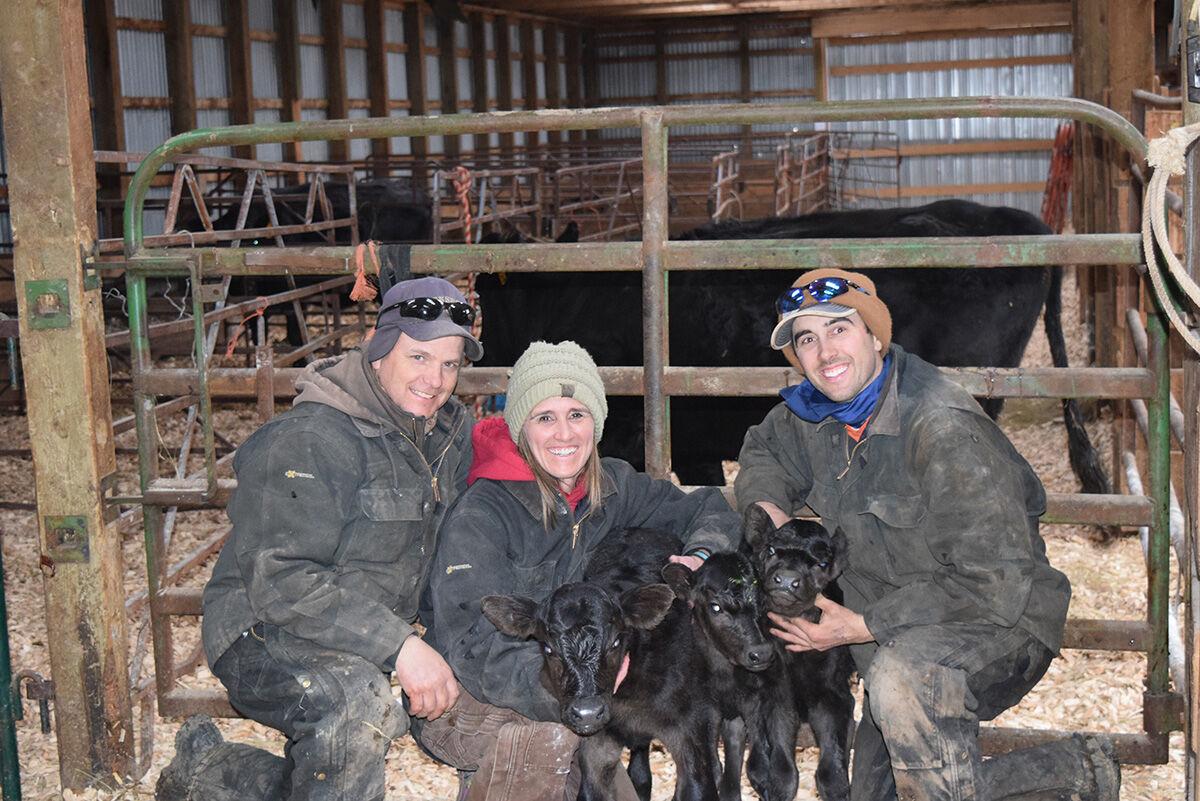 Scott, left, Tami, and Kyle Ryan are pictured with triplet calves born on March 9. The odds of triplets being born are long. Courtesy photo 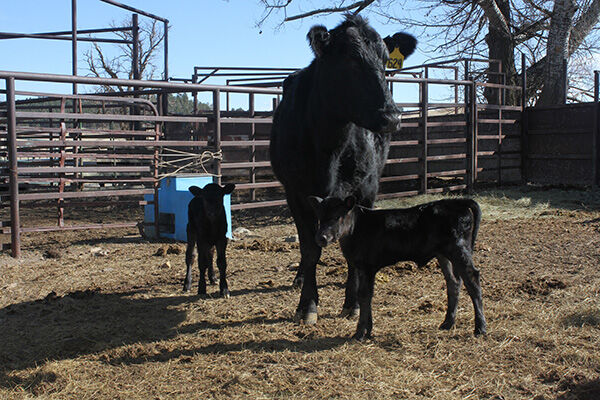 The two heifer calves remain with their mom, but their larger brother was moved to another cow to ensure plenty of milk was fed to all three. Pioneer photo by Mark Watson 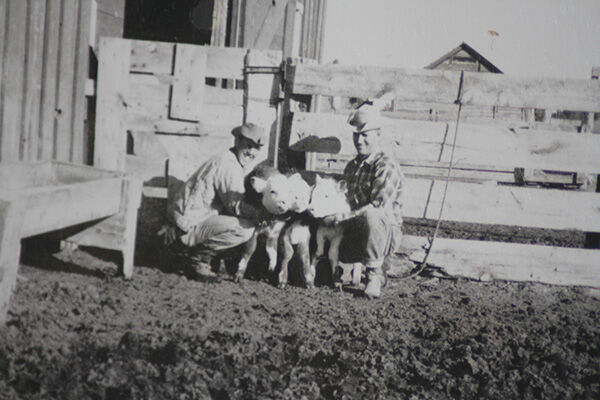 Scott, left, Tami, and Kyle Ryan are pictured with triplet calves born on March 9. The odds of triplets being born are long. Courtesy photo

The two heifer calves remain with their mom, but their larger brother was moved to another cow to ensure plenty of milk was fed to all three. Pioneer photo by Mark Watson

ALADDIN, Wyo. — Ranchers through the Northern Great Plains are in the midst of calving season right now, and that is true at the Ryan Ranch, located north of Aladdin, Wyo. But unlike nearly every other rancher this year, the Ryan Ranch welcomed a set of triplet black angus calves on March 9.

“You just don’t hardly hear of anybody having them,” said rancher Scott Ryan.

It was his wife Tami who first spotted the tiny black calves laying in the field, their mom nearby.

“I’m not going to buy it yet,” Scott recalled saying.

“Then I went and told Kyle, he said ‘yea, I thought so too’ We had to convince Scott,” Tami said.

Normally, cattle give birth to a single calf each spring; occasionally a set of twins is born.

“We just went over the hill, and there she was with all of them,” Scott said. “I had to check everything out. You just don’t see it. You see twins rarely.”

Born was a bull calf that weighed 63 pounds, and two heifers, one weighing 40, and the other only 36 pounds. The average weight of a newborn calf is 80-85 pounds.

“We were kicking pairs out,” Tami said, recalling of when she first saw the calves. “But there was nothing else around there that looked like had calved, and just the way they were laying there. At first I thought it was twins. I always knew it was possible.”

Her grandpa Walt Crago, and dad Les Crago, ran the Crago Hereford Ranch, and in the early 1970s one cow gave birth to triplets.

So what are the odds of a cow giving birth to triplets?

According to several online sources citing Kim Mullenix, an assistant professor at Auburn University and an extension specialist on beef cattle production systems, the odds are around 1:100,000.

“We have books on all the cows we’ve had for a while,” son Kyle Ryan said. “This cow, that had the triplets, her grandma had two sets of twins as a cow. Now her mom didn’t, but her grandma did.”

The cow, with the ear tag 624, is 5 years old and had never birthed twins before.

When it comes time to buy bulls, Scott keeps an eye out for those that are twins, Kyle said.

“We probably own four or five twin bulls. That could possible do something with it,” he said. “In your head you wonder, she’s probably got some of those genes, so you wonder did she meet up with one of those bulls. You never know.”

Scott said she is a good cow and attentive to her calves.

The triplets were put in a pen with their mom and were also bottle fed for a few days. Then, when another cow’s calf died, the Ryans put the bull calf in with that cow. To ensure the cow would take to the adopted calf, the dead calf was skinned, and the hide was tied to the bull calf. Both took to each other, Scott said.

“I think she would have had enough milk for (all three of) them for a while,” Scott said.

But better safe than sorry when the survival of each calf is how ranchers make their yearly income.

If another calf dies, they will likely move one of the heifers to that calf’s mom to ensure all three have ample milk.

The Ryan Ranch is a Wyoming centennial ranch, founded when Scott’s great-grandparents homesteaded it in 1910. Married in 1995, Scott and Tami run it and with their children, Kyle, Jessica, and Molly. It is now in its fifth-generation of operation.