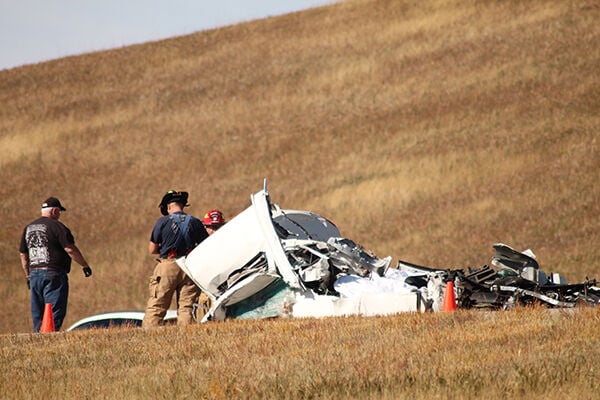 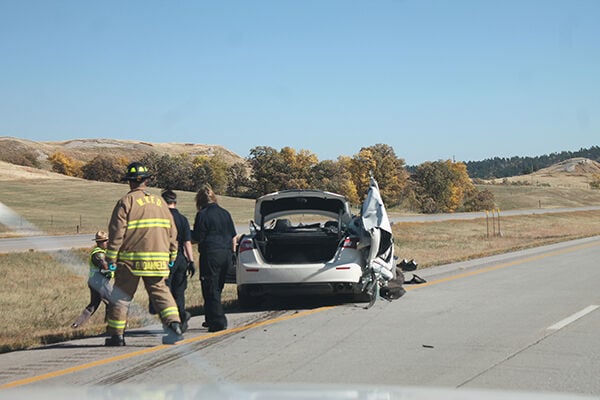 SPEARFISH — The driver of a 2015 Maserati Ghibli that was involved in a triple fatal accident shortly after 2 p.m. Oct. 6 on Interstate 90 just west of Whitewood was traveling at an estimated 147 miles per hour.

According to a recently-released report by the South Dakota Highway Patrol accident report, the driver, Jaden Olson, 21, of Rapid City, was traveling east on Interstate 90 near Mile Marker 25 in the right lane when it came upon a 2016 Freightliner Cascadia traveling approximately 65 mph in the same lane. Olson was unable to avoid the semi truck, striking it in the rear of the trailer. The Maserati went underneath the trailer, which ripped the roof off. Although Olson was wearing a seatbelt, he was ejected. The two vehicles became dislodged, and the Maserati traveled off the road to the left side of the driving lanes. The semi truck came to a rest about 1,000 feet farther down the road on the right shoulder of the interstate.

The report did not indicate if there was other vehicular traffic around the two vehicles. Also, the report indicated that both drug and alcohol tests were conducted on Olson, but the results were not obtainable when the report was filed.

Titus Ironshield, 55, Rapid City, was in the passenger seat, and Thomas Jackson, 22, Spearfish, was in the rear left seat of the Maserati. Both were killed in the crash.

Neither Vern Hill, 77, the driver of the semi truck, nor passenger Margaret Hill, 74, both of Smithwick, were injured.  Vern Hill, according to the report, was also administered a drug test but the results, like in Olson’s case, were not obtainable by the time the accident report was filed.

Tony Mangan, a spokesman for the South Dakota Highway Patrol, said this is not unusual as the tests take quite some time.

The incident began when two males, in their early 20s, attempted to make an unauthorized access into an apartment at Black Hills State University. An occupant of the apartment said, “two males, (in their) early 20s were pounding on the access door and on windows yelling for someone to let them into the building,” said Phil Pesheck, director of public safety at BHSU.

Pesheck said by the time he arrived at the apartment, the two males had left the scene. When Spearfish police officers arrived to assist, the occupants of the apartment gave descriptions of the two men, which fit two of the three individuals one of the officers said she saw leaving campus in a white Maserati.

While one of the officers made a call on the radio to other officers to stop and identify and perform a verbal trespass on the two men, police dispatch began receiving multiple complaint calls of a white Maserati speeding through town. Calls to dispatch then reported the vehicle speeding on Interstate 90.

Pat Rotert, director of public safety, said there was no known relationship to the occupants of the apartment the two men tried to access.  However, an acquaintance of one or more of the individuals lives in that building and they may have been trying to get into the building to get to that apartment.

Without being able to talk to the two men, he said police would not likely be able to determine anything new and the department is not pursuing the case further as there is no means to the ends in doing so.