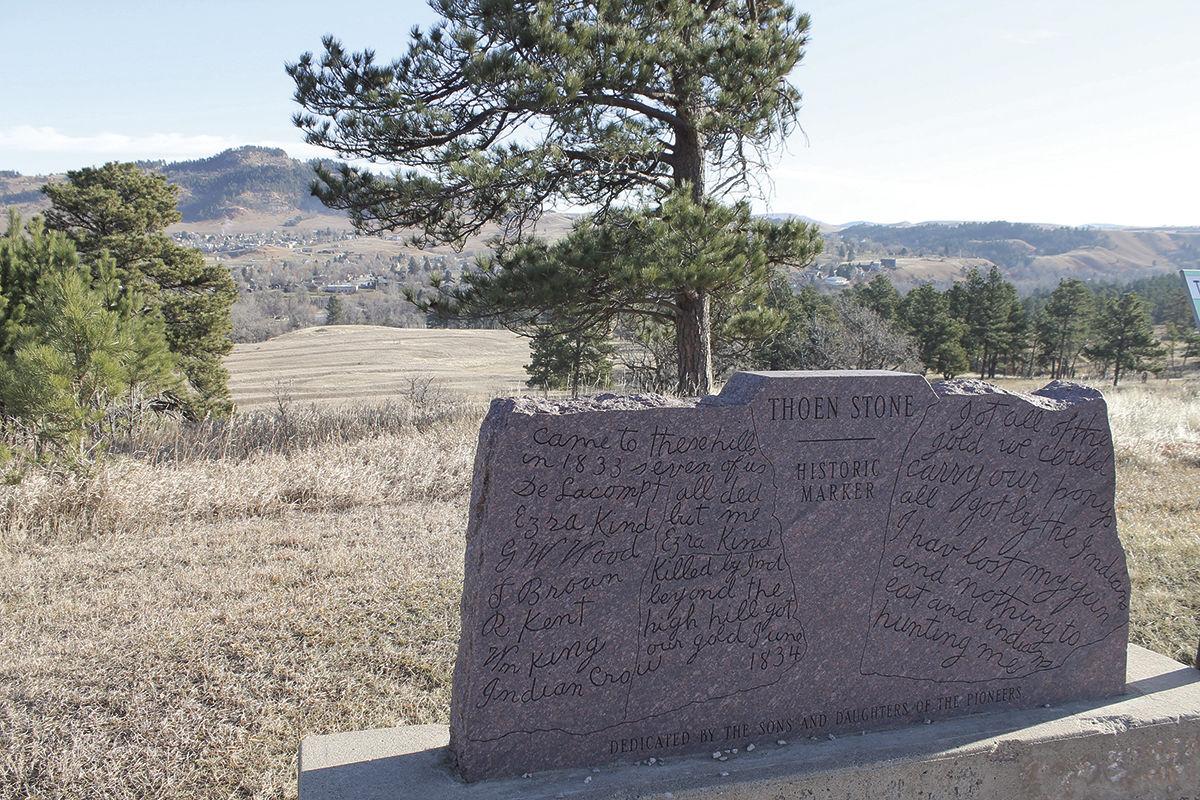 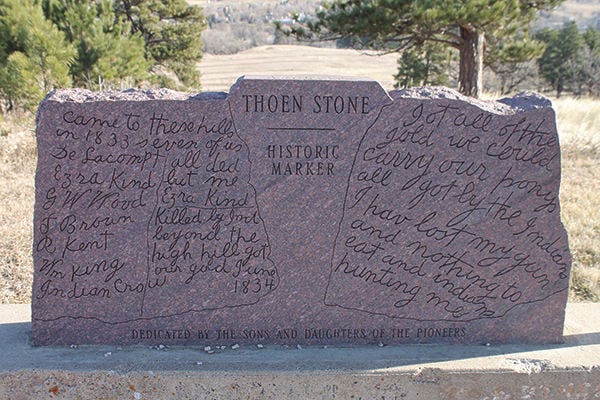 The Thoen Stone Monument serves as a historic marker as well as attractive tourist destination in Spearfish. Pioneer photo by Alex Portal

The Thoen Stone Monument serves as a historic marker as well as attractive tourist destination in Spearfish. Pioneer photo by Alex Portal

SPEARFISH – Public access to Thoen Stone Road has been thrown into question as Monday, the Spearfish City Council heard arguments from Roger Tellinghuisen, legal representative to Les and Karen Turgeon, who own property south of the Thoen Stone Monument and can only access their property via the public right-of-way.

The city argues that even though the path is a public right-of-way, it is meeting its obligation by maintaining the pathway as a pedestrian path and is not obliged to allow unrestricted public vehicle access to the monument.

“We have maintained it for what it is, which is a pedestrian path with occasional light, non-public vehicle traffic,” said Ashley McDonald, city attorney for Spearfish.

In 1971, the city approved the replating of the property into three separate lots, lot 37A, lot 37B, and lot 37C. That same year, the property owner dedicated lot 37A, which is the site where the monument sits, to the city with an easement of access through lot 37B under the condition that the city maintain the property and pathway for public use. Since then the private property surrounding the monument has passed to several different owners and was replated again in 2012, but the pathway has remained open to the public via an unlocked pedestrian gate. Because the pathway is currently the only way to access the private property on the land, the city has supplied the property owners with keys to the gate, but Tellinghuisen said the city has no right to hinder vehicle access because the pathway should be classified as a public road.

“When (the city) accepted the lot that the Thoen Stone Monument actually sits on, they also agreed by written agreement to maintain the road giving access to that monument,” he said.

Conversely, McDonald said the city never passed a resolution accepting the dedicated lot, which is necessary to categorize a road as a public street.

Tellinghuisen said that he understands the point the city is trying to make, but their interpretation of “acceptance” is wrong.

“The city argues, ‘well we never accepted it,’ yet the city had gone in and made improvements to the road,” he explained. “The (South Dakota) Supreme Court has said that act of making improvements, or taking control if you will, of the road by the city, thus turns that road into a public street or right-of-way and as such the city has a duty to maintain it.”

Several residents, who live in the proximity of the property, spoke up at Monday’s meeting expressing their concern for the type of unsavory activities that could increase if the vehicle gate were to be removed. Mark Weber, one resident who spoke, said that as of right now, lewd activities are minimized by the restricted access.

“There have been many calls and many arrests at that gate,” said Weber, who is also a sergeant on the Spearfish Police Department. “Anywhere from DUI’s, alcohol, drugs, people having sex, vandalism, (and) trespassing. Where ever they can get to, they’re going to vandalize it they’re going to do whatever they have to do.”

The council took no action on Monday; however, Tellinghuisen said if the property owner’s demands were not met he would have no choice but to file suite against the city.

“There will be no action on this tonight because we will review it and ponder, for sure, and come back to you on this,” Mayor Dana Boke said.

The Thoen Stone Monument is a replica of a sandstone slab, which had been supposedly  inscribed with the ill-fated tale of a group of pioneers who came to the Black Hills in 1833 to hunt for gold, however, found themselves hunted and subsequently killed by angry Native Americans. Ezra Kind, the last remaining member of the party, etched the tragic tale into the stone.

“I hav lost my gun and nothing to eat and Indians hunting me,” Kind wrote.

The monument overlooks the site at the base of Lookout Mountain where Louis Thoen discovered the slab in 1887.