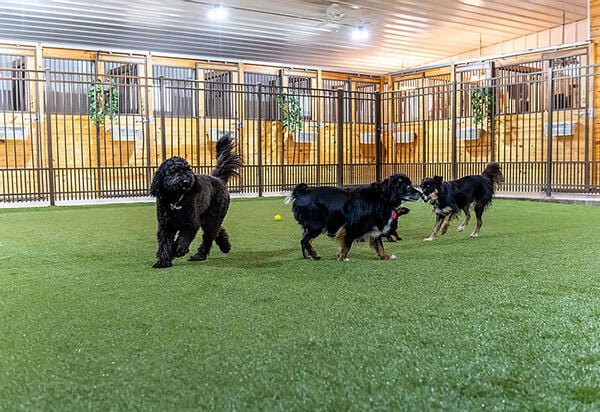 Woofers features both an indoor and outdoor play area for dogs. Courtesy photo 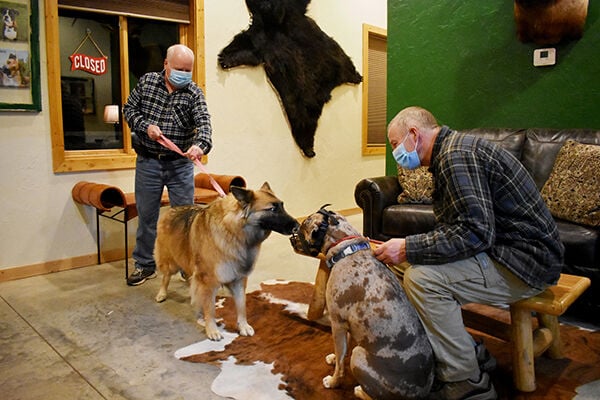 Jayme Feary, right, sits with a dog he is training while a customer picks up his dog at Woofers Pet Resort in Sturgis recently. Feary and his partner opened the pet resort in mid-November. Pioneer photo by Deb Holland

Woofers features both an indoor and outdoor play area for dogs. Courtesy photo

Jayme Feary, right, sits with a dog he is training while a customer picks up his dog at Woofers Pet Resort in Sturgis recently. Feary and his partner opened the pet resort in mid-November. Pioneer photo by Deb Holland

STURGIS — Jayme Feary’s grandfather called animals by the sound they made.

A mule was a brayer, a cow was a mooer, a horse a neigher and dog, of course, was a woofer.

It only made sense that when Feary opened a pet resort, that he would name it Woofers. That upscale pet resort, owned by Feary and his partner, Connie Otso, has been open in Sturgis just off Vancocker Canyon Road since mid-November.

“I was raised on a ranch, so I spent a lot of time working around animals of every type. I think that’s where my love of animals started,” Feary said.

He trained his share of horses while living in Wyoming and people began asking him if he ever trained dogs.

“I started out doing it for free and it sort of developed,” he said.

People then asked if he would consider boarding their dogs and it morphed into a business in Jackson, Wyo. He and Otso decided to seek out a new location and they have converted the former Dogwood Lodge into a luxury dog boarding facility.

Woofers is like a second home to pets, a place where they can enjoy plenty of exercise, social interaction, fun, and personal attention while under close supervision 24/7, Feary said.

Feary spent a year and a half traveling throughout the west trying to figure out where he wanted to locate his pet boarding business and chose Sturgis because he saw such potential in the former Dogwood Lodge.

“The stars sort of aligned here and people have been really nice,” he said. “The people who started this (Dogwood Lodge) are really wonderful and have been tremendous to us. They did such a good job of building a quality facility. I immediately saw what we could do to it to take it to the next level.”

He spent the first months in the new business adding a two-thirds of an acre fenced-in run for the dogs, changing out the artificial grass turf in the indoor play area to K9Grass, and adding designer touches to the doggy suites.

There are three levels of boarding for dogs:

The Economy has an off-ground comfort cot in a generous-sized 6-foot by 6-foot room. Your pet can even bring their own blankie for security.

The Suite has an in-room television (yes, dogs love to watch TV, too), a designer bed with a human-quality memory foam mattress, and wall art. There are 6-foot by 6-foot, or 6-foot by 10-foot suites.

The Kennel-free Penthouse is the ultimate in luxury. This suite will pamper your pet beyond anything a regular kennel can offer. Its no-cage, no-kennel floor plan allows your dogs to sleep with their friends with an in-suite attendant to tend to their every whim. Feary said you should think of it as a slumber party for dogs.

In doing research on opening an up-scale pet resort, Feary said he found that people wanted options for accommodations.

“Just like for hotel rooms, some people want the cheapest basic room they can get and some want the nicest they can get,” he said.

Feary said the trend of treating pets like family is cresting, with the pet industry the second-fastest growing behind only consumer electronics.

Another trend in boarding is cage-free, kennel free accommodations. That is why Woofers offers the penthouse.

“It has evolved to the point now where the rooms are nicer with better options. They want it to be exactly like home,” he said. “We built it to mimic like an extended-stay hotel room. Our staffer will live in there which means your dog has someone with them overnight. That’s really personal attention.”

Feary understands the commitment it takes to run a boarding business, and says he continues in this business because he loves the animals.

“It’s very demanding time-wise. It’s sort of like being a middle school principal of a school where the students never leave and you never leave,” he said.

While in Jackson, Wyo., Feary said he built a reputation for quality customer service and made pet play the centerpiece of his business.

“It’s all about having fun,” he said.

The dog run and play area has been everything Feary hoped for and more.

“Few things are as exciting for a dog as a large outdoor expanse to play in,” he said.

And when the weather doesn’t cooperate, Woofers has a large indoor play area for pups.

The K9Grass is state-of-the-art turf which rests on a soft cushion of plastic risers which provide a safe, joint-friendly surface to play on, Feary said. Pipes underneath the turf flush urine and water into an inline drain. There’s no rubber or sand infill, so the turf stays dry and urine-free. Feary said it smells as great as it looks.

Why should someone take their dog to Woofers?

“If people want to feel and they want their dog to feel like their boarding place is a second home, that’s who we are,” Feary said. “We sort of consider ourselves the aunt and uncle of the doggies. We’re the anti-kennel place.”

Feary says Woofers mission is to be a light to pets, their customers, employees and the community.

And, by the way, Woofers does board cats also.

Pet board businesses across the country have been hit hard by the pandemic because people have been relegated to staying home to stay safe.

Feary hopes that a “new normal” will arrive sooner than later when people can begin to travel again and place their dog or cat at boarding businesses.

“We might be the dumbest people in America for starting a travel-dependent business during a pandemic,” he said. “We’re either going to look back and say, ‘hey that was genius or that was the dumbest thing we ever did.’”