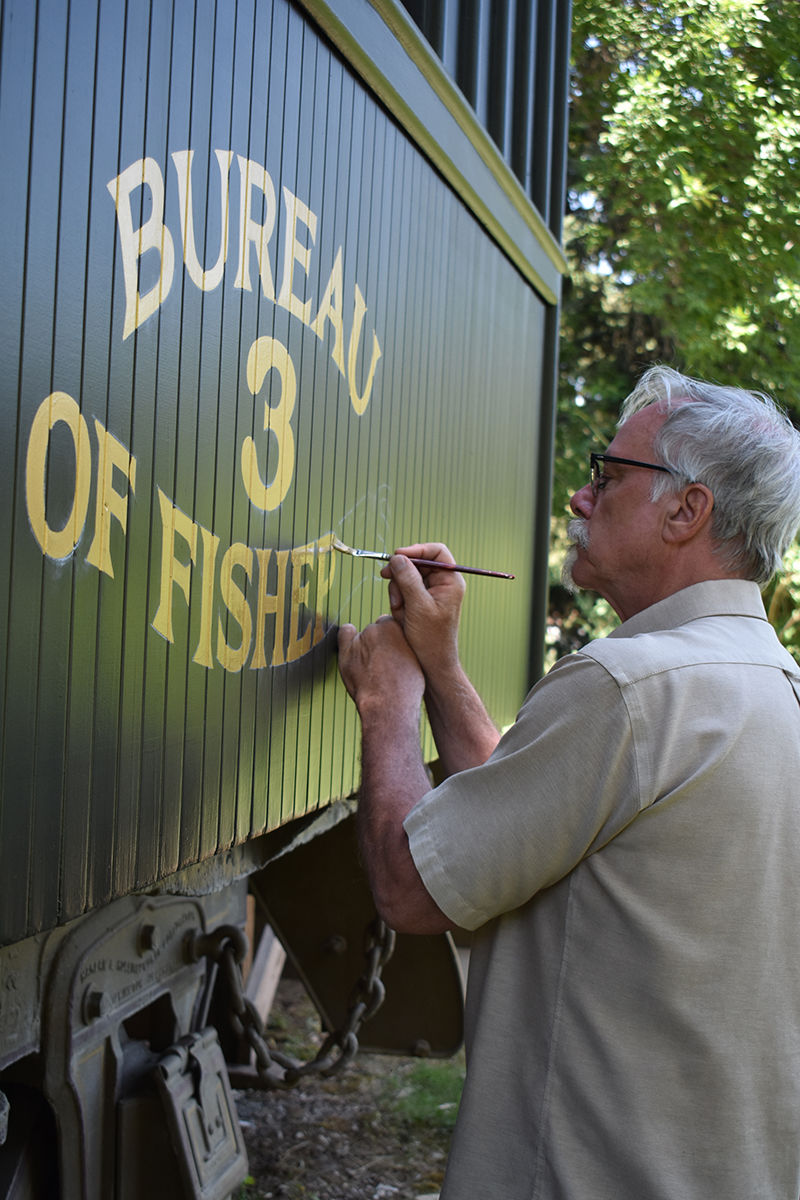 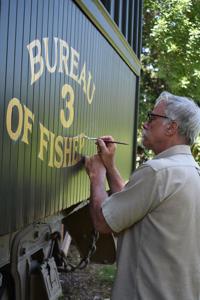 Twenty-one years after painting the original signage on the rail car at the D.C. Booth Historic Fish Hatchery, Tim Peterson is working with his son, Bill, this year to spruce up the paint. Pioneer photo by Wendy Pitlick 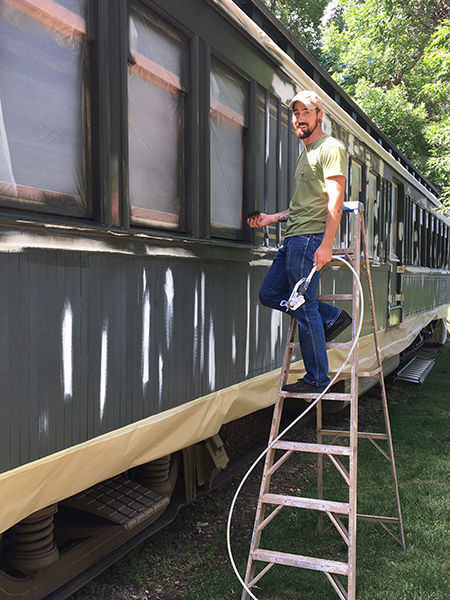 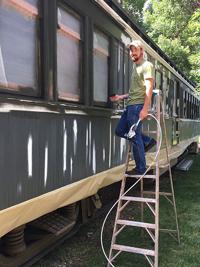 Bill Peterson works on painting the base coat of the rail car. Courtesy photo

Twenty-one years after painting the original signage on the rail car at the D.C. Booth Historic Fish Hatchery, Tim Peterson is working with his son, Bill, this year to spruce up the paint. Pioneer photo by Wendy Pitlick

Bill Peterson works on painting the base coat of the rail car. Courtesy photo

SPEARFISH — In 1999, local sign painter Tim Peterson helped paint a former passenger rail car when it was converted into a historically accurate replica of the U.S. Bureau of Fisheries Car No. 3, one of the nation’s original fish cars.

Now, 21 years later, Peterson is recreating his original artwork to restore the signage on the car, the pinstriping, and other painted details that create a historically accurate depiction of the rail car.

“The artwork I am doing now, the lettering and the striping, is based on a model that is in the museum,” Peterson said of his original artwork on the rail car. “I made drawings of the rail car in the museum and I’ve got those drawings in my files. I redrew them in full size and applied them to the rail car, and copied what I saw off the model. That was my template.”

Hatchery Superintendent Carlos Martinez said the rail car is a replica of the original Fish Car No. 3 from 1884, which were once the U.S. government’s way of quickly transporting fish and their eggs to lakes and hatcheries across the country. The 10 original fish cars were recycled during World War II for materials. Thus, a passenger rail car was converted into a historically accurate fish car — based on an original architectural model from 1898. The fish car helps to effectively tell the story of hatcheries.

“This is U.S. Bureau of Fisheries Car No. 3. It’s the only replica of a federal fish car in the country,” Martinez said, adding that the rail car is important to the history of fisheries across the country. “We get people from all over the country coming here just to see the rail car. Train enthusiasts, fisheries historians, they come here specifically to see this. Then they see the rest of the facility and they fall in love with it.”

Since the fish car is so important to telling the story of fisheries across the country, including D.C. Booth Fish Hatchery, Martinez said it is important to keep it maintained, and part of that is doing regular painting. Peterson said he was thrilled to restore his original artwork on the rail car.

“It was looking kind of shabby,” Peterson said of the paint job. He added that he is especially happy to work on the project with his son, Bill. Peterson primarily paints signs with his business, Flat Earth Art Company. But Bill Peterson’s painting business — Peterson Painting — focuses more on exterior painting and finishing. Because of the different nature of their businesses, Tim said this is the first project they’ve done as a father-son team.

“That was pretty interesting to me,” he said. “This is the first time we’ve done our own thing.”

Martinez said he is thrilled to have the Peterson team help with the restoration, especially with Tim as the original artist.

“Anytime you can have the same artist, and the same methodology, and the same paint, it’s good,” he said. “We called him to do this. I knew he had done the work on here and I had worked with him on some other projects. I approached him before we even knew we could pay for it and got a quote. Things fell together. We’re super excited to have him work on this.”