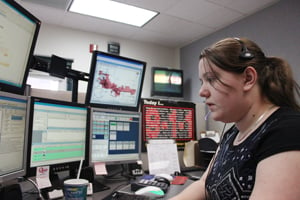 Alexis Nelson mans the dispatch center for the Spearfish Police Department. City and county officials are weighing the benefits of a Reverse 911 system that would allow law enforcement or city officials to contact the public for mass notification. 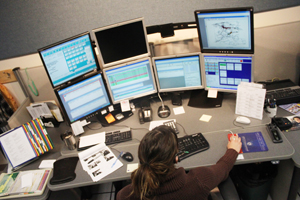 Rochelle Ritter, a dispatcher with the Spearfish Police Department, monitors five different computer screens during a recent shift at the Spearfish call center.

Alexis Nelson mans the dispatch center for the Spearfish Police Department. City and county officials are weighing the benefits of a Reverse 911 system that would allow law enforcement or city officials to contact the public for mass notification.

Rochelle Ritter, a dispatcher with the Spearfish Police Department, monitors five different computer screens during a recent shift at the Spearfish call center.

NORTHERN HILLS — Law enforcement and emergency management officials in the Northern Hills have been weighing the pros and cons of a Reverse 911 calling system for years, but they have yet to jump on the bandwagon.

Officials are fully aware of the benefits, but finding a cost-effective system that meets each community's needs hasn't been an easy task.

Leah Rafferty, dispatch supervisor at the Spearfish Police Department, said there have been many times the city could have utilized an emergency communication system, but the variety of systems out there and the associated costs has prevented the city from making the commitment, she said.

“The pros far outweigh the cons,” she said. “Reverse 911 is the best way to reach a vast amount of people in a short amount of time.”

Reverse 911 is a specific brand name, but the police-to-citizen communication system is commonly referred to as Reverse 911, regardless of the brand name.

The system can also be used for something as simple as reminding residents to vote, or notifying citizens about planned outages, street closures or a water main break, she said.

“Annexation is a big deal in Spearfish right now. We could notify everybody that we're having a community meeting,” said Rafferty.

The costs vary as much as the programs differ, she said. One system, for example, charges by the number of minutes used for calls. The cost is just under $7,000 a year for 12,500 minutes, said Rafferty.

Another system is maintained off-site and entities pay an annual fee for maintenance of databases and mapping.

Emergency Communications Network is a company that offers reverse calling services. It also transmits messages through popular social networks such as Facebook and Twitter.

Rafferty said the city needs to consider message criteria and options for notifying residents — whether to allow landlines only, or to include cell phones and text messaging — and whether citizens could be allowed to sign up for all forms of notification. The length of each message and how many are distributed will all play a role in how much the system will cost, she said.

“We can go to a map and circle an area we want to notify and it will call those people,” she said. “The systems we've looked at are fairly user friendly. Most are as easy as getting on the Internet or leaving a message in the service. Then we just hit a button and send it out to everyone — or to people in certain areas of town, depending on the message we're trying to get out."

Currently, Spearfish relies on a warning siren to notify the public of severe weather or other emergencies that require immediate attention, said Rafferty.

Other cities in the Northern Hills also rely on a warning siren or distributing emergency information through media outlets, such as newspapers, television and radio. While that form of distribution has been adequate for the most part, the notifications are only as effective as the limited audiences each outlet reaches.

Tom Sandvick, the E-911 coordinator for Lawrence County, said Reverse 911 is something the county has discussed for many years.

Like Rafferty, county officials have researched dozens of different systems and have weighed the pros and cons of having a way of notifying the public on a large scale during times of emergency.

For Lawrence County, cost has been the most prohibitive factor, said Sandvick. The county currently pays $1,500 monthly just for automatic telephone number and location services.

That's just one cost associated with their system. The county utilizes a number of different programs to try and make their emergency response as fast and effective as possible, he said.

"We have to buy new 911 equipment every four to five years to keep current with updates," he said.

The county is already facing a $90,000 cost in the next couple years to upgrade its current phone system to include text message notifications and more sophisticated cellular phone GPS tracking, said Sandvick.

The cost to incorporate a reverse notification system is considerate, he said.

He was told the cost to one neighboring county for a single message transmission was $2,000.

School districts in the Northern Hills use an emergency notification system called SchoolReach to notify students and parents of late starts, early release and school cancellations.

He incorporated SchoolReach as a communication tool while superintendent. Of the 170 school districts in South Dakota, 150 utilize the SchoolReach system, he said.

O'Dea said the notification system is a great tool in being able to quickly contact student, parent and staff. SchoolReach sends messages via telephone, text and e-mail.

While schools previously relied on phone trees, O'Dea said there is a high failure rate.

"If one person forgets to call or is gone, the chain ends," he said.

He said SchoolReach is effective because it can be programmed to contact certain groups within the school for different purposes.

It's also cost effective, charging $1 per student, he said.

O'Dea referenced a recent incident when the Brandon Valley school district used the program to notify parents of students traveling to the West Coast on a bus who got caught in a blizzard.

"The system called back every 45 minutes to update the parents and let them know everyone was safe," he said.

Spearfish Superintendent of Schools Dave Peters has nothing but praise for the SchoolReach system.

"It's a great tool for us and one of the better things we've done as far as parent communication and school safety," he said. "All we do is record a message, tell it what time to send the message and it makes all those phone calls."

“We also have a cyber bullying tip line available to students and families that is provided by SchoolReach,” said Leikvold.

Rafferty and Sandvick both believe the communities will eventually integrate a reverse calling system. It's just a matter of when.

"We've had some tight budget years and really had to pick and choose what we can purchase," said Rafferty. "We realize how important this is. Hopefully in the next several years this is something we can bring into play."