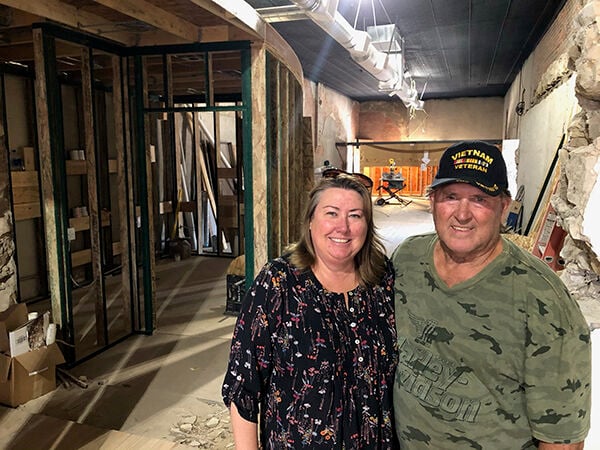 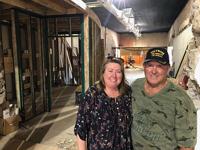 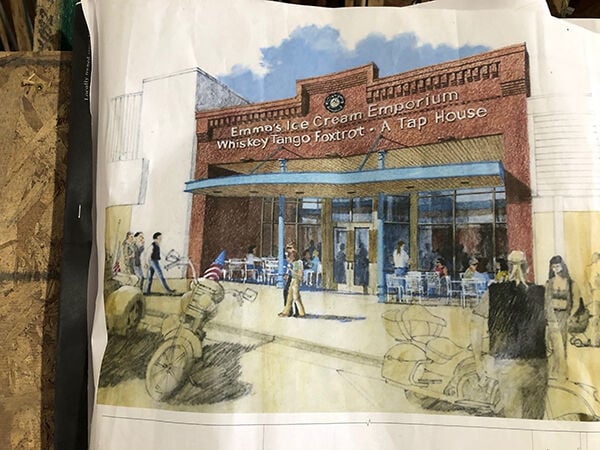 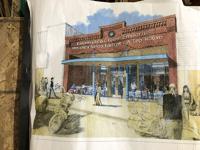 Top, An artist’s drawing of what the front of Emma’s Ice Cream Emporium will look like. Courtesy photo

Top, An artist’s drawing of what the front of Emma’s Ice Cream Emporium will look like. Courtesy photo

STURGIS — Amy Groves is not a Sturgis native, but she loves the town just the same.

The Las Vegas businesswoman and her husband, Mike, who operate a successful real estate business, came to the Northern Hills community for the Sturgis Motorcycle Rally, but stayed because of the people.

“People are so much friendlier here in Sturgis. When you walk down the street, you can make eye contact with someone and they don’t look away. They will actually say, ‘good morning,’” Groves said.

Coming to Sturgis is a chance to relax instead of stressing about life, she said.

The Groves bought The Buckle building on Main Street Sturgis and have been working to transform it.

Groves said it is actually two buildings, built front and back.

They plan to make the front part which faces Main Street a dessert emporium.

“It will be all things dessert. We will have ice cream, cakes, cookies, pies, all kinds of stuff. And, we’re going to bake bread every day,” she said.

Emma’s Ice Cream Emporium will serve a continental breakfast daily. Because they will be open year around, in the winter, they hope to offer warm desserts to entice locals to come downtown, Groves said.

The Emma reference in the name of the establishment actually is Groves’ English Bulldog.

“She got naming rights,” Groves joked.

At the back of the building, the Groves are creating an automated tap house. Patrons check in and get a card which when waved in front of each tap will record the amount of brew purchased.

“You can pour as much or as little of the each of 26 different beers as you like,” she said. “You can taste a little of everything or be committed to one. It’s charged by the ounce.”

The Whisky Tango Foxtrot Tap House will be military themed in honor of Groves’ husband, Mike, who is a retired sergeant major.

“The building itself kind of looks like a bombed out Italian building. We left that purposely so it looks very rustic. That will play against a shiny stainless steel bar system,” she said. “It will be just a nice place to hang out. It’s not going to be loud with music or a band. It’s just going to be a cool place to hang out.”

The beers on tap will be more local than regional, Groves said.

“We’re not going for any of the major name brands. We will be doing events with each of the different beer makers to come in and talk about their craft beer,” she said. “We’re still going over the final list, but we’re looking at beers from five or six states around South Dakota.”

In the basement of the building, the Groves are creating an event space that can host up to 40 people.

“We can do parties and cater in,” she said. “Whoever needs a little meeting space that’s private, we can help them.”

Groves hopes to have both businesses open before this year’s Sturgis Motorcycle Rally.

“We’re right now two months behind, and if we were open by July 30, I would be thanking the stars above,” she said.

Groves and her husband had been longtime Rallygoers and were married by former Mayor Cliff Linn on Lazelle St. in Sturgis in 2005.

“We’re Rally people,” Groves said. “But once we got married, we decided that we would come back every year for our anniversary. Since ’05, we’ve only missed two years,” she said.

Groves realized one year when they were staying at an expensive hotel in Deadwood during the week of the Rally that she and her husband could be paying a mortgage for what it cost for one week at the Deadwood hotel.

The Groves own a Remax Real Estate franchise in Las Vegas, NV.

“My whole life is real estate. So, I was doing the math on what we were paying. We could have been paying a mortgage on a house in Sturgis the entire time,” she said.

The couple found a house for sale on Dudley Street north of the Iron Horse Saloon and purchased it. They made improvements and sold it last year after having it for four years.

They then bought another home on Dudley.

“Since then we have flipped nine houses and we have one closing Tuesday on 12th Street. We just bought one on 3rd Street a couple months ago that we have started on,” she said.

Then last year, Groves noticed The Buckle building was for sale. They contemplated opening a business, but called Mayor Mark Carstensen to find out what businesses the community might support. He said the city had recently done a survey asking that question and an ice cream shop was on the list.

“There were quite a few things listed. So, we just decided on an ice cream shop. We figured we had enough skill and knowledge to do it. I worked in an ice cream shop when I was 15. It can’t be that hard to remember from 40 years ago,” she said, laughing.

The building will be amazing when it is done, Groves said.

But The Buckle building is not the only one the Groves have purchased. They close later this month of the old Massa Berry clinic building.

Groves said she invited her dad, Ed Cox, to come to town and check out The Buckle building and he learned the Massa Berry building was for sale. He envisioned the building being used as office space for small businesses in town.

She relented and plans to open a business center in the near future. The former medical building has varying sizes of offices which will be leased. There will be different levels of service. Some may just want to rent a space, while others may want a common receptionist who can answer phones for their business. There also will be copy machines and shipping services.

“You look like you are a bigger company than you are, but at the end of the day you still have a 10 x 10 office,” she said.

The concept for a business center came from working in Las Vegas.

“The very first office I ever used for my brokerage was an executive office,” she said.

Las Vegas has thousands of such business centers, Groves said.

Since then, Groves and her dad have created Sturgis Development LLC, in hopes of revitalizing downtown Sturgis.