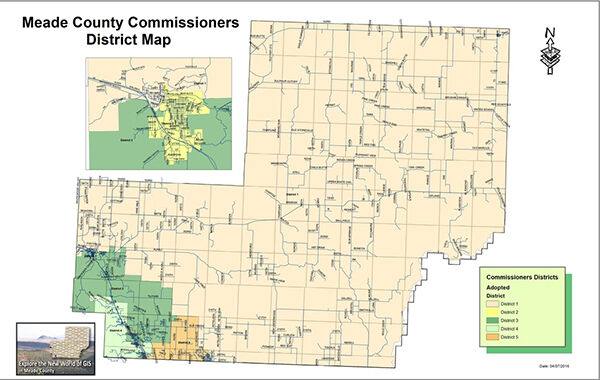 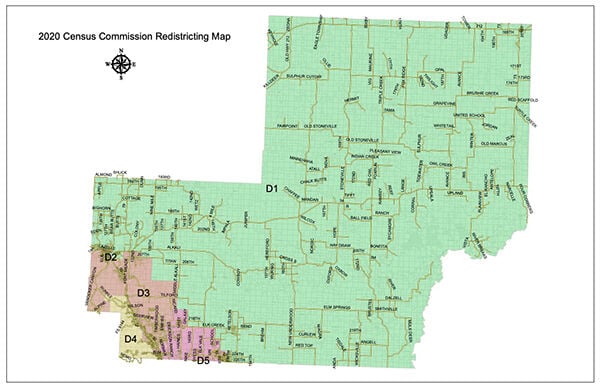 STURGIS — The reconfiguring of commission district boundaries has begun in Meade County.

Following a census, South Dakota state law requires the board of county commissioners to adjust the boundaries of the commissioner districts to accommodate shifts in population and ensure equal representation to all residents of the county.

The county has until February to adopt the new commission district map.

“I think it would be better if this were completed this year rather than the February timeline,” said Meade County Commissioner Rod Bradley.

“This is just one draft. … This gives us a starting point of how to work through this process and get to the right solution.”

The commission took no action on the matter at their meeting Oct. 26.

With the new population numbers, the county is looking at a distribution of about 5,970 people in each of the five commission districts.

The populations of the districts with the 2020 census numbers are:

District No. 1 – 6,153 (Need to reduce population by 183) This district includes most of Meade County east of Sturgis and north of Interstate 90. It also includes a sliver of areas adjacent the Sturgis city limits. The current District No. 1 commissioner is Rod Bradley.

District No. 2 – 5,264 (Need to add population of 706) This district includes nearly all of the city of Sturgis. The current commissioner for District No. 2 is Doreen Creed.

District No. 3 – 6,360 (Need to reduce population by 390) This district is south of Sturgis along Interstate 90. The current commissioner for District No. 3 is Talbot Wieczorek.

District No. 4 – 6,472 (Need to reduce population by 502) This district is south of Sturgis along Interstate 90. The current commissioner for District No. 4 is Commission Chairman Ted Seaman.

District No. 5 – 5,603 (Need to add population of 367) This district is north of Interstate 90 near Rapid City it includes areas along Haines Avenue, Elk Vale Road and Box Elder. The current commissioner for District No. 5 is Rich Liggett.

Commission Chairman Ted Seaman said he would like to speak with staff from the Equalization and Planning department, who are working on reconfiguring the commission districts, before making any comments on the proposed changes.

“The public needs to understand that this is just the planning stages. These proposed maps are subject to change at some point,” Seaman said.

Auditor Kevin Forrester said his office will be working diligently on the total voter system concerning the redistricting.

“We’re going to have to work pretty hard on that to get that where everybody is happy,” he said.

Forrester said he would work with the GIS team to get the correct data in the system concerning population and voting districts.

The auditor’s office will need to update voter information to reflect the new commission districts.

Commissioner Doreen Creed said one thing that would be helpful would be to have an overlay of the current precincts with the proposed new commission districts.

“Hopefully we will have fewer precinct splits,” she said.

Creed said that particularly in the Piedmont area there are some precincts that need to be reconfigured.

Commissioner Talbot Wieczorek said some precincts have so many more people than others that there is a line out the door at the polling place on election day while others have just a few voters at any given time.

“I think a couple of those precincts have gotten really population heavy,” he said.

But splitting precincts would mean the county would need more poll workers.

Forrester said he has done some research and determined that if the wait at a polling place is more than 30 minutes, then the county should look at splitting the precinct.

You can find detailed maps of all the proposed commission districts at https://go.boarddocs.com/sd/meade/Board.nsf/Public