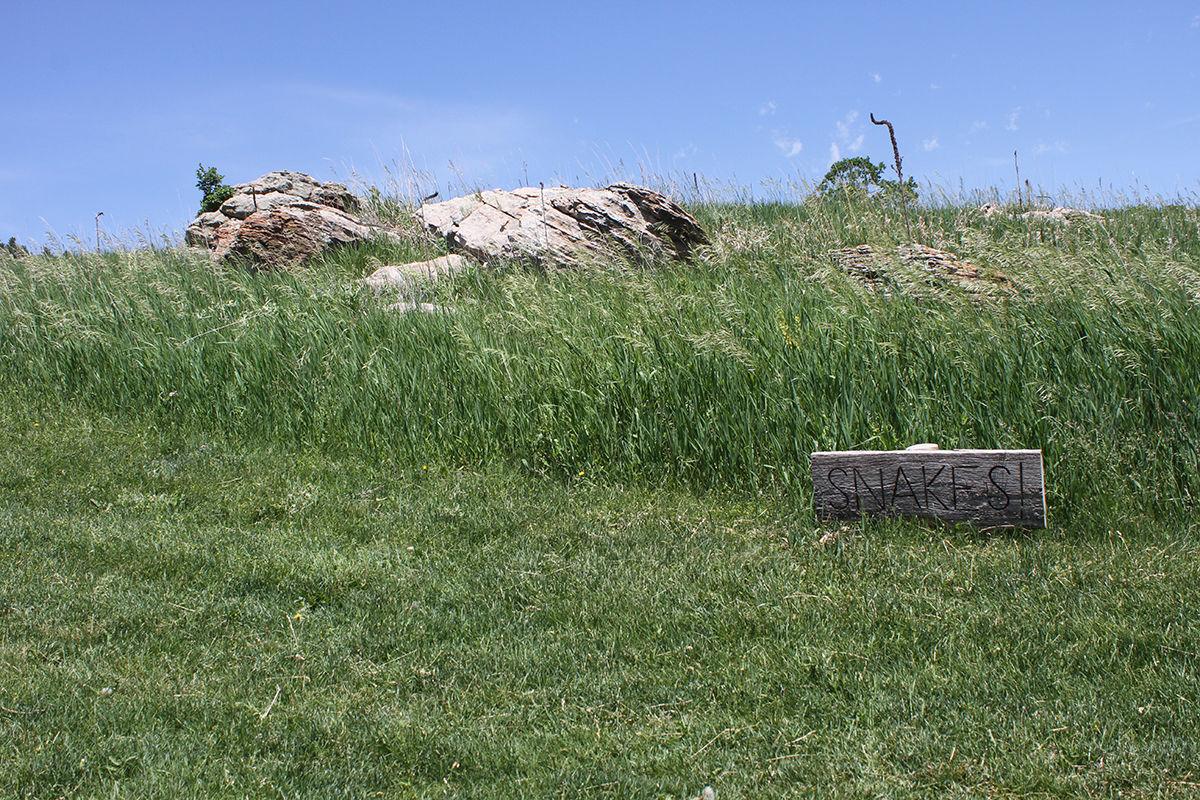 Signs like this are posted around tall grass areas at Elkhorn Ridge Golf Course to warn golfers of the potential danger of snakes. Pioneer photo by Mark Watson 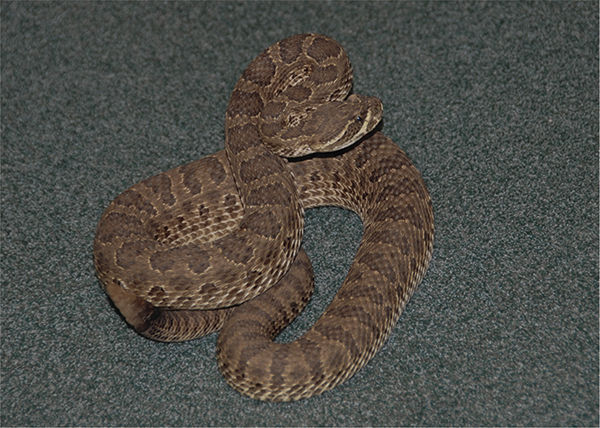 An Illinois man, visiting the Black Hills died Monday after being bitten by a prairie rattlesnake like the one pictured above. Courtesy photo by Dr. Brian Smith, BHSU

Signs like this are posted around tall grass areas at Elkhorn Ridge Golf Course to warn golfers of the potential danger of snakes. Pioneer photo by Mark Watson

An Illinois man, visiting the Black Hills died Monday after being bitten by a prairie rattlesnake like the one pictured above. Courtesy photo by Dr. Brian Smith, BHSU

SPEARFISH — A visitor to the Black Hills died after being bitten by a rattlesnake at Elkhorn Ridge Golf Course Monday.

“We do have areas marked with snakes on the golf course,” Mike Mendelson, golf pro at Elkhorn Ridge Golf club said. “Unfortunately he was in an area that did have some snakes and was bitten.”

Mendelson said that the man, who was described as 70 from Geneseo, Ill., was looking for a wayward ball in the tall grass around hole number five when he was bitten on the ankle. The man was rushed back to the clubhouse in a cart where another employee performed CPR until an ambulance from Spearfish arrived.

“We were actually kind of shocked to hear that he didn’t make it,” Mendelson said.

The emergency room at Spearfish Regional Hospital does have rattlesnake antivenom on hand, but it was not known if it was used on the golfer.

Mendelson said Elkhorn Ridge intends to post more signs warning golfers of the potential danger of snakes lurking in tall grass, and will be adjusting policies so that tall grass area’s will be treated as lateral hazards so golfers will have the option to take a penalty rather than starting over at the tee box.

“That is just super unusual,” said Dr. Brian Smith, professor of biology at Black Hills State University. “That’s the first case of rattlesnake death (in the Black Hills) that I’ve heard of in 21 years.”

A hiker was bitten earlier this spring on the Bear Butte hiking trail. That bite was not fatal.

Smith explained that while prairie rattlesnakes can be found throughout the Black Hills, they are not as life threatening as their much larger diamondback cousins.

“Their venom is kind of potent, but they are also smaller than a lot (of other rattlesnakes) and they don’t cause a lot of deaths.”

Smith said that due to their smaller size prairie rattlesnakes generally don’t produce as much venom so someone who is bitten is much less likely to die from their bite.

“Generally if you get bit on the hand for example, your arm will swell up, and you’ll be in intensive care unit (ICU) for two or three days,” Smith said. “I’m sure it hurts and it is potentially life threatening, and you do have to be watched carefully, but most of the human bites that I’m familiar with that’s about it.”

Though deaths occurring from a prairie rattlesnake bite are extremely rare, Smith did offer a couple potential theories as to how the man bitten at Elkhorn Ridge was killed.

“One of the things that can happen with those bites,” he said. “If the snake just gets lucky and the guy unlucky and the fang pierces the vein, that venom pulses through that body literally in one or two heart beats. Another thing is you can have an anaphylactic reaction to it like you would with any sort of venomous animal … the venom plays its part, but a lot of it is just the fact that the person might have just been allergic to rattlesnake venom and would not have had that kind of reaction if he had not been allergic because anaphylactic shock can kill you.”

It was not immediately known the exact cause of death.

At almost the same time as the man at Elkhorn Ridge was bitten, another golfing group was having their own close encounter with a rattlesnake.

Lori Kirk and three of her friends were golfing at the Boulder Canyon Country Club when they found a prairie rattlesnake warming itself on the golf cart trail.

“I ran over it,” she said. “It went between my wheels and then we heard the two girls that we were with behind us screaming and heard the rattle.”

The foursome back tracked to warn the group behind them and to notify the clubhouse, then continued on with their day. Later at home, Kirk said a friend informed her that he had killed the snake.

For more information about snake safety contact Dr. Smith at

Generally not aggressive, rattlesnakes strike when threatened or deliberately provoked, but …