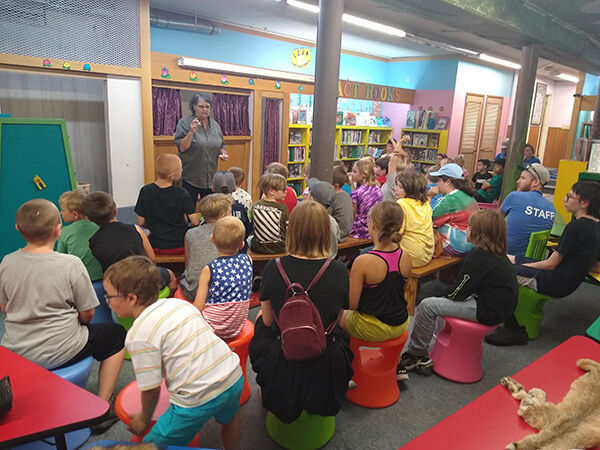 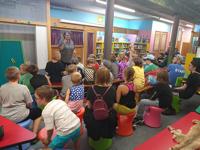 Laurie Root from the South Dakota Game, Fish & Parks Outdoor Campus in Rapid City gives a presentation about the animals in the Black Hills as part of the Lead library’s summer reading program. 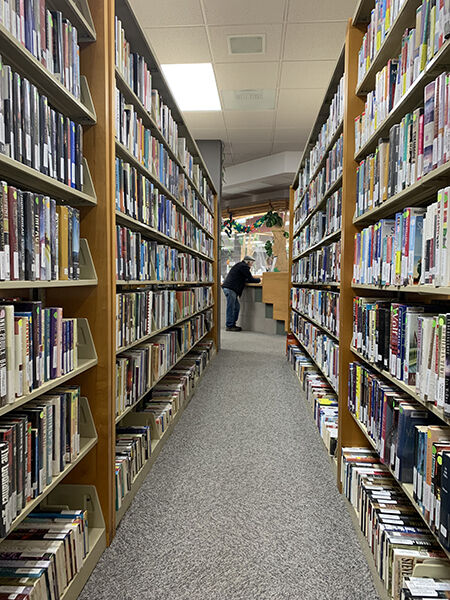 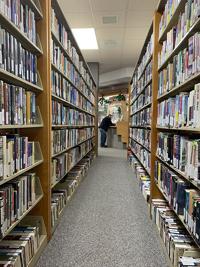 A patron of the Grace Balloch Library in Spearfish seeks assistance from staff members.

Laurie Root from the South Dakota Game, Fish & Parks Outdoor Campus in Rapid City gives a presentation about the animals in the Black Hills as part of the Lead library’s summer reading program.

A patron of the Grace Balloch Library in Spearfish seeks assistance from staff members.

LEAD — Libraries in Lawrence County will have to cut back services if the county cuts their budget, and if that happens residents and visitors will lose out on much more than just books, library directors say.

In August, the Lawrence County Commissioners rolled out a proposed budget plan that would cut funding to the county’s four libraries in Spearfish, Lead, Deadwood and Whitewood by 10%. The proposal is a rollback from what librarians say was the commission’s original idea to phase out library funding altogether, cutting 30% a year for three years.

By comparison, libraries also receive city funding in the amounts of $173,230 in funds and $63,000 in in-kind contributions such as cleaning, building utilities and other city services in Spearfish; $170,224 in Deadwood; $147,897 in Lead; and $27,900 in Whitewood. The city and county revenue is used to pay general expenses for staffing, programming, book and material purchases, building and facilities maintenance, and more.

Other miscellaneous library funding sources come from fundraising and grants, which directors say are typically used to enhance programming such as the summer reading program for youth.

Libraries in Lawrence County provide access to books, audiobooks, movies, and other printed and digital materials, Internet and Wi-Fi access, historical research resources, copying/FAX/scanning services, programming for all ages, tax and other governmental information, meeting spaces for all ages and interests, and more. Additionally, Amber Wilde, director of the Grace Balloch Memorial Library in Spearfish, said all four libraries recently joined the Black Hills Library Consortium, which provides a broader access to materials across a network of libraries while substantially reducing operating costs.

On Tuesday, Lawrence County Commissioners are expected to hold a public hearing to discuss its final budget numbers. Library directors say if the 10% cuts are implemented, libraries will not be able to spend as much this year on digital and physical materials, and some may be forced to limit hours, cut back on staffing, or reduce other services.

If county funding is completely pulled over three years, as Wilde said was the original proposal, the loss of services would be much more drastic, and county residents would likely be charged to receive services. If that happens, Wilde said Lawrence County would become the only county in the Black Hills region that did not offer free library services for its residents. Wilde added that the library association has not been updated about future plans for county funding since the originally proposed 30% reduction for 2022 was changed to 10%. This, she said, forces librarians to consider all possible scenarios of funding cuts, none of which are favorable.

“Substantial reductions in funding to the library could result in fewer materials purchased and/or reduction in staff,” Wilde said. “A reduction in staff would likely mean fewer library programs and probably a reduction in hours. There would have to be a fee charged for those who live outside of city limits, as their taxes would no longer be paying for library services.”

Deadwood Library Director Patricia Brown said losing free services could be a huge blow to the county, as the population continues to grow.

“Our citizens have come to expect access to a county library system,” she said. “Ending those services now would be a step backwards. Our library services improve and increase when we work together to serve the entire county population. The county population continues to grow and many people moving to an area such as ours do not just appreciate library service, they expect it.”

County residents use the libraries regularly, according to all four directors. In Spearfish, Wilde reported that about 23% of their active library card holders reside outside of city limits in Lawrence County. In Lead and Deadwood, both libraries reported that more than one-third of their patrons are county residents. Though Whitewood Library Director Rea Weyrich did not give a specific number of county patrons, she said the library serves residents from all corners of Lawrence County.

“A nanny brought her Spearfish youngest charge to our story time on a regular basis,” Weyrich said. “The older siblings thought it quite a treat when they could visit when they had no school.”

Keeping library services free by receiving funding from the county is vital for people of all interests, ages, and socioeconomic backgrounds, Weyrich said, adding that in addition to providing Internet services and book circulation, her library serves as a meeting place for such organizations as the Artemis House, the Social Security Office, 4-H Clubs and leaders, the Whitewood Chamber of Commerce, the Alliance for Successful Aging, and many other governmental and civic programs.

“In a library what services or help you get does not depend on how much money you can spend, making libraries a real equal opportunity service,” she said. “It’s a place where if you need help, all you have to do is ask. Our community has no other free access to the Internet, an active youth center, or meeting space that the Whitewood Public Library provides.”

The number of foot traffic from residents and visitors every year also far exceeds circulation numbers. Wilde said in 2018 the Spearfish library had 115,923 people walk through their doors, and in 2019 that number dipped slightly to 114,622. That compares to active library cards at 7,813 and 7,193 respectively. In 2020, when library access was limited due to COVID-19, the Spearfish library saw 42,013 patrons for services, but only had 7,594 active library cards.

In Deadwood, Brown said the library serves 16,500 patrons for a variety of services every year, compared to its year to date 2021 material circulation of just over 4,000. In Lead, Library Director Sarah Shoop said they serve an average of 23,000 visitors a year, more than double its 2021 year to date circulation number of just over 11,000.

Shoop pointed out that one of the reasons for the increased foot traffic over circulation numbers is that as technology advances, free access to libraries becomes even more important. All four library directors said when it comes to services that are the most utilized at libraries across the county, computer and Wi-Fi access is a very close second to physical circulation.

“I know many people think that libraries aren’t as relevant in today’s world because we have access to information at our fingertips,” Shoop said. “However, as the world becomes more and more digital, libraries are in more demand instead of less. The things most people take for granted, smart phones, Internet and computers at home, are something that not everyone has. That is where libraries come in. We provide access to the digital content. We are the place where people can not only check out books, movies, and audiobooks, but also check email, conduct online banking, apply for jobs and more. We provide historical research resources, tech support and copying/faxing/scanning resources.”

Free computer and Wi-Fi access at the library became even more essential with the advent of the COVID-19 pandemic, Wilde said.

“People rely on libraries for a lot more than just entertainment, not to say that entertainment resources weren’t also important during a time when many things were shut down,” she said. “Plus, many people were facing uncertain or nonexistent employment so they needed free services more than ever. There were also many government assistance agencies that were shut down and had long wait times to receive help by phone, which made Internet access that much more important.”

While patrons can check out materials online, all four library directors said physical circulation is still the most popular way to use the library, as some people don’t even have computer access and rely on the library for that. In Lead, Shoop said the physical circulation for January through July 2021, even while the library still had curbside pickup during the first part of the year, is at 11,128. By comparison, online circulation during the same time period, for e-books and audiobooks, was at 2,248.

In Deadwood, Brown reported that with limited open hours during the COVID-19 pandemic, the library’s total circulation numbers to date in 2021 are at 4,293, with only 648 online.

In Spearfish, Wilde said statistics show a steady increase in both physical and online circulation, although it is clear that patrons still prefer to receive physical materials in the library. Though she did not give numbers for 2021, in 2018, physical circulation at the Grace Balloch Memorial Library was at 117,315, and by 2019 that number had grown to 118,638. That compares to a 24,079 online circulation in 2018 and a slight increase to 29,729 in 2019. Even amidst the COVID-19 pandemic, Wilde reported physical circulation numbers were still higher, with 78,249 in 2020 compared to online circulation of less than half, at 33,287.

Overall, Shoop said the value of libraries is priceless to the community, and she hopes patrons will express their support to members of the Lawrence County Commission, as commissioners make their funding decisions in the coming week. “I think a person would find it difficult to find one place other than a library that can offer all of these services and resources all in one place. Please speak up. If your local library has helped you in any way, shape or form, please contact the Lawrence County Commission. I know the commissioners have a tough job of deciding what happens with the budget. But unless people speak up, they have no way of knowing how vital libraries are in our communities.”

The Lawrence County Commission will hold a public hearing to receive input about its proposed budget on Sept. 7. The public is invited to attend and express their views about the library cuts, and any other items in the 2022 budget.