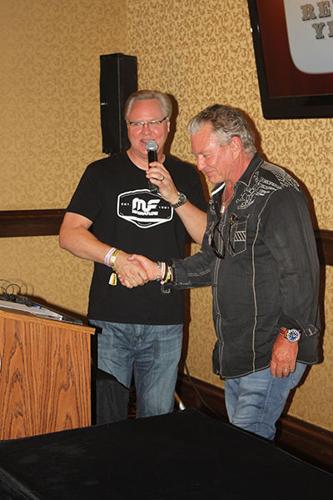 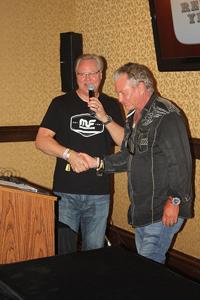 Actor Tom Berenger, right, stars in a new movie called “American Dresser” which is the story of a Vietnam veteran who rediscovers the country, and his self-awareness on a motorcycle. He was part of a Monday’s Legends Ride. Pioneer photo by Al Van Zee 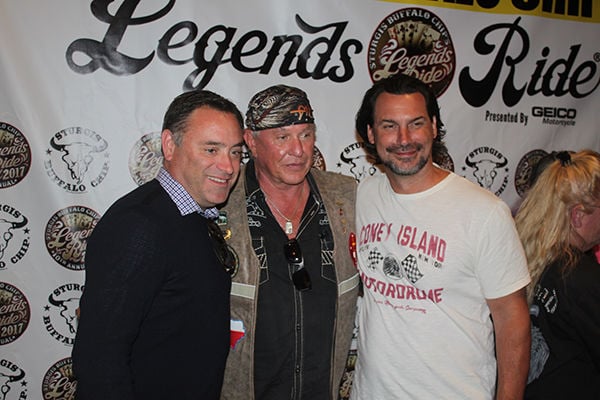 Actor Tom Berenger, right, stars in a new movie called “American Dresser” which is the story of a Vietnam veteran who rediscovers the country, and his self-awareness on a motorcycle. He was part of a Monday’s Legends Ride. Pioneer photo by Al Van Zee

DEADWOOD — Some of the main events of the Sturgis Rally begin outside of Sturgis. One of them is the Legends Ride, which started off from the Franklin Hotel in Deadwood.

The ride raises money for charity, and it’s the 10th anniversary of the start of the event. The bikers taking part in the Legends Ride have helped raise nearly $500,000 for charities such as the Sturgis Motorcycle Museum and Hall of Fame and the Black Hills Special Olympics.

“We need a gymnasium for these kids,” said Rod Woodruff, president of the Buffalo Chip, as he spoke of how the money from this year’s Legends Ride would be used.

Included in the list of legends taking part in the ride this year were three people involved with the new movie “American Dresser,” scheduled to be released this fall.

Actor Tom Berenger plays the main character in the movie and served as this year’s ride captain. In the movie, Berenger plays a Vietnam veteran who attempts escape his demons with a ride across the country.

Carmine Cangialosi is the writer, director, and actor in the movie. Ryan Johnson is the producer. Many of the scenes in the movies are shot in South Dakota, and many are shot at the Sturgis Rally.

After making repeated trips to several Rallies, Cangialosi said he had to re-write his script to reflect the reality of what he saw and experienced.

Berenger got to know Woodruff several years ago after getting into riding.

“He’s the Steve McQueen of Sturgis,” he said, referring to Woodruff. “He defines cool.”

“They worked really hard on this movie,” said Woodruff. “It’s not just about Sturgis. It’s about what it means for people’s lives.”

The movie may re-ignite an interest in motorcycle culture in the same way that movies such as “Easy Rider” did 50 years ago.

“Anything about motorcycles is good for South Dakota,” he said. “This is a Mecca for motorcycles.”

Movies about Sturgis are not common. But that may be what makes it unique, and what may make it a good movie.

“The key to success in Hollywood is to not to do what everyone else is doing.”

Sturgis is a place and an event like no other in the country, he explained.

“I had no concept of the size of this crowd,” he said.

All appeared at a press conference before the ride.

Along with those involved in the new movie, other participants in the Legends Ride included Josh Owens, from the Discovery Channel’s Moonshiners, freestyle motocross rider Carey Hart, and photographer Michael Lichter.

“We’ve had a great time,” said Hart. “It kinda gives me a purpose when I come here.”

Pat Simmons, one of the Grammy-Award-winning writers and musicians for the Doobie Brothers, also appeared at the pre-ride press conference but didn’t take part in the ride. He and he Doobie Brothers were getting ready for a concert at the Buffalo Chip Monday evening.

The ride began with a lunch at the Silverado Franklin Hotel followed by the auction of an S&S customized Harley-Davidson Dyna Low Rider motorcycle in front of the hotel.

Following the auction, the riders moved out for a self-guided, scenic ride through the Black Hills. Riders re-assembled at a riders-only reception at the Buffalo Chip amphitheater that included food and a concert by the Doobie Brothers on the Buffalo Chip main stage.