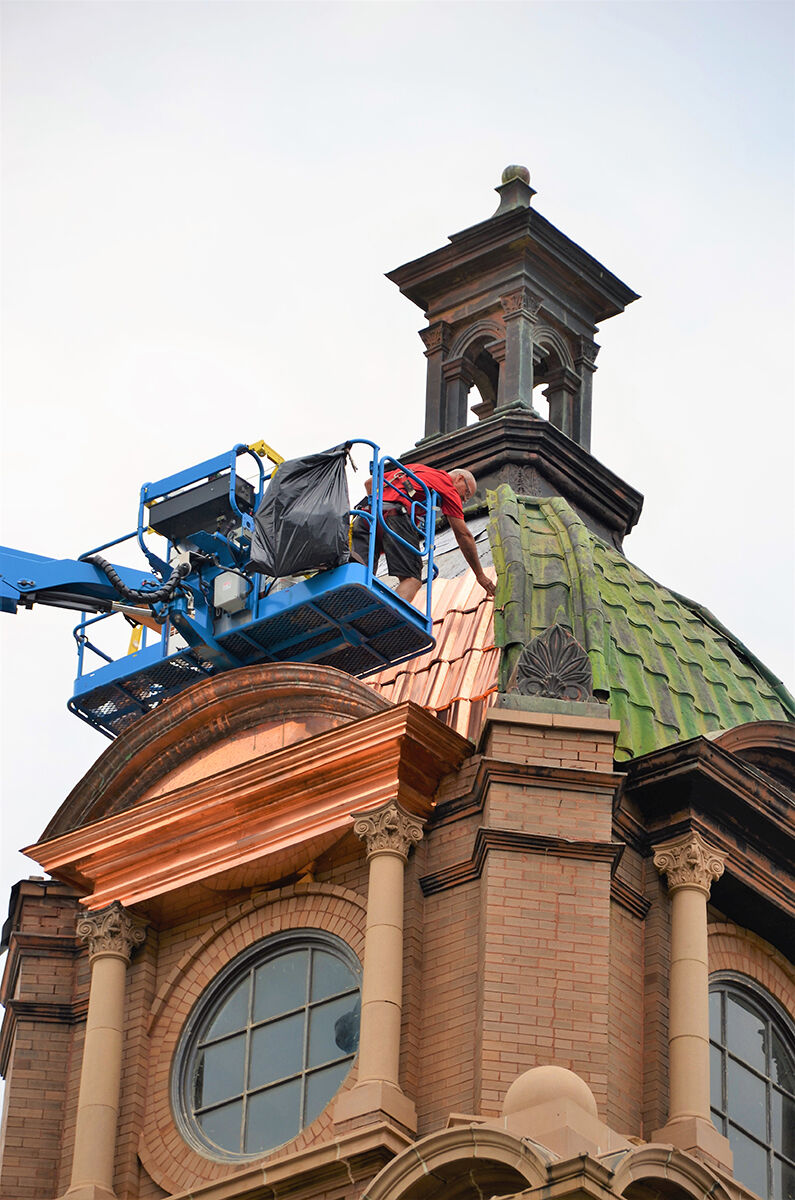 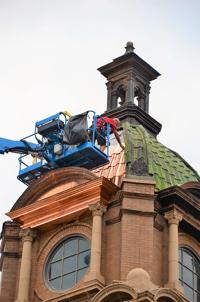 Sheet metal specialist Leroy Shumake is removing each copper tile on the Lawrence County Courthouse bell tower and roof, refabricating, and replacing it, a process that will take at least five more months. The original tiles were the golden color and patina to green when exposed to the elements. Pioneer photo by Jaci Conrad Pearson 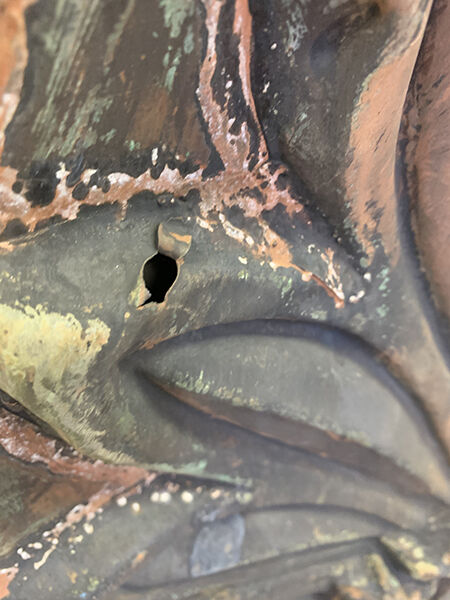 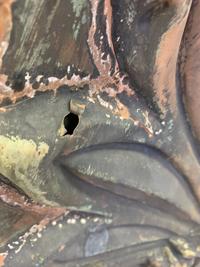 While working on the Lawrence County Courthouse roof, sheet metal specialist Leroy Shumake removed each of the gothic ornamental corners, discovering bullet holes in them, along with several .22 caliber slugs. Pioneer photo by Mark Watson

Sheet metal specialist Leroy Shumake is removing each copper tile on the Lawrence County Courthouse bell tower and roof, refabricating, and replacing it, a process that will take at least five more months. The original tiles were the golden color and patina to green when exposed to the elements. Pioneer photo by Jaci Conrad Pearson

While working on the Lawrence County Courthouse roof, sheet metal specialist Leroy Shumake removed each of the gothic ornamental corners, discovering bullet holes in them, along with several .22 caliber slugs. Pioneer photo by Mark Watson

DEADWOOD — The historic Lawrence County courthouse roof is slowly going from green to golden, as the arduous task of shoring up the roof and addressing compromised masonry is in full swing for at least the next few months.

The Lawrence County Commission awarded the project contract to Texas-based Precision Construction and Roofing for $1,616,552 in May.

The need for repairs on the courthouse was precipitated by a massive hailstorm Deadwood sustained in 2018 and water infiltration led to the masonry being an emergency.

The road to finding a contractor to complete the courthouse project has been a long one, as the skills required to work on a highly historic building are scarce.

The project is convoluted and includes replacing all of the copper work on the bell tower and the main roof, as well as refurbishing all of the masonry on the entire building, including tuckpointing.

Precision Construction and Roofing has subcontracted with Leroy Shumake of Legacy Metals, based out of Murfreesboro, Tenn., now in his 42nd year of doing sheet metal work.

“I served a four-year apprenticeship, and I have worked for different contractors in the Nashville, Tennessee area,” Shumake said. “I also took a seven-year stint and worked for a historical restoration contractor. Loved that. And in 2004, decided to do this by myself.”

In a word, where does Shumake’s expertise lie?

“Details,” he said. “I’m very visual. I’m left-handed, so I’ve got a little bit of artistic flair to it. Just like this job, everything’s hand-made.”

“Gorgeous. One of a kind. Because so many courthouses are unique in their own area,” Shumake said. “It’s so interesting how different architects built them according to the funds available. It shows a little bit of the different flair or finesse of the different areas.”

Shumake said the most unique aspect, in his mind, about the Lawrence County Courthouse is definitely the tile-shaped copper panels that he is working on.

“Most of the time if you see a tile-shaped southwest-type roof, it’s going to be tile,” Shumake said. “It’s going to be the real deal. And this was a hand-made copper tile panels. And each one of them is separate.”

It’s easy to see where Shumake’s work begins and ends, as shiny copper replaces the existing patinaed green tiles. How long to get back to green?

“Somewhere between 50 and 60 years,” he said. “When it gets to the patina green, all of the elements quit bothering it anymore. It’s oxidized. It’s set. It’ll last 300, 400 years. Unless a monster hailstorm comes and beats it to death.”

Prior to starting on the copper panels, Shumake discovered first-hand the Wild West spirit that Deadwood imbues on the gothic ornamental corners that adorn the bell tower.

“I’ve got five lead .22 caliber slugs laying on a little table here, where I took the next side off the other day,” Shumake said. “A couple of them were just laying underneath the metal, where they went through the wood or hit the brick behind it and ricocheted down and just laid there. It’s been laying there for years. I dug a couple of them out of the wood that went almost all the way through the wood and it was just sitting there. Tim (Agena) and I counted 13 on the front of the building, the Sherman Street side. And I counted 12 on the south side the other day when I started taking that side off.”

Asked if he had ever seen bullet holes in the historic structures he works on, Shumake hesitated.

“I haven’t seen as much,” he said. “But my goodness, how long? How long have they been there? There’s really no telling, because you really can’t see that from the ground.”

Shumake is in the process of removing 90% of the old copper and refabricating to the same detail and reinstalling it all. Some of it, he has found, he needs to leave in place because there is no wood structure behind it.

“The lantern up top, I’m leaving that in place,” Shumake said. “They asked me, ‘When are you taking that off?’ I said, ‘I’m not taking that off.’ I’m going to make new pieces and go up there and put them on. They said, ‘You can do that?’ I said, ‘Yes. I do that to steeples all the time. It’s what I do.’”

Shumake said he is hoping to finish up on the copper work in five months.

“I appreciate the city, the county commission, leaders, whoever had a hand in saying, ‘You know what? We want to preserve this,’” Shumake said. “And not just because I get to make some money on this job, but because so many times, the people today don’t realize what they’ve got. They have something of importance. It’s part of the history. And when we start destroying our history and pushing it away and covering it over, we lose so much value of where we’ve come from and what we’ve accomplished.”

Shumake is amazed that the county has retained the original blueprints of the courthouse and is thankful to have them for a reference as he works.

“They’re still up in the office. They’re actually blue,” he said. “They’re still there. I can’t tell you the number of churches or municipalities that I have had the pleasure of sitting down, talking with them, looking at them, and they don’t know where their plans are. They don’t have a clue how it was built. Nothing. They’re walking through the dark with blinders on, but y’all have your information. Your plans are here. It’s awesome. Hats off to somebody. That’s valuable information.”