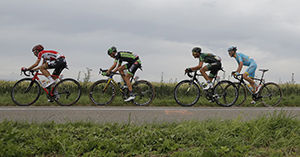 On South Dakota roadways with speed limits 35 miles an hour and slower, vehicles passing bicyclists are now required by law to give a three-foot buffer, and in zones with speed limits faster than 35 miles per hour, the buffer increases to at least six feet. AP file photo 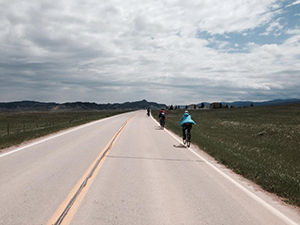 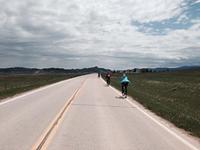 Bicyclists on roadways in South Dakota are required to follow all traffic laws because they are considered vehicles, and a new state law also specifies that motorized vehicles passing bicycles must give a three- to six-foot buffer, depending on the roadway speed limit. Courtesy photo

On South Dakota roadways with speed limits 35 miles an hour and slower, vehicles passing bicyclists are now required by law to give a three-foot buffer, and in zones with speed limits faster than 35 miles per hour, the buffer increases to at least six feet. AP file photo

Bicyclists on roadways in South Dakota are required to follow all traffic laws because they are considered vehicles, and a new state law also specifies that motorized vehicles passing bicycles must give a three- to six-foot buffer, depending on the roadway speed limit. Courtesy photo

SOUTH DAKOTA — South Dakota is now one of the 26 states with a law on the books to specify how much of a buffer is required when passing a bicyclist on the road.

“The new law really just kind of gives both operators a sense of responsibility when a bicycle and a motor vehicle are operating in the same area,” Spearfish Police Chief Pat Rotert said, adding that both operators need to be cognizant that they’re sharing the roadway and the safety obligations that come with that common ground.

South Dakota Codified Law 32-26-26.1 went into effect July 1 after House Bill 1030 unanimously passed by both the House and Senate in the 2015 Legislative session. The law outlines the minimum buffer a driver must provide when overtaking and passing a bicycle: if the posted speed limit is 35 mph or less, a driver must allow a minimum of a three-foot separation “between the right side of the driver's vehicle, including any mirror or other projection, and the left side of the bicycle,” or a minimum of six feet if the posted limit is greater than 35 mph. It also allows the motor vehicle to partially cross the centerline/dividing line between two lanes of travel in the same direction “if it can be performed safely. The driver of the motor vehicle shall maintain that separation until safely past the overtaken bicycle.” A violation of the law is a Class 2 misdemeanor.

John Williams, co-founder of the Spearfish Bicycle Cooperative, said that the law primarily serves as a public safety message to remind people that there needs to be a relationship between drivers and bicyclists on the road.

He’s personally been yelled at and had expletives shouted at him about “getting off the road” when riding his bicycle, and he hopes the new law would remind drivers that bicyclists do have the option to ride there — and it is often the safest place to be, as drivers are more attuned to watching for traffic on the roadway than on sidewalks. For example, a driver making a left turn into a parking lot, for will be checking for oncoming traffic before making a turn, but a bicyclist coming from the opposite direction on the sidewalk that crosses the driveway to the parking lot may not be visible until the vehicle is already making the turn. South Dakota does not require bicyclists to use a traffic lane; they may choose to use the roadway or sidewalk if the municipality allows for sidewalk riding, but state law does require that bicycles entering crosswalks or roadways from the sidewalk must stop before entering the crosswalk/roadway, and must yield the right-of-way to any pedestrian on the sidewalk, as well as give an audible signal before overtaking/passing a pedestrian.

Having bicyclists and drivers on the roadway means that everyone is following the same rules of the road and can anticipate what the other vehicle operators should be doing.

“It’s important to follow the rules of the road,” Williams said.

He and Rotert stressed to both drivers and bicyclists that road safety is a two-way street: everyone is responsible to know the laws. That means drivers and bicyclists must stop at stop signs and follow traffic signals; be on the right side of the road traveling in the direction of traffic; overtake/pass vehicles on the left; and use blinkers or hand signals to show when slowing and turning.

“If the bicycle operators follow the rules of the road and the vehicle operators follow the rules of the road, this statute is going to be fairly rarely used,” Rotert said. He described that drivers make these considerations when overtaking other motorized vehicles on the road, and when a bicycle is on the roadway, it is considered a vehicle, so the same consideration must apply.

And because bicycles cannot always go as fast as a motorized vehicle, there will be times when motorists must slow down to safely pass a bicyclist. This often occurs on popular routes for riders that include places like Spearfish Canyon.

“Everyone can agree it is worth taking your foot off the gas pedal, slowing down for a few seconds to safely pass a bicyclist. Whether it be a bicyclist, or a farm tractor, or whatever, it’s important that you slow down and safely pass and not try to gun it …” Williams said, pointing out the statistics. According to the U.S. Department of Transportation National Highway Traffic Administration, there were 726 bicyclists killed and 49,000 injured in motor vehicle crashes in 2012.

Williams hopes that the law creates more awareness for drivers that cyclists are on the road, and that communities continue to move in directions to make themselves more bicycle-friendly. Nationwide, more people are taking non-motorized vehicles to the road. According to the U.S. Census Bureau, from 2000 to 2012, the number of Americans traveling to work by bicycle increased from approximately 488,000 to 786,000.

In the Black Hills, on any nice day, bicyclists of all ages can be seen out enjoying a ride for enjoyment or transportation, Williams said, and he doesn’t anticipate the numbers of people bicycling would decrease anytime soon.

Rotert said that according to Spearfish’s city code, a bicycle on the roadway is considered a vehicle, which means that everything code enforcement-wise that applies to a vehicle applies to a bicycle. He thinks the new law is a good piece of legislation and puts language to the common sense most motorists have been applying for years.

“The vast majority of vehicles coming upon a bicyclist move left because that’s the safe thing to do,” he said.

Williams added that he hopes the law would keep things moving in the direction of  “a nice symbiotic relationship” between bicyclist and motorists.

South Dakota Codified Laws to know when riding a bicycle:

Operation on a sidewalk or crosswalk:

• 32-20B-2. Rights of bicyclist — Duty to stop. A person operating a bicycle upon and along a sidewalk, or across a roadway upon and along a crosswalk, shall have all the rights and duties applicable to a pedestrian under the same circumstances, except as provided in 32-20B-3, and except that bicyclists must stop before entering a crosswalk or highway from a sidewalk or sidewalk area.

• 32-20B-4. Parking on sidewalk —Violation as petty offense. A person may park a bicycle on a sidewalk unless prohibited or restricted by an official traffic control device or ordinance. The parked bicycle may not impede the normal and reasonable movement of pedestrian or other traffic. A violation of this section is a petty offense.

Operation on a roadway:

• 32-20B-5. Riding close to right-hand curb required — Violation as misdemeanor. Any person operating a bicycle upon a roadway at less than the normal speed of traffic at the time and place and under the conditions then existing shall ride as close as practicable to the right-hand curb or edge of the roadway. However, a person operating a bicycle may move from the right-hand curb or edge of the roadway to overtake and pass another bicycle or vehicle proceeding in the same direction, to prepare for a left turn at an intersection or into a private road or roadway or to avoid conditions including, but not limited to, fixed or moving objects, parked or moving vehicles, bicycles, pedestrians, animals, surface hazards, or substandard width lanes that make it unsafe to continue along the right-hand curb or edge. For purposes of this section, a “substandard width lane” is a lane that is too narrow for a bicycle and vehicle to travel safely side by side within the lane. A violation of this section is a Class 2 misdemeanor.

• 32-20B-6. Turning, stopping, starting, slowing — Signals and lookout — Overtaking on the right — Violation as misdemeanor. A person operating a bicycle shall give a continuous signal of intention to turn right or left during the last one hundred feet traveled by the bicycle before turning. The signal shall also be given while the bicycle is stopped waiting to turn. A signal by hand and arm need only be given intermittently if the hand is needed in the control operation of the bicycle. No driver of a bicycle may overtake another vehicle on the right if the overtaken vehicle is signaling to make a right turn. Except as provided in this section, a person operating a bicycle shall comply with the provisions of 32-26-22 and 32-26-22.1. A violation of this section is a Class 2 misdemeanor.

• 32-17-25. Bicycle lamps — Visibility and color — Violation as petty offense. Every bicycle shall be equipped with a lighted lamp on the front thereof visible under normal atmospheric conditions from a distance of at least three hundred feet in front of such bicycle and shall also be equipped with a reflex mirror or lamp on the rear exhibiting a yellow or red light visible under like conditions from a distance of at least two hundred feet to the rear of such bicycle. A violation of this section is a petty offense.

Municipalities have specific ordinances relating to the operation of bicycles within their city limits, as well, and bicyclists are encouraged to know and follow these rules.