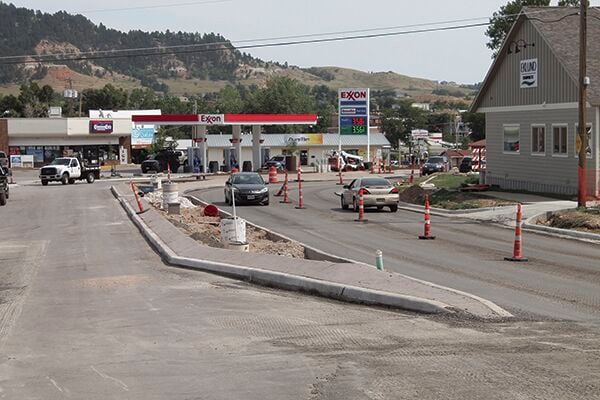 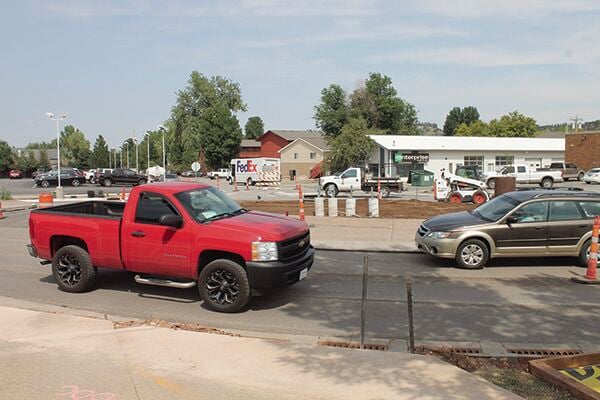 The much-anticipated roundabout at the intersection of Jackson Boulevard and Ames Street is currently functioning as a two-lane thoroughfare while crews work to complete asphalt overlays on the north and south sides of the road. Pioneer photo by Alex Portal

The much-anticipated roundabout at the intersection of Jackson Boulevard and Ames Street is currently functioning as a two-lane thoroughfare while crews work to complete asphalt overlays on the north and south sides of the road. Pioneer photo by Alex Portal

SPEARFISH — Now, well underway in Phase 2, the Jackson Boulevard construction project is nearing a substantial completion milestone with much of the work from Exit 12 to 3rd Street all but wrapped up.

“The east end of the Jackson Phase 2 Project is nearly complete. All that remains is street lighting and finishing the landscaping,” said Assistant Public Works Director Adam McMahon, in a prepared statement to the Pioneer. “The reason for the incomplete or missing streetlights throughout the project is that faulty streetlights were delivered to the project and the manufacturer is working to manufacture and deliver replacements.”

McMahon said that all underground utility lines all been have been installed as well as the curb and gutter, and milling on the west end of the project from 3rd Street to University Street.

“Primarily after this week it’s going to be just finishing up sidewalks, cleaning up and a lot of landscaping that’s still left from the (Jackson Boulevard) bridge, west to University (Street). And then obviously a heck of a lot of striping that will go on too for the roadway and the roundabout,” said Spearfish City Engineer Kyle Mathis.

But probably the most telling sign that the nearly half a decade-long project is coming to fruition is the roundabout taking shape at the intersection of Jackson Boulevard and Ames Street.

“It was an oddball intersection before, traffic signals that were in there were not compliant, they were not placed properly and it’ll be a better flowing intersection and roundabouts tend to be safer than standard traffic signal intersection too,” Mathis explained. “It’s fairly simple, and I think (people) will get used to it fairly quickly.”

Mathis said the concrete sections comprising the roundabout had been placed for a few weeks now, with the work crews taking great care not to interfere too much with the business and private residence accesses. When all is said and done, Mathis said Jackson Boulevard will transmission from a two-lane road headed in either direction to a one-lane road at 3rd Street and University Street. The roundabout will also be one lane.

A four-ton-20-foot-tall stainless steel “Hive Sculpture,” designed by artist Dale Lamphere as well as a sign for Black Hills State University are scheduled to be installed in the center of the roundabout on Sept. 7 and 9, respectively, McMahon said.

“It’s been a long haul, it’s been a very long project, but it’s starting to really take shape and I believe we’re going to have a really nice street there when we get all done,” Mathis said.