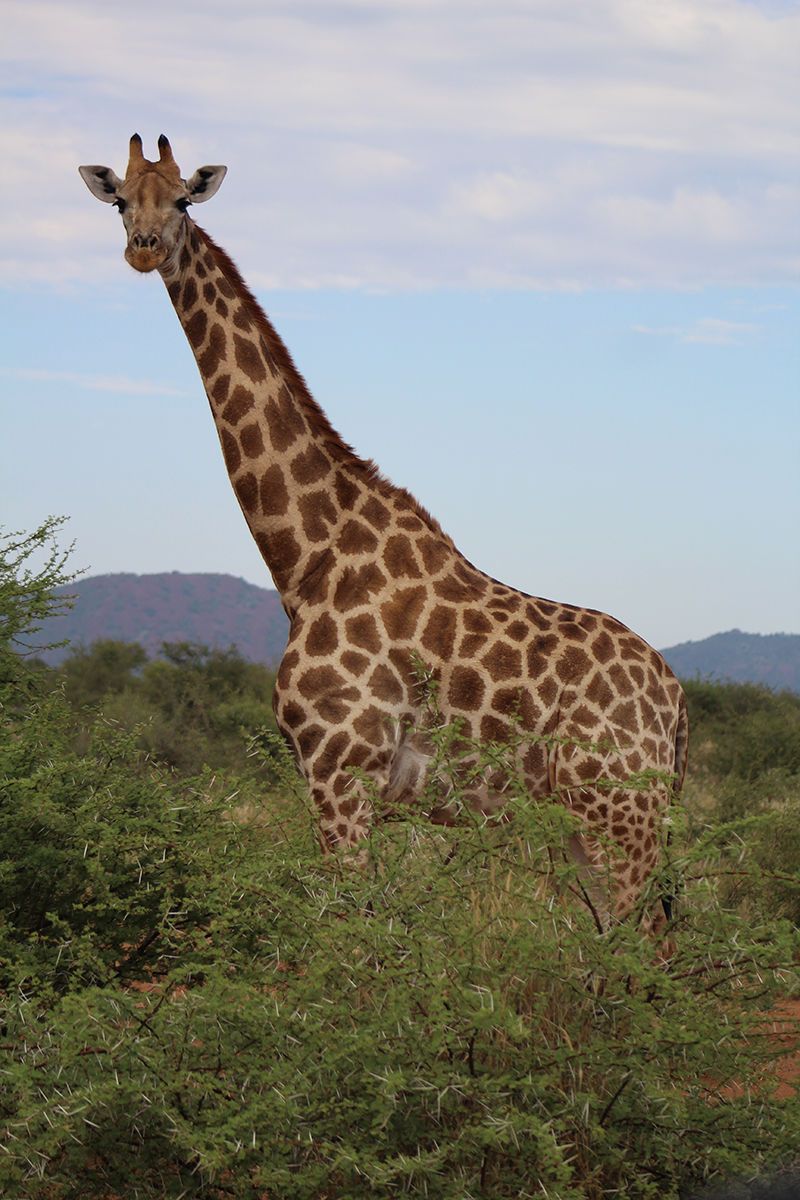 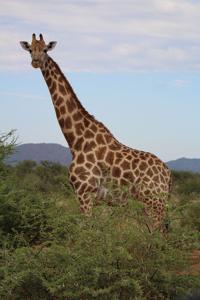 A giraffe at the Madikwe Game Reserve, which encompasses nearly 185,000 acres along the northern border of South Africa is pictured. Black Hills State University students recently participated in a service-learning trip to Africa. Photo courtesy of Chris Lister 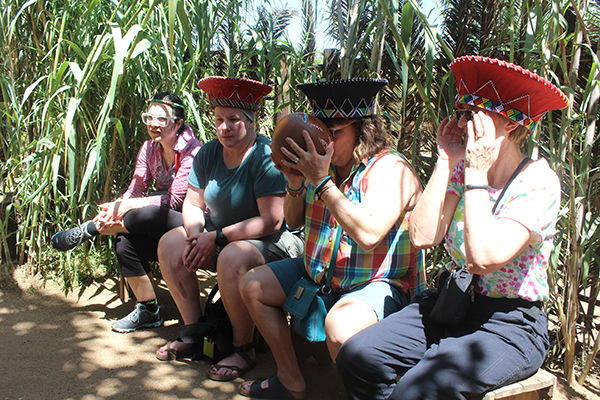 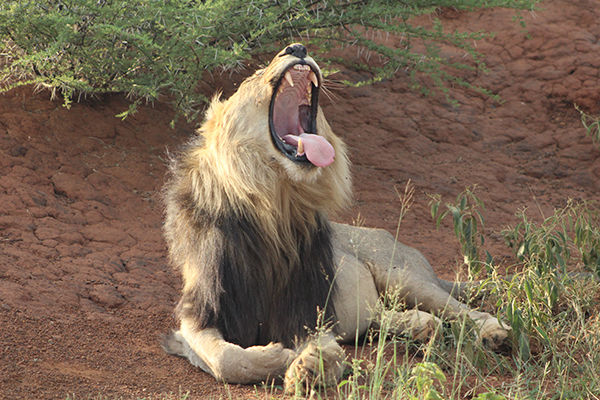 BHSU students received a close look at animals while in the Madikwe Game Reserve. Photo by Chris Lister 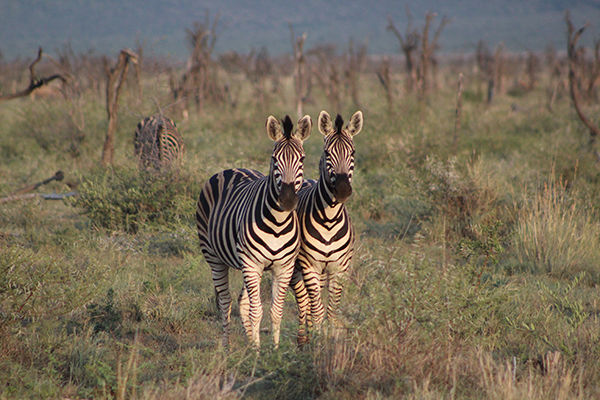 Zebras are pictured at the Madikwe Game Reserve. Photo by Chris Lister 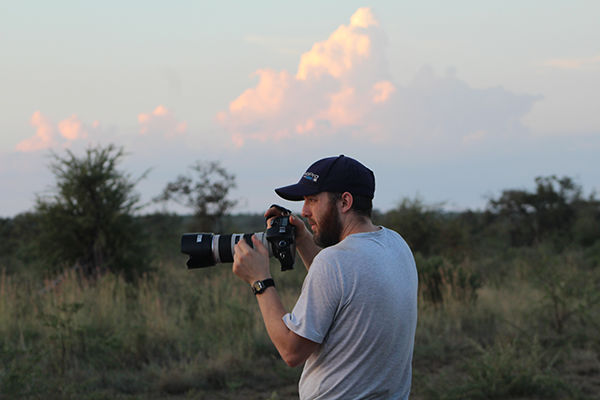 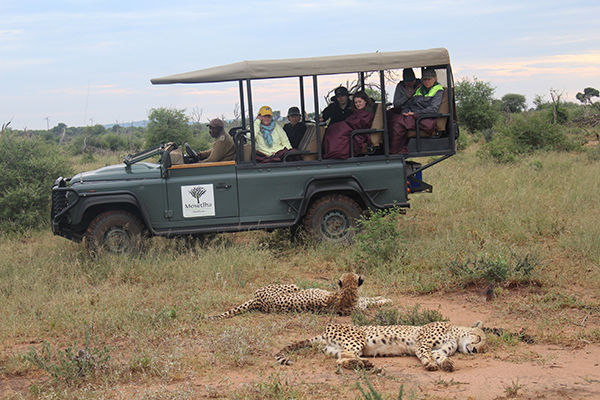 Little was between students and wildlife on the trip. Photo by Chris Lister 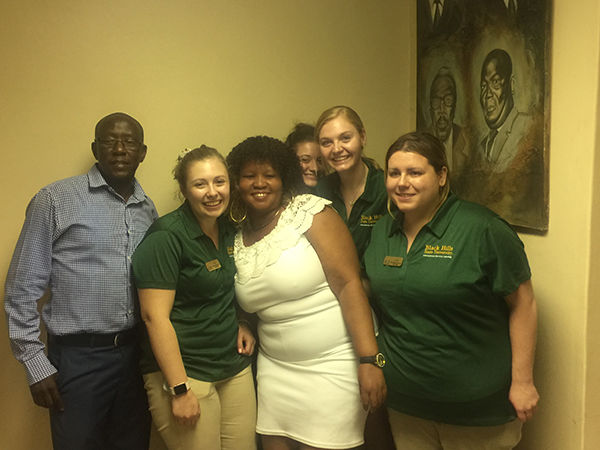 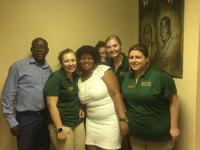 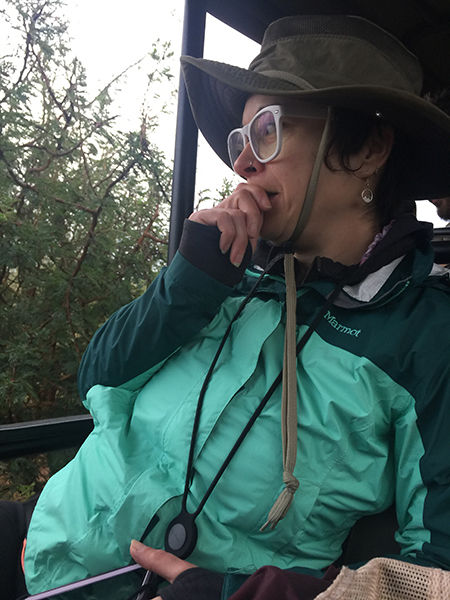 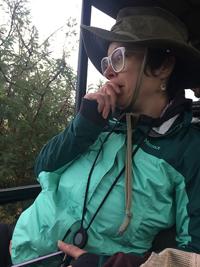 BHSU professor Gina Gibson was a little intimidated by lions so close. Photo by Chris Lister

A giraffe at the Madikwe Game Reserve, which encompasses nearly 185,000 acres along the northern border of South Africa is pictured. Black Hills State University students recently participated in a service-learning trip to Africa. Photo courtesy of Chris Lister

BHSU students received a close look at animals while in the Madikwe Game Reserve. Photo by Chris Lister

Zebras are pictured at the Madikwe Game Reserve. Photo by Chris Lister

Little was between students and wildlife on the trip. Photo by Chris Lister

BHSU professor Gina Gibson was a little intimidated by lions so close. Photo by Chris Lister

SPEARFISH — This spring, 13 Black Hills State University students and staff members traveled to South Africa and Botswana to participate in an international service-learning program — teaching at a high school.

The program is a three-credit course offered by BHSU. Students begin meeting in classes to plan their trip. Faculty members traveled to Africa before the students to identify the needs of African students. They brought back that information, and BHSU students were

required to formulate a curriculum to teach the African students in Gaborone, Botswana that would benefit both the high school and BHSU students.

“We got to know the students on a more personal level even though it was for a short amount of time,” said Allysa Burggraf, a sophomore majoring in elementary and special education at BHSU. “We started teaching the curriculum and we gave a lot of time for questions and answers.”

Burggraf said much of the curriculum was based around good decisions, healthy relationships, drugs and alcohol abuse, anti-bullying, and more.

Burggraf said they also taught the high school students about the power of education.

She said the Africans took those lessons and then in turn taught the rest of their classmates.

Dr. Lois Flagstad, vice president for enrollment and student affairs, said this is the third year that BHSU has participated in the program. The local students travel to Africa in the spring, and Sudlon, Philippines, in the fall.

In that short amount of time, Flagstad said, the educational scores of the high school students have improved markedly.

“Last year, every single person in their graduating class went on to the university,” Flagstad said of the small mountain school in Sudlon. “One of the factors that they attribute to that is our involvement at their school.”

A similar story is also found at the Botswana school.

“They, for years, have struggled to have passing test scores for their student body,” she said. “Three years ago they were ranked No. 15 in their school district. They have now moved up to the seventh position. … I asked their ministry of education rep, ‘Why is that,’ And he said, ‘Because you keep coming back.’”

The Africans peppered the BHSU students with questions dealing with the teachings. But they also fired question after question of a humorous nature, such as, “How often do you see Kim Kardashian?”

They’d ask about elections, pop culture, other things they heard on the news, and those of a more personal nature, Burggraf said.

“They get to the point where they ask, ‘Are you sexually active?’ ‘do you sleep with your boyfriend before you’re married? It gets personal, said Dr. Jane Klug, dean of students at BHSU.

“We talk about sex to our students in both (service-learning sites),” Burggraf said. “But when we are in the Philippines, when I brought it up, the topic got shot down immediately. The students were not open about talking about it.”

She said she believes this was due to the heavily Catholic influence in the Philippines.

However, in Africa, the students were asking questions about sexual relationships before it was brought up in the curriculum.

Flagstad said this may have been due to the regional focus on HIV/AIDS prevention.

She said that the government in Botswana has made the topic a priority and that condoms are available in many places – gas stations, grocery stores, and even museums. And in many places, they are free.

According to UNAIDS, an organization leading the global effort to end AIDS as a public health threat, nearly 23 percent of adults, 15 to 49 years old, have HIV in Botswana.

“When we talk about sex in our curriculum, it’s really about respect and healthy relationships, domestic violence and abuse,” Klug said.

Burggraf said they students were asked to write questions on a piece of paper and hand them in so they were not singled out.

“It’s a great opportunity for them to come into school, too, and ask these questions where they may not be able to ask their parents at home or might be embarrassed to,” Burggraf said.

The African students spoke fluent English as well as the language of their various tribes.

During the trip students of both locations learned more about each other. Where some BHSU students were under the initial impression that the African students would perhaps live in huts rather than the actual city they called home, the high schoolers thought of American farming practices as hand-harvesting individual plants rather than running massive combines in large fields.

The BHSU students also received a shock in the temperature change they experienced. It was -13F the morning they left Spearfish, and when they arrived in Africa, it was more than 100º F.

The students visited a childcare facility that the BHSU group informally adopted three years ago. Klug said the provider makes very little money, so the students have raised funds for him over the years. With that money he has purchased indoor plumbing and a generator. Most recently, he purchased a floor for the facility.

They also went on a short safari, spending two nights at an eco-friendly lodge in the Madikwe Game Reserve.

Located in South Africa, the reserve is approximately 185,329 acres or 290 square miles. Running water and electricity were not available.

Students slept in beds inside a hut with one solid wall at the back, but the remainder of walls were just partially built, allowing the air to circulate throughout.

Mosquitoes were not an issue, as it was not the rainy season; however, other wildlife kept the students awake at times.

The camp was fenced, but the front gate was wide open, save a top strand of wire preventing elephants from entering. However, cape buffalo, lions, hyenas and other creatures of the Dark Continent often entered the camp, roaming only feet away from the huts.

In the morning and evenings, the students would be guided outside the camp in open-top vehicles. Guides showed them elephants, giraffes, rhinos, impalas, leopards, and a slew of other species.

Finally, on the last night of the trip, the BHSU students went out to eat at a traditional African restaurant. There they sampled local cuisine including ostrich, crocodile, and even fried grubs.

It was also at the restaurant that they met one waiter who was a high school student at the school in Gaborone when BHSU first made the partnership with the school in 2016.

Another waiter the students met was in the process of applying to BHSU.

“They are amazed about how we live just as we are amazed by how they live. It truly is a cultural exchange,” Klug said. “It is not us as ‘missionaries,’ or we are the ‘educational gurus’ there to give them our knowledge. We get just as much as we give.”

BHSU President Dr. Tom Jackson, Jr., said international trips like the ones to Botswana and the Philippines are becoming a norm at universities throughout the country.

“Over the last two decades, clearly, times have changed on university campuses,” Jackson said. “Students, because of their online prowess, have become more global. It is not uncommon for a student to be playing online games with an individual in another state but also another country.”

And that global connection goes far beyond online gaming.

“We know our students have to have global competencies when they are graduating into a world where the workplace is very intertwined globally. … The interconnectedness between industries isn’t limited between those in the United States or just South Dakota but can go across multiple countries as well,” Jackson said.

Jackson said he directed the implementation of the program when he first arrived at BHSU. He was familiar with a similar program from a different university, and said it was very successful.

In addition to trips to the Philippines and Botswana, the BHSU choir performed throughout Europe, and business students have gone to Germany in recent years.