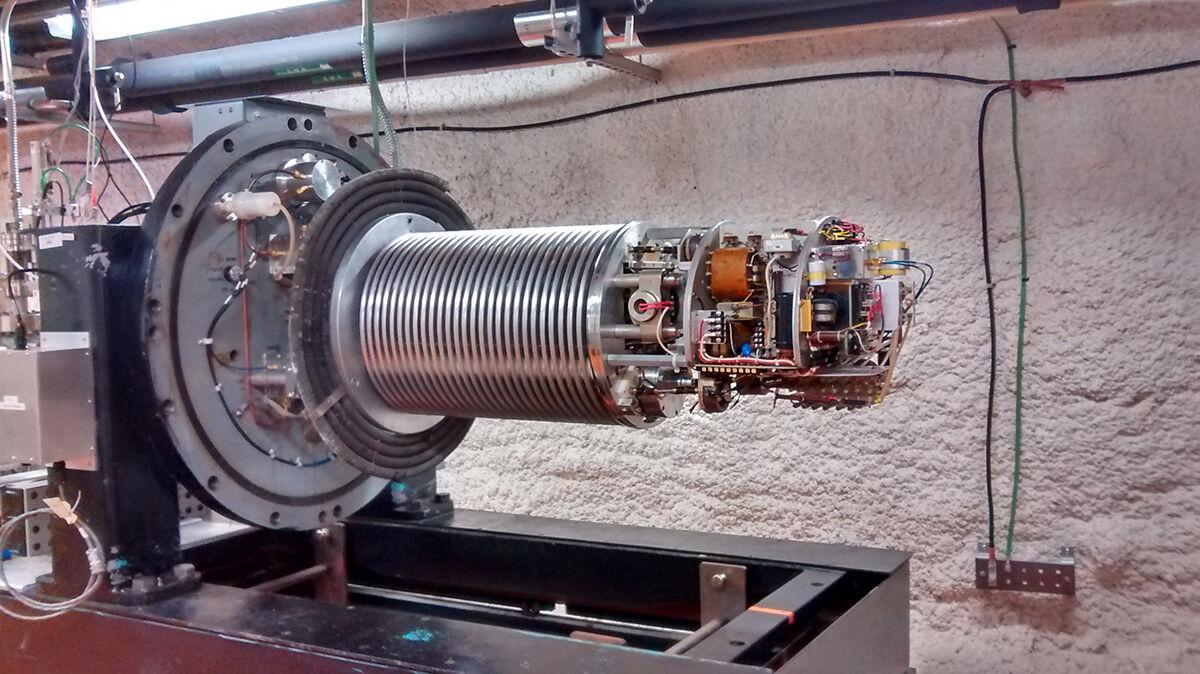 The CASPAR particle accelerator at Sanford Lab smashes particles into each other to study the effects and better understand how those reactions create the basic building blocks of life in the universe. Courtesy photo 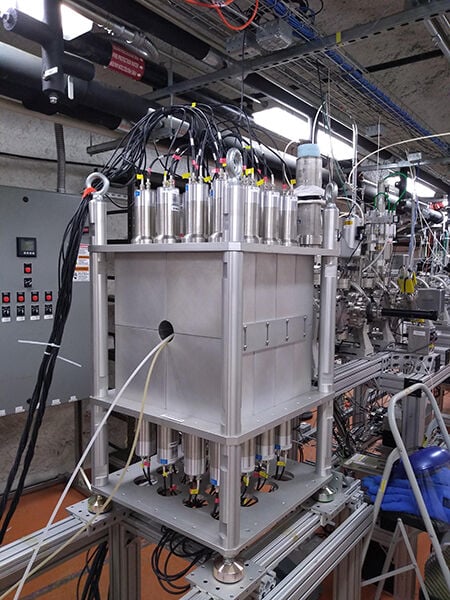 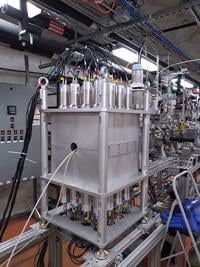 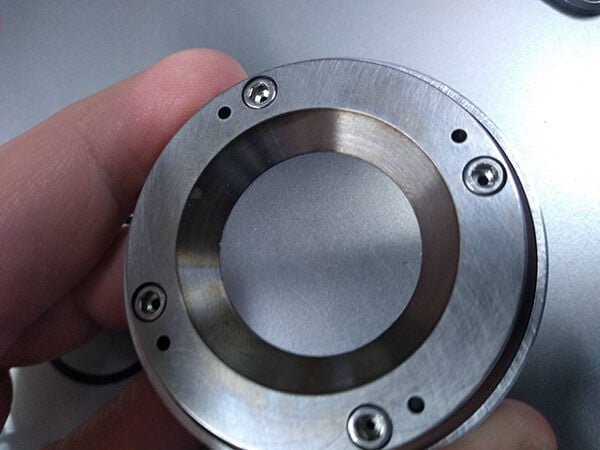 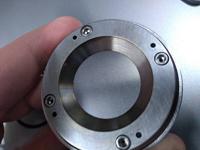 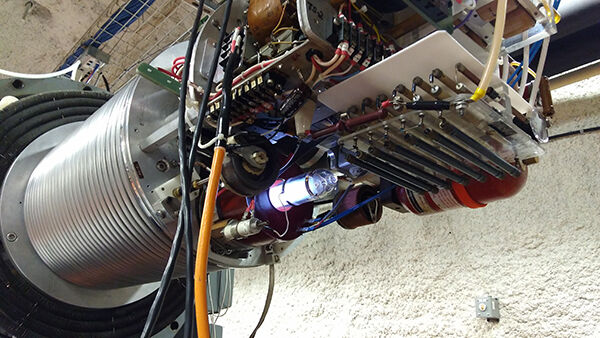 Plasma is glowing as the accelerator smashes particles. Courtesy photo

The CASPAR particle accelerator at Sanford Lab smashes particles into each other to study the effects and better understand how those reactions create the basic building blocks of life in the universe. Courtesy photo

Plasma is glowing as the accelerator smashes particles. Courtesy photo

LEAD — Most people are aware of the Large Hadron Collider in CERN Switzerland, the approximately 17-mile long particle accelerator has been a boon to scientific discovery and innovation since it came online in 2008. Some may be surprised to discover, however, that Sanford Lab also houses its own particle accelerator called CASPAR (Compact Accelerator System for Performing Astrophysical Research).

“To really get CASPAR’s mission, we have to go back a little bit, to the beginning of the universe,” said Mark Hanhardt, an experiment support scientist at SURF and Ph.D. candidate working with CASPAR.

Hanhardt explained that it took approximately 380,000 years after the Big Bang for the universe to expand enough for particles to slow down and settle into the first atoms. Once that occurred, things started to get interesting. Among the first atoms to be created was hydrogen.

“When a hydrogen atom hits another hydrogen atom head on with enough energy, it undergoes a fusion and starts a process that results in the creation of helium,” he said.

That process is called stellar nucleosynthesis and generates a great deal of light and energy, which we call stars. In stars much larger that our sun, that process continues; creating heavier and heavier elements that appear on the periodic table until it reaches iron.

“Basically when you hit iron you hit this nuclear wall because as soon as you hit iron, running atoms into each other to make bigger atoms doesn’t actually release energy it absorbs energy and you can’t do that long before your star collapses,” Hanhardt explained. “But that still leaves 80 or 90 elements unaccounted for, and those are elements that are necessary for creating, like, Earth.”

When a dying heavy star collapses, it’s known as a super nova. Hanhardt said that at the precise moment a super nova occurs about half of the mystery elements can be formed due to the extreme amount of energy produced by the event. That process is called rapid neutron process (r-process).

“Where we’re standing right here on the Earth – the atoms in our very body came from the core of a dying star,” he said.

The slow neutron capture process (s-process) is a relatively passive way for elements to form wherein atoms inside less energetic stars absorb passing neutrons and slowly build up to heavier elements. That process is one of the things CASPAR is trying to recreate and study.

“There’s all these interesting processes that happen along the way that you have to track in order to understand how we end up in a universe like we do,” Hanhardt said.

In order to do that, CASPAR creates a controlled environment for particles to smash into one another.

“It’s really a fancy toy that smashes things into other things,” Hanhardt said. “It really doesn’t get much more complicated than that. The way we achieve that, however, is a complicated procedure.”

CASPAR generates an electrostatic field, much like a Van de Graaff generator you might have seen where you place your hand on an orb and your hair stands up. Hanhardt said CASPAR’s electrostatic field is around 10X stronger than that.

“We’re generating this electrostatic field, so your hair would stand up, we put a positively charged particle next to it and it just shoots it away. We have all these magnets that keep it in the beam line, but that’s pretty much it,” he said.

The particle is sent careening down a 50-foot tunnel, at the end of which it runs into a metal foil where it hopefully smashes into the other particle the team is looking to study. A detector called the HECTOR detector then logs the nuclear reaction caused by the interaction.

Hanhardt said this type of research is often called blue sky research, which is a fundamental avenue of scientific study that seeks to better understand the universe for the sake of adding to the collective knowledge of mankind without an immediate application of the knowledge gained.

“Blue sky research into stuff that no one thought mattered is exactly how we ended up with electricity; its how we ended up with the internet. The foundation of everything that makes our every day nice is the result of blue sky research,” he said. “To suggest that that’s not worth funding is to suggest that society should stop moving forward. This is the foundation of what will be possible tomorrow.”

Hanhardt said it’s not the flashiest field of physics a scientist can enter, especially considering all the more popularized ideas being researched by experiments like the Deep underground Neutrino Experiment and LUX-Zeplin.

“If they find what they’re looking for, it’s headlines and Nobel prizes. It’s a giant leap forward and we have to change physics books,” he said. “CASPAR is the other 99% of science that is steady progress; we know exactly what we’re looking for, we just need to map it out and deepen our understanding of it.”

Although not nearly as high profile, CASPAR is a notable research achievement as it deals with some element-building processes that up until now have never been directly observable.

“For the bulk of the experiments that we’re running we’re the first experiment in history that’s able to get to low enough energy to actually recreate what’s happening inside of stars,” he said

Because CASPAR is such a relatively small particle accelerator, it is able to create and document interactions as they occur at very low energy levels. Imagine roasting a chicken at either a high temperature for a short period of time, or a low temperature for a longer period. Either way the chicken gets cooked, but the end result can be drastically altered.

“We’re trying to recreate the heart of a star which, it’s not going to sound like it, but is pretty low-energy as far as the universe is concerned,” Hanhardt said. “We’ve intentionally gone to the lowest energy we possibly can with our accelerator.”

Noted astronomer Carl Sagan famously said, “The nitrogen in our DNA, the calcium in our teeth, the iron in our blood, the carbon in our apple pies were made in the interiors of collapsing stars. We are made of starstuff,” referring to the origins of the cosmic particles that comprise everything we see and are. Although not the “sexiest” form of physics, the work being done by CASPAR at Sanford Lab is helping to provide scientists with a better understanding of how that “starstuff” works and comes together to allow more interesting configurations like those that result in life throughout the universe. Science can appear very cold and calculating to we laypeople, but sometimes, when you slow things down just enough and really start to take a look at the building blocks of the universe like CASPAR is doing you can find a commonality that brings a sort of peaceful hope and reassurance to the universe.

As Hanhardt puts it - “Unimagined, there’s an actual connection between you and me, me and the Earth, and me and everyone who’s ever lived and will ever live and the chance to track that back, the chance to actually answer the question, ‘where did we come from and where are we going,’ it’s absolutely fascinating to me.”