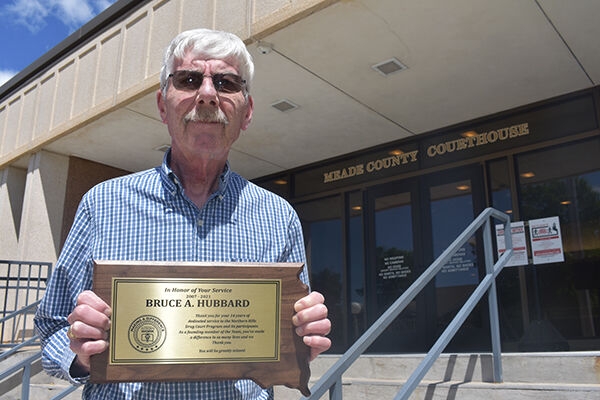 Bruce Hubbard has retired after 14 years serving as defense attorney for the Northern Hills Drug Court. He was honored with a plaque at the graduation ceremony on June 1. 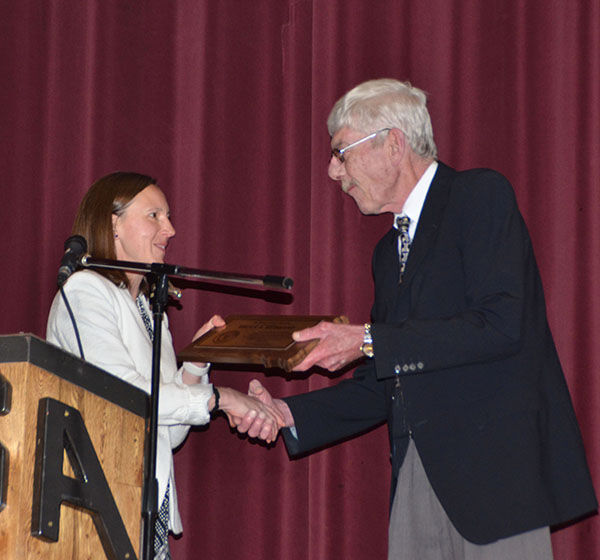 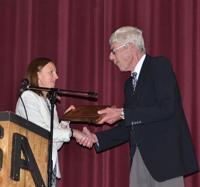 Bruce Hubbard has retired after 14 years serving as defense attorney for the Northern Hills Drug Court. He was honored with a plaque at the graduation ceremony on June 1.

STURGIS — For more than 14 years, Bruce Hubbard has been a cheerleader for drug addicts facing prison time in hopes of helping them turn their lives around.

Hubbard retired June 1, after serving as defense attorney for the Northern Hills Drug Court since its inception.

“As defense attorney, I wasn’t really a mentor. I was more of a cheerleader. If you have a group of people that they understand that you really care about them, I think it really helps,” Hubbard said.

Hubbard saw his job on the Drug Court team to give advice and recommendations to the judge based on his experience as a defense attorney. He also ensured due-process for the clients in the program.

Hubbard said there have been many success stories in those 15 years. One that stands out is a woman from Belle Fourche who was addicted to meth, and suffered from mental health problems including agoraphobia.

“She basically just stayed in her house and did drugs,” Hubbard said.

She enrolled in the Drug Court program including treatment with a mental health provider who encouraged her to get out of her house at least once a day.

“She followed that advice and kept extending the time she spent out of the house,” he said.

Participants in the program also are encouraged to get their GED, which this woman did once she gained the strength to break the bonds of her addiction and affliction.

“She ended up getting her GED and is now a totally different person than I had met on the first day,” Hubbard said.

Another success story from Hubbard’s time with Drug Court is that  there have been 23 drug-free babies born to moms in the program.

The idea for the Northern Hills Drug Court came from then Fourth Circuit Judge Jerome Echrich in 2005.

Hubbard said he was speaking with Echrich and expressed his frustration to him about how, as a defense attorney, he would negotiate a plea agreement for a drug-addicted client and then two or three months later that client would be back in court because of violations of their probation.

Echrich then shared with Hubbard that he would like to start a Drug Court in the Northern Hills.

“I had never heard of a Drug Court. I had no idea what it was,” Hubbard said.

Echrich floated the idea with the sheriff, Meade County State’s Attorney and others. In June of 2005, Echrich sent a letter to those who had expressed interest.

Echrich was brutally honest saying the program really didn’t have any startup funds and those involved weren’t sure where to begin, but he was ready to talk about it.

“We opened the doors to the program on the first of July in 2007. It was a two-year process to get everything together,” Hubbard said.

The first known drug court in the country was in Miami, Fla. The prosecuting attorney in that program was Janet Reno. Reno later served as  the Attorney General of the United States from 1993 until 2001.

Hubbard said he was sold on the program after those who enrolled wouldn’t end up back in court after two or three months.

Often times those clients would receive probation with the understanding that they enroll in a 30-day drug treatment program. That process was not working, Hubbard said.

When someone is addicted to meth, the drug can re-wire someone’s brain. Once a person begins to wean themselves from the drug, the brain has to re-wire itself again, Hubbard said.

The Drug Court serves felony offenders whose offenses are related to substance abuse. To be eligible for drug court, the state’s attorney must recommend it as a part of the individual’s probationary sentence. Then it’s up to the judge to decide.

Drug Court is a five-phase program. In phases I and II, clients meet with the judge and team members weekly. In Phase III the meetings are every other week. And, in Phase IV and V the meetings are once a month.

The Drug Court meets in front of Fourth Circuit Judge Francy Floral. The Drug Court team, including Hubbard and others, sit on a table to the side of the judge’s bench. Drug Court participants sit in the gallery benches. There is a podium near the front for clients to come forward and speak.

“Some people thought that I was a volunteer. I was actually getting paid through a contract with the state, but I probably would have done it for free,” Hubbard admits.

Karen Paige Hunt will now serve as the defense attorney on the Drug Court team.

Most participants accepted into drug court spend at least a year and a half in the program. Drug court allows nonviolent drug offenders to avoid going to prison if they complete extensive treatment, pass frequent drug tests, and undergo intensive probation supervision.

“To me it’s kind like psychological boot camp. Most everybody gets through it. I’m not sure how they do it,” Hubbard said.

“Three-quarters of them will never wear another set of handcuffs,” he said.

The downside is that it is expensive. In South Dakota, a probation officer has about 100 people on his/her caseload. In drug court, it’s between 15 and 20, Hubbard said.

“Overall it’s expensive versus regular probation, but it isn’t expensive if you look at the penitentiary costs, social services costs, and the healthcare costs,” he said.

The goals of the Northern Hills Drug Court are to increase public safety, save money, and reunite addicts with their families. After completing their program, the clients are honored at a graduation ceremony.

The Northern Hills Drug Court, the first in South Dakota, was established in Sturgis in 2007. The Drug Court Program is a collective effort of agencies who serve clients from Meade, Butte, Lawrence, and Pennington Counties.

Former South Dakota Attorney General and Sturgis native Marty Jackley, who has spoken at Drug Court graduations, called Drug Court a success story and model program for other drug programs in the state.

Jackley has said that participants over the years have told him it would have been easier for them to serve out their prison time instead of facing their demons head-on.

The vast majority of those in the program are repeat offenders and are looking at time in the state penitentiary. Drug Court is an alternative to that prison time, Hubbard said.

“For many of them the motivation is that they are sick and tired of being sick and tired. There has got to be a desire to not just stay out of prison, but to make your life better,” he said.