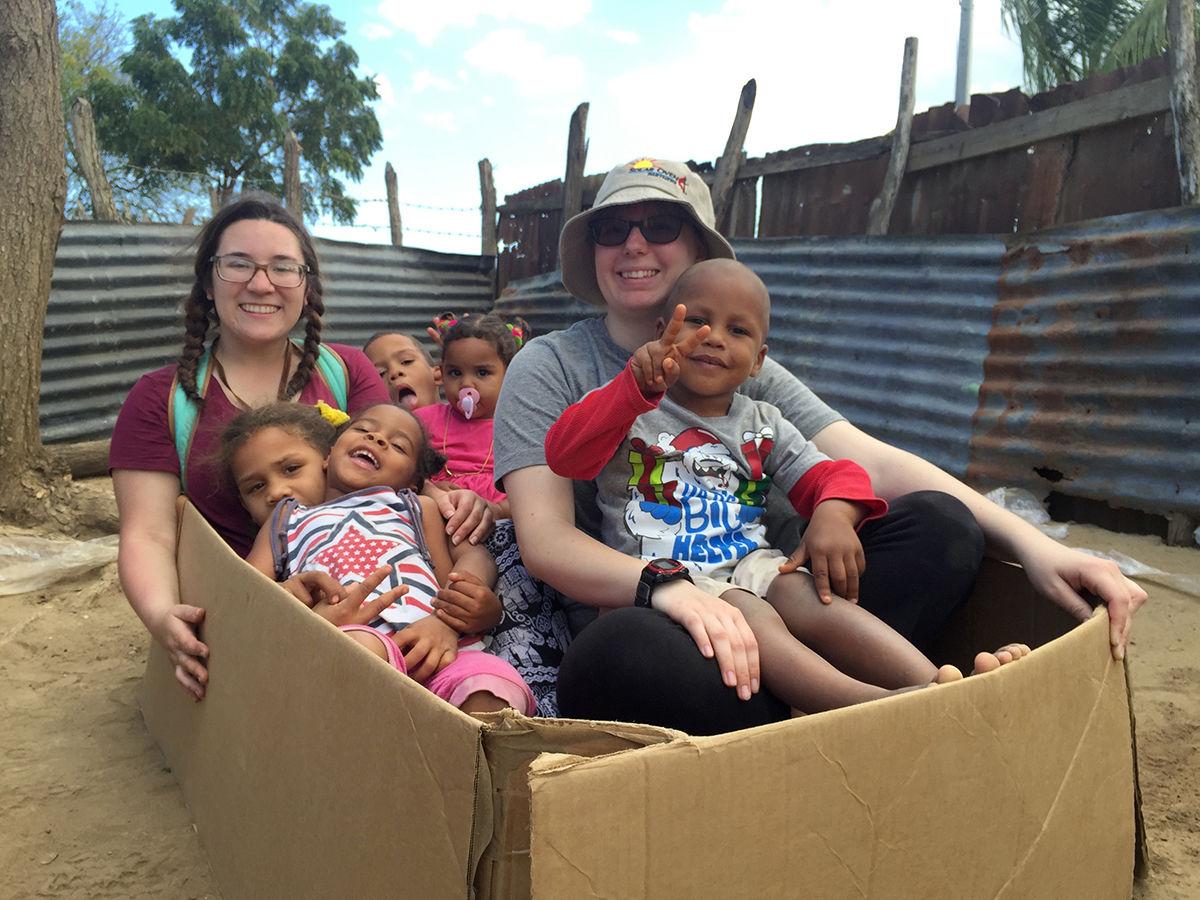 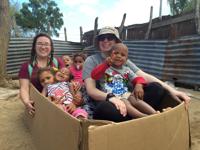 Zona Hairgrove and Emily Warns, BHSU students, play with Dominican children while their parents attend a workshop to learn about solar ovens during a recent mission trip to the Dominican Republic. Pioneer photo by Deb Holland 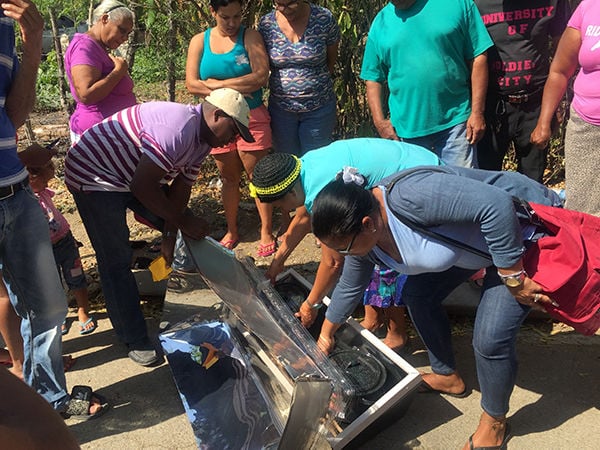 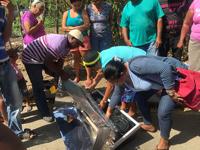 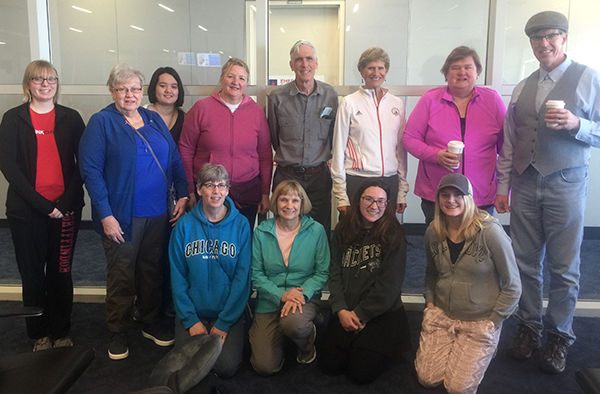 Zona Hairgrove and Emily Warns, BHSU students, play with Dominican children while their parents attend a workshop to learn about solar ovens during a recent mission trip to the Dominican Republic. Pioneer photo by Deb Holland

DOMINICAN REPUBLIC — The humid air hangs thick, permeated only by the smell of wood smoke. In the distance, a rooster crows, the sound stifled by the rev of a 100-cc motorcycle carrying a mom and three children all clad in their baby-blue school uniforms.

As the town of Monte Cristi comes to life on this sleepy Tuesday, a group of American missionaries load a bus enroute to a location on the edge of the city.

Once there, they will build solar ovens, teach the locals how to transform their own recipes to solar oven cooking, and give hope to those living in poverty, some who survive on 3,000 to 6,000 pesos a month – or about $60 to $122 a month U.S. at the current exchange rate.

Solar Oven Partners is a United Methodist Volunteers in Mission (UMVIM) project that works to place solar ovens in the hands of the poor in deforested lands. The group partners with the indigenous churches and relief organizations to help alleviate human suffering and environmental destruction.

She said she had heard about the joy solar ovens were bringing to those in the Dominican and wanted to be a part of the program.

“I have a passion for helping people and I fell in love with the Dominican Republic and their people,” she said.

Her career aspirations are to teach English as a second language and work with students with special needs.

Others on the trip from the Northern Hills included BHSU students Emily Warns, Kathryn Mah, and Rachel Buxcel, Pastor Scott McKirdy and Colleen McKirdy and Chris Davis, all of Spearfish, and Deb Holland of Sturgis.

They worked with Rev. Erasme Figaro, the national director of the Solar Oven Mission in the Dominican Republic. A pastor with Iglesia Evangélica Dominicana, an Evangelical church in the Dominican, Figaro’s duties include working with the social action director of the church on projects. Solar Oven Partners is one of those projects. Initially, Figaro worked on the project only when teams of volunteers would come to the country. But the effort has been so popular that he promotes solar oven cooking year-round. He estimates it takes about half his time as a pastor now.

“Since I was in primary school, I was involved with a group that wanted to take care of nature,” he said. “Somehow I have been involved in helping protect the environment since.”

The vision of the Evangelical church in the Dominican is to take the love of Christ out of the church building to the people in need throughout the country, he said.

Figaro appreciates that the program doesn’t just hand out ovens to those in need, but rather shares information about why solar oven cooking is a better alternative than cooking with wood, charcoal or propane.

“We certainly teach these people about the ovens but also about what we are doing to the environment,” he said. “And as Christians, we need to take care of nature because that is responsibility God has given us.”

Additionally, program participants learn about the cost-savings of cooking with solar heat. According to climatemp.com, most locations in the Dominican Republic get sun about 70 percent of the year.

As part of the curriculum at solar oven workshops, Figaro gathers examples of how much is spent on cooking fuels per month by program participants. For some, it is about 800 pesos, or about one-quarter of their monthly income.

“We also talk about how cooking and baking with the oven will help keep the family unit intact,” he said.

Many families are having to separate just to keep the family fed. Some may live with their father and his extended family in one location and their mother at another location.

Deisy Polanco, a pastor of the Iglesia Evangélica Dominicana in Monte Cristi, a town of about 50,000 in the northwest corner of the country near the Haitian border, works with some of those fragmented families.

Monte Cristi has a small fishing industry and produces salt to sell to the U.S. It was once a major shipping center but now is a backwater village. The majority of the population lives without potable water, no reliable public utilities, high unemployment, a broken health care system that they cannot afford, and a growing drug problem among the youth.

Polanco characterized the community as poor and said that if you travel just outside the capital city, the poverty is even more stark.

“The solar oven program is a good opportunity for them. If they don’t have to use $1,000 pesos on gas (propane), they can buy rice or beans for their family,” she said.

Figaro concurs, saying money the Dominicans don’t have to spend on fuel can be spent on other ingredients to feed the entire family.

The Solar Oven Partners program has been on the ground in the Dominican Republic for just two years, and prior to that, the program had operated in Haiti for nearly 20 years.

However, locals are skeptical about embracing the ovens.

“They are worried that we are not going to give them what we say we are offering,” Figaro said. “Even me, after doing this for so many years, when I see something come out of the oven, I get surprised.”

Solar Oven Partners U.S. Director Marj Evans-de-Carpio, who travels with the Volunteers in Mission teams, tells the story of a woman who brought her own ingredients to a workshop to make sure the organizers weren’t using some sort of special foods that cooked quickly.

“We go to the same market they do, buy the same foods they do, but cook them in the solar oven,” she said.

On another occasion, a Dominican woman told another that the workshop organizers just switched the foods in the pots when the participants weren’t looking. Another woman set her straight saying she had sat by the oven from the time they placed the pots and there was no switching done.

Slowly, people are warming to the benefits of solar oven cooking.

“Each time we go out and do a presentation, we get more people. We’ve gone from presentations with 10 or 20 people to some with 70 to 80 people. It has just snowballed,” Figaro said.

During the recent trip by the solar oven team, there were 162 ovens sold – a new record.

The day prior to the seminar in the Guatapanal section of Monte Cristi, the mission volunteers went door to door in the neighborhood to let people know about the solar oven workshop the following day.

The marketing worked bringing in nearly 80 participants. The miracle of solar ovens intrigued not only women and children, but adult men as well. Ovens can reach more than 300 degrees Farenheit, with most foods cooking in two to four hours.

The key to cooking in a solar oven, said Evans-de-Carpio, is to cut the food into smaller pieces because the solar oven is slow cooking and huge pieces will take even longer. Another thing is to use measuring cups and measuring spoons.

Dominicans are not accustomed to doing that, especially with rice – an everyday staple in their diet.

“They would eyeball it. When they are cooking over fire they pour in water and then the rice. As it cooks they ladle off a spoonful of water if it doesn’t look right. But in a solar oven you can’t open it up and check it,” Evans-de-Carpio said.

Although some middle-class Dominicans can now afford ovens, a large portion of the county’s residents cook over wood fires or use propane. They buy baked goods from a bakery or supermarket, or buy individual rolls sold by vendors on the street.

“Not many people know how to make breads or cakes. This is a new concept for these people,” she said.

A segment of the solar oven workshop is spent teaching them how to use the measuring cups. Evans-de-Carpio encourages them not to pack the flour in the cup, but instead spoon it in delicately. And when filling the cup with liquid do so that it is almost overflowing.

A cookbook, with recipes written in Spanish, is given to each person who buys a solar oven. They also get three cooking pots, a bread pan, a reusable water pasteurization indicator, and two potholders.

Evans-de-Carpio said people are attentive when she talks about the financial savings and the health benefits of using solar ovens, but they consistently react with excitement over receiving the potholders.

She tells them that the potholders are made by volunteers who have heard that they are struggling and want to contribute in some way. Many who make the potholders are praying for those who will receive them and send them as a sign of God’s love.

“That’s when they cheer and applaud. Not when I talk about saving money, being free from disease, or the environmental benefits, but when I say the potholders are sent as a sign of God’s love. I think it’s because these people have a feeling of being invisible and that nobody cares,” she said.

Figaro agrees, saying the program empowers the people of the Dominican.

“We are giving hope to these people,” he said. “We let them know that there are people out there that you can trust and are thinking about their wellbeing. That’s the most important part of the program.”