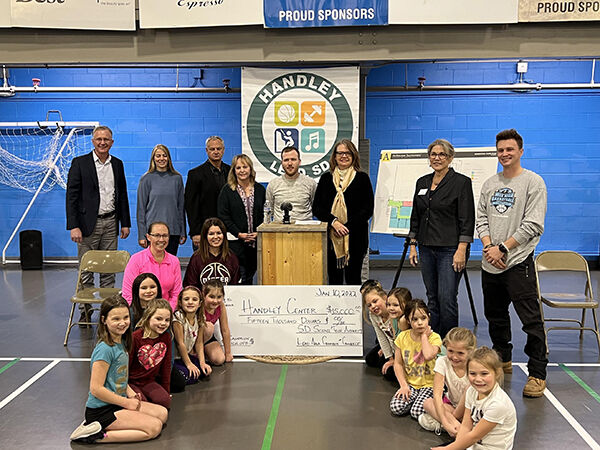 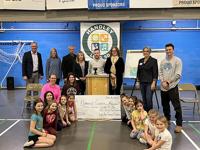 Students in the Digger Gym Ratz basketball program, one of the many programs that partners with the Handley Center to use the facility, pose for a picture with Sanford Lab and Chamber representatives who donated $15,000. Pioneer photo by Wendy Pitlick 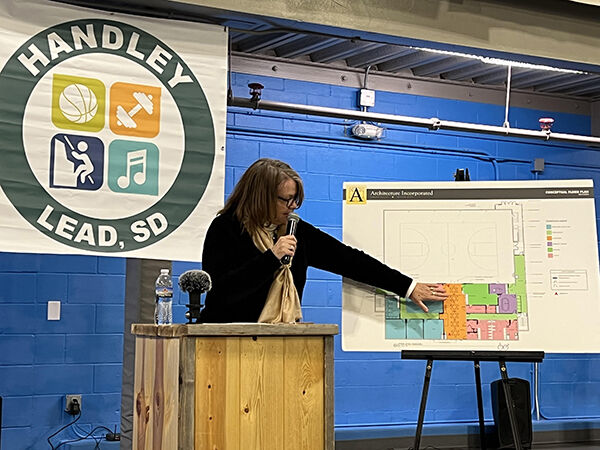 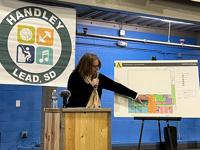 Students in the Digger Gym Ratz basketball program, one of the many programs that partners with the Handley Center to use the facility, pose for a picture with Sanford Lab and Chamber representatives who donated $15,000. Pioneer photo by Wendy Pitlick

LEAD — The Handley Center has kicked off a major capital campaign for building renovations, with a large donation from the S.D. Science and Technology Authority and the Lead Area Chamber of Commerce.

On Monday the Authority and the Lead Chamber presented the Handley Center board with a $15,000 check that will go toward paying for necessary renovations at the facility. The funds are part of the deal to transfer ownership of the Sanford Lab Homestake Visitor’s Center from the Lead Chamber to the Authority. The money is the first donation for the Handley Center’s capital campaign to raise $2.16 million to build a commercial kitchen for the Boys and Girls Club and for event concessions, create community meeting space, establish space for a daycare center, and more.

Mike Headley, executive director of the S.D. Science and Technology Authority, said the Authority wants to make a strong commitment to the community, and he is looking forward to working with the Handley Center to grow the Sanford Lab’s STEM education programs for kids.

“We want to focus on working with kids,” Headley said. “K-12 STEM education is a big part of what we do at SURF. So, we felt it was really a natural fit. I could see partnerships moving forward in the future. We want to have more STEM educational offerings at the visitor’s center and to partner with the Handley center on those types of programs. We’ve been involved in the community in the past, but by taking on the visitor’s center we’re going to be more up front than we have been, and we think that’s a great thing.”

Marsha Nichols, president of the Lead Area Chamber of Commerce, said the Chamber and the Authority chose to donate to the Handley Center because both entities believe in the facility’s mission.

“There are many worthy nonprofits in Lead,” she said. “But the fact that this could be used for generations of kids, and it has already been used by generations of kids, including my own, we just thought helping the Handley Center kick off their capital campaign was great timing for a great organization. We are very pleased to be able to do this.”

Karen Everett, who is the treasurer of the Handley Center board and who has served on the board since the building was constructed in 1989, gave a brief history of the facility as she explained the organization’s goals and plans. The 33-year-old facility thrived for the community in its early years, with a swimming pool, walking track, open meeting spaces, and exercise rooms. But when the board discovered that the heating system for the swimming pool would cost a great amount of money to fix, and the condensation and humidity from the pool was ruining the building, they were forced to shut it down. That sparked a debate among residents about whether the Handley should have city funding, and that year an initiative to pull city funding from the Handley Center passed in the polls by four votes.

“This building was at rock bottom,” she said. “But, the good news is when you’re at the bottom, all you can do is go up.”

In 2014, Everett said former board president Kayla Klein worked to bring the Boys and Girls Club into the building, and by that summer there were 100 kids enrolled in what is now the only after school program in Lead-Deadwood. The Handley Center does not charge the Boys and Girls Club for the space, but prefers to partner with the organization to fulfill the need for kids in the community, she said.

Immediately after the Boys and Girls Club moved into the Handley, Everett said board members began looking for ways to transform the former swimming pool area into a gym with a multi-use floor. Research showed that the transformation would cost $750,000.

“We were devastated because we were hoping it would be about one-third of that,” she said. “We thought we would never get this gym.”

But major donations, grants and other financing made it possible for the Handley Center to install the floor and build the gym that is now used for skate nights, basketball, baseball, archery, and many other activities.

Everett pointed to that success story as proof that the Handley Center board will be able to move forward with its plans for renovating the building, especially since, she said, renovations can be done in phases as funds are raised.

“The cost of this project is $2.16 million, which sounds very unachievable right now. But the $750,000 floor we are sitting on we never thought would happen. So, with donations like this from the Sanford Lab Homestake Visitor’s Center, it’s just one step closer to making it a reality.”

The $2 million figure includes $1.5 million for the main floor renovation, $400,000 to renovate the outside of the building, $85,000 for a commercial kitchen, $73,000 for indoor classroom and meeting room furnishings, and $100,000 for fundraising, administration costs and operating staff for two years, according to materials that were passed out at the event. Once the indoor classroom space is completed, Everett said the Handley Center plans to move forward with a partnership with Northern Hills Alliance for Children, to provide more space for a daycare facility. That, combined with the Boys and Girls Club and the Handley Center’s need for kitchen space to provide meals for kids and concessions during events, are a major reason the board hopes to be able to raise funds quickly.

“The lack of childcare space is higher and more apparent now than ever,” materials from the Handley Center state. “Parents are unable to get to work due to the lack of childcare available in the Lead-Deadwood area. Startup businesses or community organizations are struggling to find locations to physically meet due to COVID or staffing restrictions. Our community needs a sense of hope that doors will remain open, that working is an option for them, and that their community center will help lift them up. This new center will accomplish all of that and more.”