Grayson Chapeau poses with the 1,700 pounds of pop tabs he and his family raised for the Denver Ronald McDonald House in October. Courtesy photo 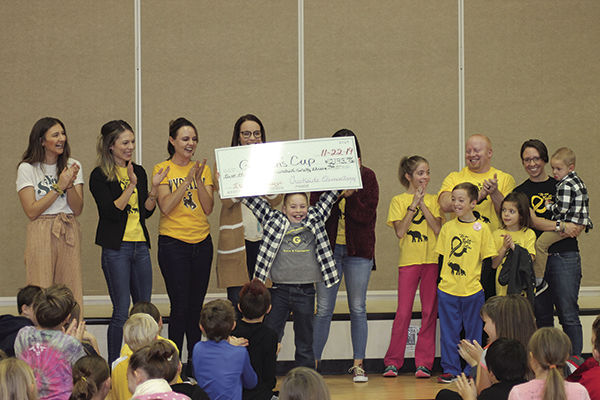 Grayson Chapeau and his family received a check for more than $2,000 raised, which was raised by the Creekside Elementary third-grade class as part of their “The Big Squeeze” community fundraiser project. Pioneer photo by Alex Portal

Grayson Chapeau poses with the 1,700 pounds of pop tabs he and his family raised for the Denver Ronald McDonald House in October. Courtesy photo

Grayson Chapeau and his family received a check for more than $2,000 raised, which was raised by the Creekside Elementary third-grade class as part of their “The Big Squeeze” community fundraiser project. Pioneer photo by Alex Portal

SPEARFISH – What started out as a half-gallon bag of pop tabs has turned into a 1-ton mission for one very enthusiastic Spearfish boy.

“It’s one pop tab, but if you put them all together, it equals a lot,” said Grayson Chapeau, A.K.A. the Pop Tab Kid, as he explained goal of collecting 1-ton of the aluminum bits for the Ronald McDonald House in Denver, Colo. “Our next goal is 2,000 pounds.”

When Grayson Chapeau was four years old he was diagnosed with a form of brain cancer called astrocytoma, shortly after, as he and his family were preparing for their first trip to a Minneapolis children’s hospital for treatment, a friend gave Grayson’s mom, Chelsey Chapeau, a half-gallon bag of pop tabs to take with them. It was then that they discovered the pop tab-recycling program for the McDonalds houses.

“(The pop tab) is more valuable than the can itself,” Chelsey Chapeau explained.

Ronald McDonald Houses are places throughout the country where traveling families can stay, free of charge, near to where their children are receiving treatments for cancer and other medical emergencies.

Although Grayson Chapeau and his family are able to stay with family in Denver when they travel for his treatments, he’s still on a mission to collect as many pop tabs as he possibly can, which they drop off at the local Ronald McDonald House when they’re there.

“It’s such a great place for so many families,” Chelsey Chapeau said.

After that, Grayson decided to set a goal of 100-pounds of pop tabs to take with him the next time he visited the hospital.

Since then, Grayson Chapeau has steadily increased his goals and has been spreading the word whenever he can to get more and more pop tabs collected.

Chelsey said they’ve received pop tab donations from all across the country from people who have heard Grayson Chapeau’s story and want to be a part of his incredible mission.

“He loves deeply, is what we say,” she said. “So they just love being a part of Grayson’s pop tab challenge.”

In November, Grayson Chapeau had to travel to Denver to have brain surgery, but he and his family were bound and determined not to arrive empty-handed. With community support, the Chapeaus were able to amass 1,700 pounds of pop tabs, including their single largest donation to date from the Belle Fourche School District.

“In one week … they raised 187-pounds of pop tabs, which is the biggest (donation) we’ve had from the schools at one time,” Chelsey Chapeau said.

Along with the pop tabs, Grayson Chapeau’s third-grade classmates at Creekside Elementary raised more than $2,000 selling lemonade for a community service project to help the Chapeau’s with their travel expenses and medical bills. Grayson Chapeau and his family were presented with the check at an assembly Friday.

“Having the community back you up has been incredible,” Chelsey Chapeau said.  “This is our village, and it takes a village to make it through these hard points.”