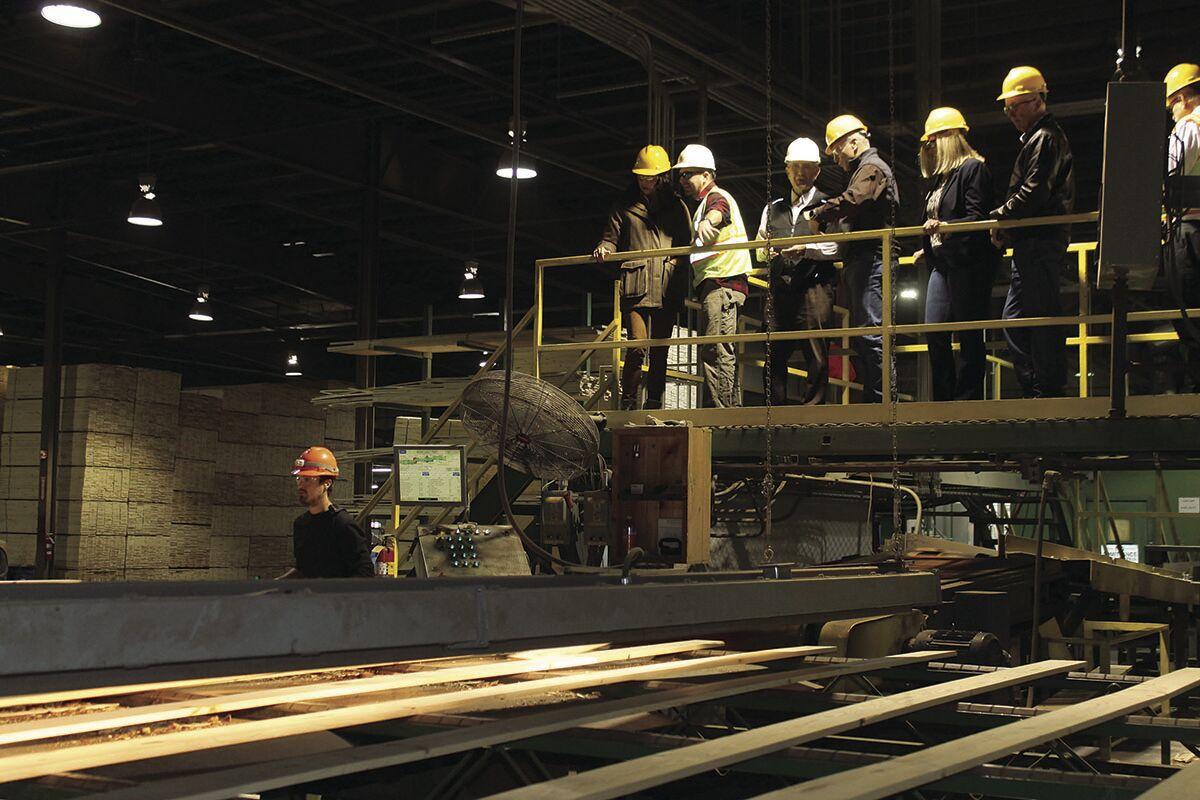 Gov. Kristi Noem, top left, took a brief tour of Spearfish Forest Products Monday, led by Marcus Neiman, left of her, and was joined by officials from the South Dakota and Wyoming legislature and both state’s forestry service, including Wyo. Gov. Mark Gordon, top third from left. Pioneer photo by Alex Portal 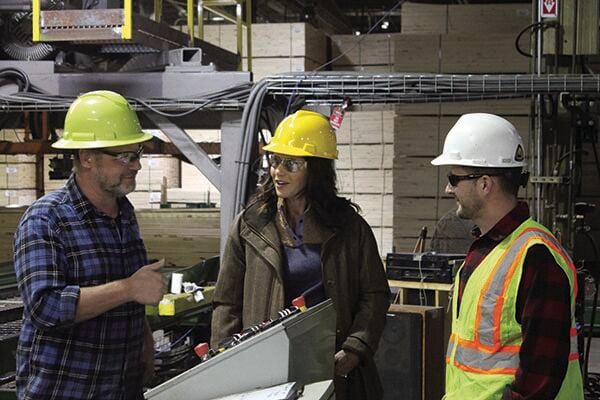 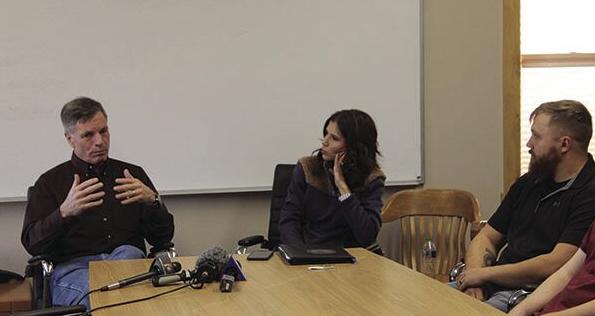 Gov.’s Noem and Gordon met with state officials and Neiman Enterprises employees Monday to discuss timber sales and forestry management in the Black Hills as well as in other states with national forestlands. Pioneer photo by Alex Portal

Gov. Kristi Noem, top left, took a brief tour of Spearfish Forest Products Monday, led by Marcus Neiman, left of her, and was joined by officials from the South Dakota and Wyoming legislature and both state’s forestry service, including Wyo. Gov. Mark Gordon, top third from left. Pioneer photo by Alex Portal

Gov.’s Noem and Gordon met with state officials and Neiman Enterprises employees Monday to discuss timber sales and forestry management in the Black Hills as well as in other states with national forestlands. Pioneer photo by Alex Portal

“This mill here is in jeopardy if we don’t start getting the (National) Forest Service to release more timber under contract, which means that it can be milled and it can get into the production supply chain and make sure that we protect these jobs, but not just that, it’s about maintaining healthy forests,” Noem said.

Noem was referencing a general technical report (GTR), which was assembled by the Rocky Mountain Research Station, and presented to the National Forest Service in February. That report recommended that the Forest Service drastically reduce the amount of timber it allows sawmills, such as Spearfish Forest Products, Inc. to harvest from the forest. This report has Neiman Enterprises, the company that operates several wood production facilities in the area, more than a little concerned. The company already had to shut down its Hill City sawmill in March as a result of dwindling timber sales.

“People who live here, who’ve worked on the land for decades know that what the Forest Service is giving us for information isn’t accurate,” Noem said. “So if we can make sure we’re backing up what we know to be true in real research and surveys and studies, …  maybe they will change their projections for the timber harvest in the future.”

While there were no representatives from the National Forest Service at the meeting to defend their findings, Noem and Gordon met with state officials from both the South Dakota and Wyoming legislature and both state’s forestry services to discuss the harsh terms being dictated by, what they described as out of touch bureaucrats in Washington.

“We have good local Forest Service people that we work with, they may send up information and data but it gets lost in the chain or purposely buried,” Noem said. “Unfortunately when it gets up into the bureaucracy of what happens in Washington, D.C., a lot of the feedback that we have and information that we have (at the state level) just stops and never changes a decision,” Noem said. “There are definitely elements within the (National) Forest Service that have an agenda of not touching these forests. Using the same type of natural methods that were used 100 years ago, the difference is that these forests are different today, people live there now, … we’ve changed the way that these forests grow which means that they have to be treated differently now.”

Noem and Gordon also visited with employees from the plant to get their feelings and feedback on the subject.

“Aside from taking away safe jobs that put food on someone’s table, if we’re not going to adequately manage the forest and reduce the timber harvest then mother nature will take care of it for us and we have no control over that in terms of fires and bugs,” explained Cody Clutter, an employee with the sawmill’s IT department. “Then we’re going to see great big fires taking out towns like Deadwood, Hill City, or Custer.”

Gordon said after looking into Neiman Enterprises history of forest management, he was impressed with the improvements in advancements the company has been able to make to adapt to the changes the Black Hills Forest has undergone as it’s population has grown.

“Fire’s clearly a huge issue in a densely populated forest, it’s obviously putting a lot of property at risk, but more importantly for climate change – if this is one of the biggest concerns that we have – oxidizing trees rapidly, or oxidizing them over decades is clearly not the thing you want to do,” Gordon said. “What you want to do is have growing, diverse forests that are healthy and, gosh, you can do that by keeping people employed.”

“You’re never going to get the (National) Forest Service to listen to you,” Steve Grass, a 30-plus-year veteran employee with Neiman’s said. “After 30-some years I used to go to all the meetings and everything, and 99% of the people there did not want them to do what they were going to do and they did it anyway.”

Noem said the only way to get changes made to the National Forest Service’s recommendations would be to apply political pressure. She pointed to her time in congress advocating for the Forest Service to alter its timber sale allocations during the mountain pine beetle epidemic.

“It was kind of amazing to me, just the bureaucracy I ran into at the (National) Forest Service, they didn’t give a rip,” she said. “It wasn’t until the political pressure built, until we got enough members of Congress and senators to care enough to make it an issue.”

At that time Noem was calling for the Forest Service to allow more timber be removed from the forest in order to slow the spread of the invasive bug. Now that the forest has recuperated, and the Forest Service wants to pull back on the amount being taken, Noem said it’s time for states with federal forestlands to band together and push back against the feds.

“I’m going to be asking Gov. (Gavin) Newsom (of California) and maybe (Gov. Jared) Polis in Colorado, (Gov.) Kate Brown in Oregon, they’ve all had tragic wildfires this year and they’ve been dealing with the reality of that; the threat to public safety, the costs of it – see if they would be interested in going to the (National) Forest Service with me,” Noem said.

“And here you have two governors that are in alignment on this issue, the forest is not defined by a state boundary, it’s a region,” Gordon added. “So there’s hope.”

Noem said she aims to gather a coalition of bipartisan state leaders who will stand with her to assemble their own forest inventory data through independent consultants, to appeal the National Forest Services’ findings.

“These (other state leaders) have been in leadership positions and they get the same information handed to them that we get; they look at it through a different lens, but the reality is that the best time to get them on board with reevaluating what the (National) Forest Service has been feeding them is right after they’ve been through a year like they’ve been through with all this tragedy they’ve seen,” she said. “It’ll cost us some money so we’ll need to have the support of the legislature to do that: get the data we need to make the argument in court and with the Forest Service.”