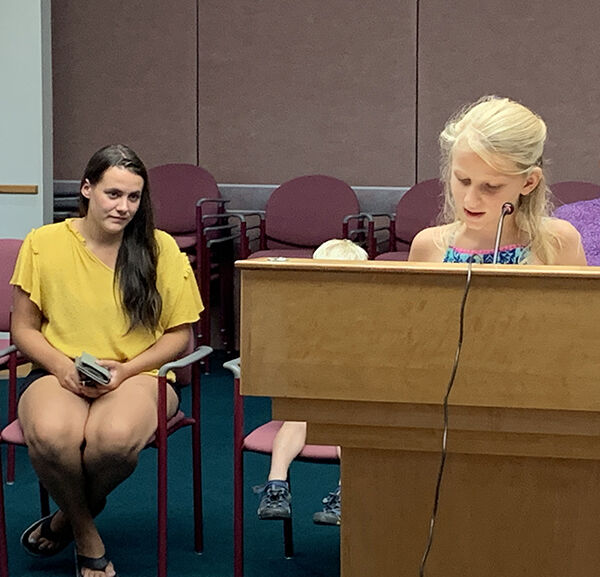 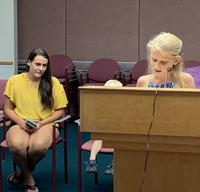 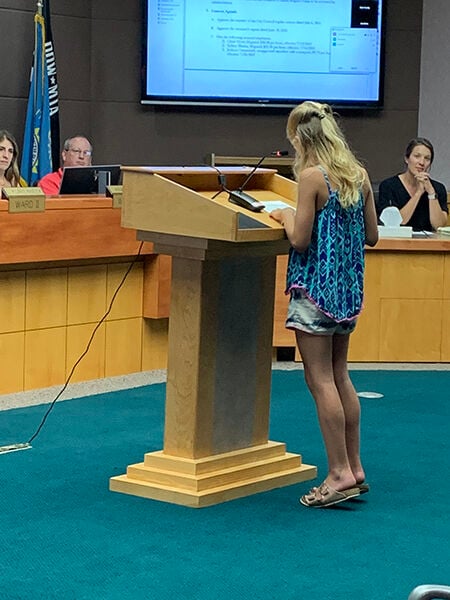 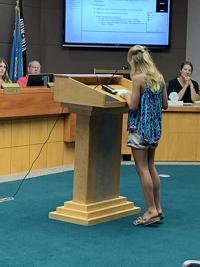 Lou Bell, 10, has to stand on her toes to reach the microphone, but that didn’t stop her from sharing her opinion about Dowers Hole in Spearfish Creek, to the city council. Pioneer photo by Mark Watson

Lou Bell, 10, has to stand on her toes to reach the microphone, but that didn’t stop her from sharing her opinion about Dowers Hole in Spearfish Creek, to the city council. Pioneer photo by Mark Watson

SPEARFISH — Most Spearfish City Council meetings are sparsely attended by the public. That was no different Monday, but one person addressed the city council during the public comment period.

Lou Bell, 10, who recently moved to Spearfish from Pennsylvania, wanted to discuss the changes made to Spearfish Creek near Salem Park.

“Thank you for letting me speak about a place that I really like,” Bell said. “I recently moved to a house on Third Street, and I swim at Dowers Hole pretty much every day. So do my brothers. I’ve met a lot of friends there. … I hope that Dowers Hole stays just like it is for a longer time.

She said she did not want the city to take rocks away, which were placed in the water by creek users.

“I think the job of the government is to protect our freedom, not to wreck the swimming holes,” she said, standing on her toes to reach the microphone on the podium.

Last year, she said, she started to learn about the U.S. Constitution when the city she lived in, “violated it and took away all the things I cared about,”

“They put police tape around the playground, they told our school they had to close. I couldn’t take dance lessons, I couldn’t compete in running. They told me I had to stay in,” she said.

“I really appreciate you coming to city council and sharing that. It takes some bravery to do that. Good job,” Boke told Bell. “Dowers Hole, we’re not taking away Dowers Hole. We did have to remove those bridges because they were in a place that when the water got high in flooding, it would flood out some houses. So in order to protect some houses in your area we had to take out the bridge. … When we took out the bridge we were required to take out some of those rocks that were causing some problems. So, yes, we had to do that, because those are the rules we have to work by, but we’re not taking away Dowers Hole. We have no problem with you playing down there whenever you want.”

The bridges crossing Spearfish Creek adjacent to Salem Park were removed in June after the Federal Emergency Management Agency found that the bridges were in a floodplain and could cause flooding. The bridge location at Peoria predated FEMA and was grandfathered in which allowed it to stay. However the Rushmore Street bridge, immediately downstream from Dowers Hole, was required to be removed. City officials placed it at the Peoria crossing.

Then, in order to restore the banks to their more natural state and maintain them, city had to remove stones from the creek, which have been placed there to create a man-made pool in the creek. City Engineer Kyle Mathis said this has been done numerous times over the years, but people put the rocks back.

“The problem is it’s shifting the stream channel slightly and widening and causing a little bit of bank erosion,” Mathis explained. “When you make changes in a floodway, put some physical structures in it, it’s going to make changes to the channel so we’re trying to reestablish that.”

Bell said the swimming hole isn’t as deep as it was, but still is above her head.