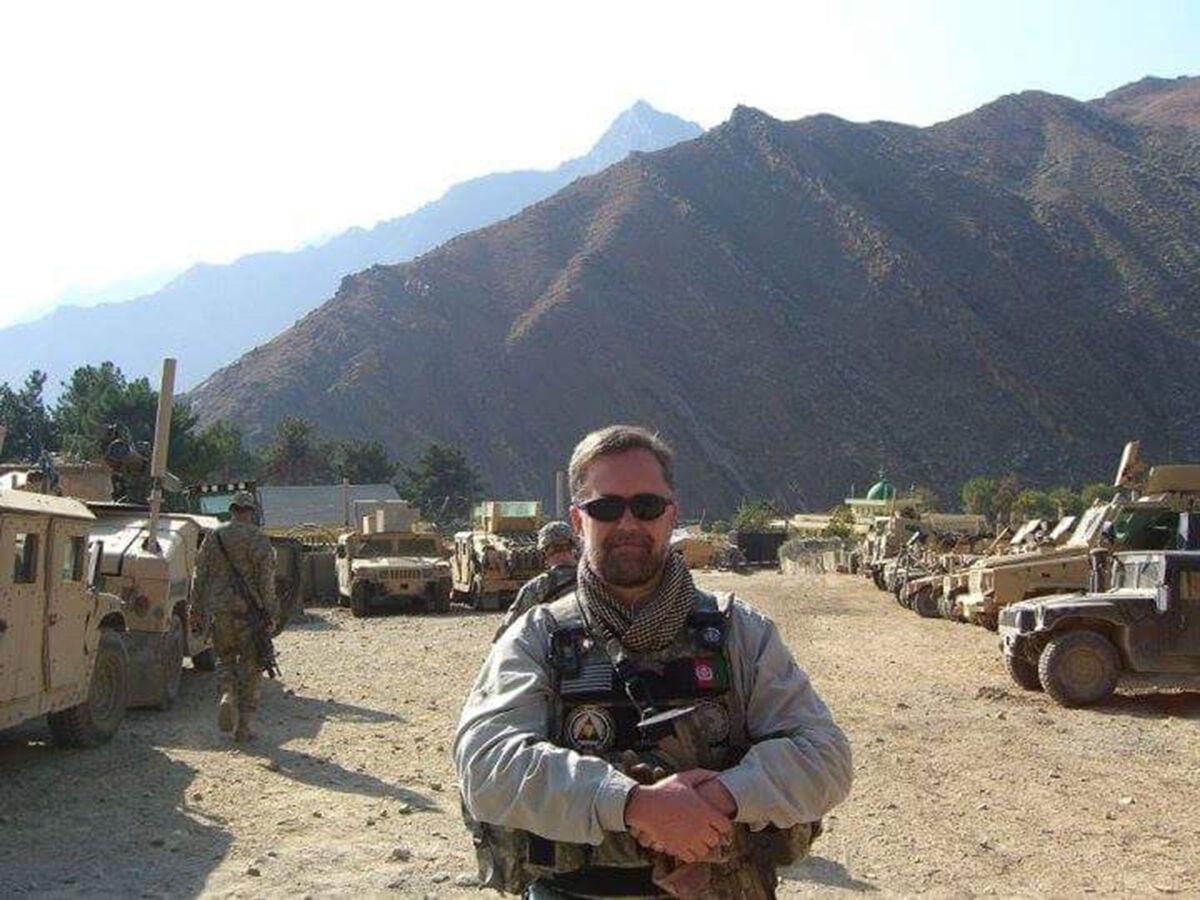 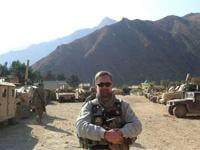 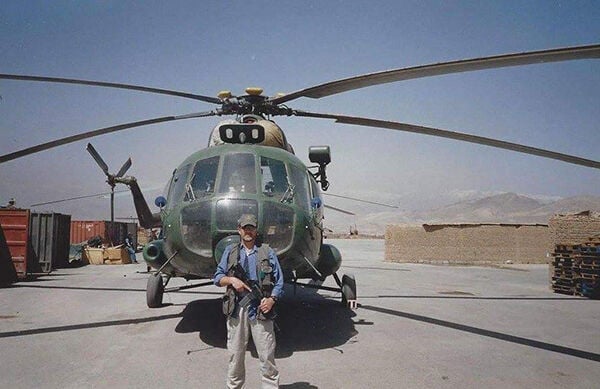 PIctured is Moeller at an airport in Kabul. Courtesy photo

PIctured is Moeller at an airport in Kabul. Courtesy photo

SPEARFISH — While the world watches the chaos unfold at the Kabul airport – the United States and other allied forces evacuate their staff and Afghans who helped them - a Lead man weighed in on the mission.

Ron Moeller served for 25 years in the CIA as a paramilitary officer.

He ultimately served 12 tours in Afghanistan ranging from three months to 13 months.

Before his CIA career, he was in the Air Force for 11 years.

Paramilitary officers are another option for the president use to conduct covert actions and clandestine missions.

“Instead of sending a diplomatic note or the Marines, he can send in a few agency guys,” Moeller said.

He said he saw an ad for the CIA and applied.

He got an interview, took tests, and conducted subsequent interviews and tests.

Ultimately he was hired. In January 1988 he was discharged from the military, and one week later he started his job with the CIA.

He began months of training on how to be a foreign intelligence collector.

“We’re not agents; we’re officers. That’s where Hollywood always gets it wrong. … We recruit the agent. We recruit the people that betray their country. I don’t betray my country. A small but important distinction,” he said. “My wife (Gabi), she’s a retired Army officer. She’s counter intelligence. The joke always is, I would recruit the spies, and she would catch the spies. Of course they were spies spying on the United States. She was really good at it too.”

He already spoke German but then was sent to learn Arabic, graduating right at the end of Operation Desert Storm.

He thought he had missed his chance to see action.

He worked in various capacities until he was in Budapest, Hungary, for a joint counterterrorism training exercise in September 2001. On 9/11, he and other members of the exercise participants went to lunch. Upon their return to the embassy, Hungarian armored vehicles were posted outside the building. Marines were fully equipped, and TVs inside the facility were all turned to different news networks.

“I got there just in time to watch the second plane crash into the tower,” Moeller said.

With the ambassador and senior officials away from the embassy, it was up to him to brief the employees – his most stressful briefing he’d ever conducted.

He deployed to Afghanistan in January 2002 as part of the second wave of paramilitary officers. He stayed through Operation Anaconda that occurred that March.

In 2006 he returned to Afghanistan for his sixth or seventh tour there, this time as chief of base at Bagram Air Field.

Years later, he served as the Afghan expert for a special taskforce that reported directly to Adm. Mike Mullen, the chairman of the Joint Chiefs of Staff.

Part of that dealt with the controversial CIA drone program.

“Whenever we struck a worthwhile target the Pakistanis would launch a protest,” Moeller said.

Which begs the question, did the Pakistani military know Osama Bin Laden was there?

He said, although he didn’t follow the situation, he is sure the Pakistanis knew Bin Laden was there, “Or (he and his family) did the best tradecraft any spy agency has ever done.”

He said the Pakistanis showed other revealing traits.

At a Pakistani camp at Miramshah, Pakistan, there was an airfield. On the opposite side of the airfield was the headquarters of the Haqqani network.

The Haqqanis, he said, were the most aggressive and most violent of the Taliban offshoots.

He gave another example.

“When I was on the Afghan side of the border, we watched the Taliban lay their rockets on the side of an irrigation ditch. … We’d watch those guys, busy little beavers, and maybe 50 feet above them was a Pakistani army frontier corps outpost.”

‘This is the border.’

What was the primary mission in Afghanistan?

“It was to capture or kill al-Qaeda and Osama bin Laden,” Moeller said.

The U.S. told al-Qaeda to turn bin Laden over, but they refused, launching the start of the 20-year war.

But the U.S. quickly lost focus on the objective.

“Even before (Operation) Anaconda was over, a bunch of the paramilitary guys, who spoke much better Arabic than I did, got pulled out to go to Iraq,” he said.

Then in December 2001, the U.S. set up a central government in the country under the Bonn Agreement.

“The central government was always a figurehead,” Moeller said “He would balance all the governors, warlords, chieftains.”

He said many Americans would say the provincial governors gave up too easily to the Taliban. But he said the Afghan president appointed each and every one of them.

Corruption ran rampant and the district residents had zero buy-in to that government, he said. The district leaders were not there for the large part. And even when a district governor was replaced, many times for corruption or human rights violations, he was just transferred to another district.

Have we stayed in Afghanistan too long?

He said the U.S. should have left within the first year, perhaps keeping Bagram and Kandahar air fields open to conduct counterterrorism operations, but he said “full on nation building … was ripe for disaster.”

What are the biggest missteps right now?

“The current situation? There’s way too many,” he said. “First off, the peace agreement that the media keeps referring to … No matter how we feel about this agreement, we allowed the Taliban to violate the agreement. We never said, ‘OK, unless you fix your violation, your agreement is null and void.’”

Unlike this country, where our citizens are Americans first, Afghans are very tribal with loyalty first to their tribe, sub tribe, and ethnicity long before the country.

“Northeast Afghanistan is very mountainous, very forbidding,” he said. “We’d go into an offshoot valley and drink their version of chai tea. We’d tell them we can dig a well for you, we can give you a mini hydroelectric thing on the mountain stream, we can build you a schoolhouse, we can improve your road, because my kidneys can’t take it. But first, point out the Taliban or al-Qaeda because we found some IEDs on the way up.”

He said they would always say there were no Taliban or al-Qaeda around, but the next valley over, that’s where they were.

So the next day, he and a civil affairs team would travel to the next valley and give the same pitch. Nope, no Taliban or al-Qaeda here, they would be told. But the next valley over, where he was the day before, that’s where the bad guys were.

“The terrain really separates these groups so that they don’t assimilate,” he said. “They assimilate in the cities. It’s like the Washington Redskins and the Dallas Cowboys, ‘We’re in the same league, but we don’t like each other.’”

Is there a Western response to get ethnic groups to agree with each other?

He said the U.S. has had a relationship with Afghanistan since the end of World War II, and the country was rolling along, but not thriving.

And then the Marxist coup occurred in the ‘70s, then the Russian invasion. “Since that first Marxist coup to today it has been in a constant state of turmoil,” he said. “The last 20 years, despite localized violence, the majority of Afghanistan, the people who have been born after we went in, have grown up in a period of relative peace and prosperity. I know a lot of readers would say, ‘well that’s not true.’ But I’ve seen the results.”

He said when he first saw Kabul in 2002, he said it looked like he stepped into a WWII newsreel.

“The city was trashed,” Moeller said. “When I left in 2013, a great majority of the city was rebuilt and modernized. One route from our camp on the north side of the airfield, where everyone is consolidated right now, we called it Route Vegas.”

It was lined with wedding chapels, and neon lights

The Afghans in their 20s and 30s, many have two cell phones. Afghanistan, except for the really mountainous regions, had 5G cell service. There’s talk about building a railroad to help exploit the country’s vast mineral wealth.

When the U.S. began its withdrawal from the country, the Taliban began its run leading us to today’s events.

Moeller’s son is on the ground right now as a member of the 82nd Airborne Division evacuating people from the Kabul airport.

“I was in North Carolina last week visiting him,” Moeller said. He declined to name him for security reasons.

Moeller arrived on Tuesday and on Thursday, his son received notification they would be leaving.

Friday morning, his son was flying to Kuwait where the soldiers were to serve as a quick reaction force. They were rerouted in the air to Afghanistan.

Do we have an obligation to evacuate the Afghans who helped us?

“Yes, but a very narrow focus,” he said. “The interpreters. The embassy staff, and those who worked on our bases, we made a commitment to them that we would take care of them. Because they worked with us, or NATO, they have a death sentence. Not just them, but their immediate family too.”

The Taliban has said that it has granted amnesty for governmental employees. Do you believe they will keep their word, or how soon do you think the executions will begin?

“The executions have already begun,” he said. “Friends of mine in DC and overseas are talking to Afghans who are hiding.”

One guy wrote that his interpreter was able to get his family out, but he was in hiding and he was watching the Taliban search his home for him on cameras in his house, he said. In Kandahar, people are being dragged out of their house and shot in the street.

“I don’t believe (the Taliban),” Moeller said. “In fact, I think they will be harsher than they were in the past.”

This is because many Afghans have identified themselves as pro Western.

Would it have been better to leave some force in Afghanistan?

“I don’t think there is enough newsprint and trees sacrificed to cover that,” he said.

Ultimately, he said, no.

“The Afghan leadership from the battalion level up were corrupt as hell,” he said.

Leaders were keeping their soldiers’ pay for themselves. They fought using bad tactics, and with little true leadership.

He also said that many people in the U.S. are raising a ruckus about the Taliban capturing all the equipment from Afghan forces.

This, he said would be just like what he saw with all the Soviet-era equipment that had been left behind after that war.

This is a rely excellent, top quality article on an important international issue, as good as anything in a national paper.