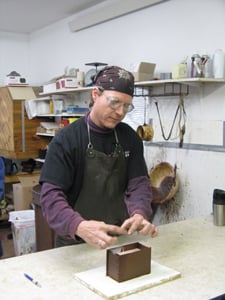 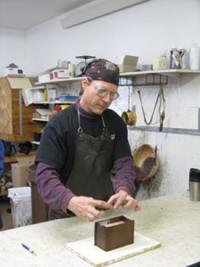 Grant Standard is shown creating a wax box where a type of rubber was poured over the Potato Creek Johnny nugget, using the lost wax method at Black Hills Bronze Foundry. The following day, the nugget was removed from the mold and wax was then poured into the mold.Courtesy photo 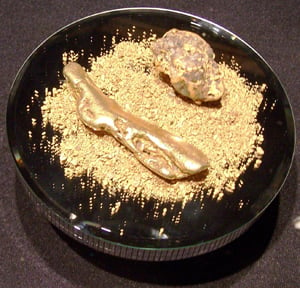 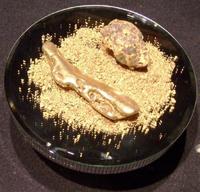 The Potato Creek Johnny nugget, left, and Icebox Nugget, right, are displayed on the placer gold used to create the PCJ2. Courtesy photo

Grant Standard is shown creating a wax box where a type of rubber was poured over the Potato Creek Johnny nugget, using the lost wax method at Black Hills Bronze Foundry. The following day, the nugget was removed from the mold and wax was then poured into the mold.Courtesy photo

The Potato Creek Johnny nugget, left, and Icebox Nugget, right, are displayed on the placer gold used to create the PCJ2. Courtesy photo

DEADWOOD — Who says history can't repeat itself? Well, sort of, anyway. An exact replica of the Potato Creek Johnny nugget, aptly named the PCJ2, will be made today at the Black Hills Bronze Foundry in Hill City.

The Clock Shop of Rapid City and the Adams Museum are partnering up to host a pour party celebrating this brand new piece of Black Hills history, created by melding the mold and gold of two of the area's largest gold nuggets.

“The placer gold taken from the site of the Icebox Nugget will be poured into a mold made from the famous Potato Creek Johnny Nugget,” explained Deadwood History Inc. Foundation Executive Director Mary Kopco. “The Clock Shop and Adams Museum are partnering to create a unique piece of history — the Potato Creek Johnny 2 gold nugget. Then, the replica gold nugget, truly one of a kind, will be auctioned on Sept. 22 to raise funds for the Adams Museum and Wounded Warrior project.”

Potato Creek Johnny's gold nugget is considered the single-most valuable artifact of Black Hills history in existence. In fact, both Johnny and his nugget became Deadwood legends. He eventually sold the leg-shaped piece, weighing 7.346 troy ounces, to pioneer businessman W.E. Adams in 1934, who then donated the nugget to the new Deadwood museum named in his honor.

“Stored in a bank vault, the original nugget is rarely shown,” Kopco said. “Instead ceramic replicas are used for display. In 2011, the gold piece was appraised at $500,000.”

“The father-and-son team also purchased 10.35 ounces of placer gold found in the area where the nugget was discovered,” Kopco explained. “The Clock Shop has generously donated this gold to form the PCJ2.”

Representatives of the two nuggets first met in April 2011, when the Potato Creek Johnny and Icebox Nuggets were displayed together in Rapid City for a limited-time viewing. “

Thanks to the enthusiastic reception of the large crowd at the event, The Clock Shop and the Adams Museum arranged to show the nuggets together again in July at the Adams Museum,” Kopco said. “As throngs of visitors gathered to witness these two unique pieces of history, Clock Shop owners Chris and Trevor Johnson proposed a novel fundraising concept-to create the PCJ2 and then auction it as a benefit for the Adams Museum.”

While Chris Johnson was in the process of putting together a proposal about the PCJ2, he met military veteran and Wounded Warrior Justin Shellhammer-a man who added an unexpected dimension to the project.

Shellhammer's story began after his enlistment in the US Army, training in the military police, and deployment to Afghanistan for Operation Enduring Freedom.

On April 5, 2005, when walking in the front of a group of soldiers, Shellhammer had spotted a mortar round on the ground.

“Imagine extending your arm in a gesture to warn the soldiers behind you, and feeling the impact of another person bumping you, pushing you slightly off balance. Consider regaining your balance, and stepping on a buried, active land mine with your left foot,” Kopco said.

Like many unfortunate soldiers, Shellhammer's leg was amputated at Walter Reed Hospital. But unlike most amputees, only a month later he ran two miles, and the following September, he ran in a 4-1/2K race to benefit the families of firefighters and policemen killed on Sept. 11, 2001.

Shellhammer attributes this determined spirit, along with his sense of humor, to assistance from the Wounded Warrior Project.

“After hearing Justin Shellhammer's remarkable story of bravery, Chris and Trevor Johnson expanded their fundraising idea to add the Wounded Warrior Project as a beneficiary along with the Adams Museum,” Kopco said. “They titled the project:  Preserve our History-Secure our Future.”

The Clock Shop and the Adams Museum enlisted the assistance of Black Hills Bronze, the area's only fine art foundry, to create the wholly new PCJ2.

The multi-step casting process has been recorded by Mediaworks to document its technical and industrial aspects by following the gold as it was refined, core-sampled, weighed and assayed by experts from Rapid Precious Metals and the South Dakota School of Mines and Technology.

Then, the team visited Black Hills Bronze to watch the molding of the original nugget; they taped the mold filling with wax, and the wax's trip through the ceramic shell department. The lost-wax casting process was completed today when the molten gold the placer gold taken from the Icebox Nugget site was poured into the ceramic shell during an once-in-a-lifetime celebration at the foundry.

“The mold was then destroyed,” Kopco said. “Thereby forever ensuring the uniqueness of the PCJ2 nugget.”

The PCJ2 auction will take place on Sept. 22 at Deadwood Mountain Grand. Rick and Margi Olesen with Dakota Plains Auctions will host the online and live auction. The Olesens are donating their services with all proceeds benefitting the Adams Museum and the Wounded Warrior Project. Other special events and celebrations leading up to the auction are currently in the works.