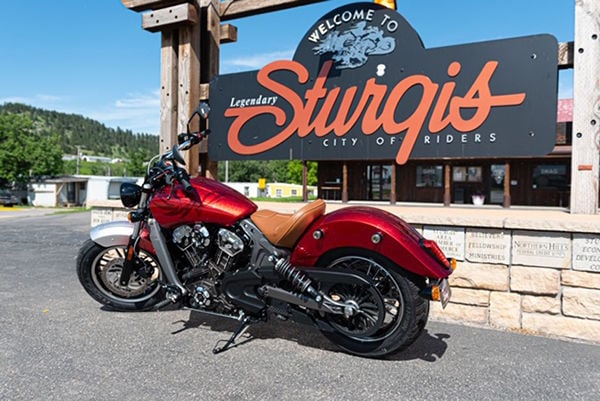 To raise funds to help combat human trafficking, Indian Motorcycle donated a new custom-painted Scout Motorcycle to the cause, which will be raffled online. The winner will be drawn/announced Aug. 9 at the Indian Motorcycle Dealership in Sturgis. For more information about the raffle, scan the photo using the Explore More BHP App. Courtesy photo 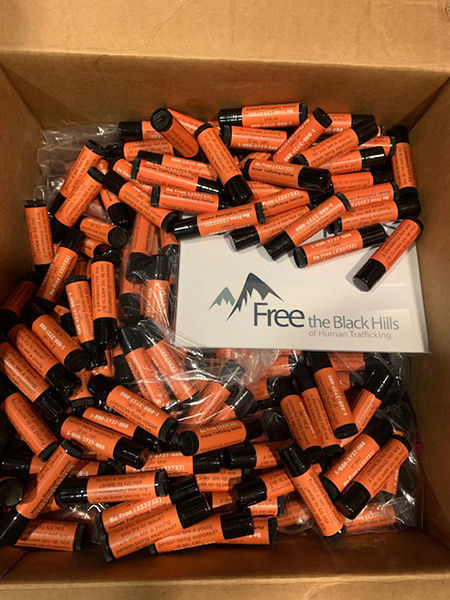 To raise funds to help combat human trafficking, Indian Motorcycle donated a new custom-painted Scout Motorcycle to the cause, which will be raffled online. The winner will be drawn/announced Aug. 9 at the Indian Motorcycle Dealership in Sturgis. For more information about the raffle, scan the photo using the Explore More BHP App. Courtesy photo

SPEARFISH — During the Sturgis Motorcycle Rally, thousands of visitors pour into the Hills to enjoy the festivities. With the increased population comes increased risks, and local organizations remind the public to be part of the solution to stop human trafficking by watching for red flags and reporting suspicious behavior.

“The Sturgis Motorcycle Rally brings in so many wonderful people to our area — and some bad situations. We want to be part of the solution,” Christina Fuhr, Free the Black Hills of Human Trafficking co-founder, said.

Human trafficking is a crime that occurs when a trafficker uses force, fraud, or coercion to control another person for the purpose of engaging in commercial sex acts or soliciting labor or services against his/her will.

As part of this year’s advocacy efforts to stop human trafficking, Indian Motorcycle Corporation donated a new Scout Motorcycle to the cause. Spearfish Polaris Paint facility custom-painted the motorcycle with nine coats, with a phoenix painted on the tank. Fully customized saddlebags were donated by Sid Keller of Mill Iron Staple Leather of Sundance, Wyo., as well. The motorcycle is being displayed at Indian Motorcycle Sturgis and other locations before it is raffled online. The winner will be drawn/announced Aug. 9 at Indian Motorcycle Dealership in Sturgis.

“We are so glad that so many are standing together to say, ‘Hey, let’s make this a safe, great Rally,’ including Indian Motorcycle Sturgis and so many others,” Fuhr said.

Raffle tickets are $20 each and may be purchased at epikproject.org/survivorbikescout/. Funds go to local and national organizations to fight trafficking through awareness, education, reporting, survivor care, legislation, etc., and anti-trafficking groups receiving the proceeds include Free the Black Hills, out of Spearfish, Fighting Against Trafficking, out of Rapid City, and two national groups, Ride My Road and the Epik Project.

In addition, Free the Black Hills of Human Trafficking purchased 20 cases of lip balm that are labeled with the human trafficking hotline number and distributed throughout the Black Hills before the Rally and throughout the year. Fuhr explained that the group works closely with the West River Human Trafficking Task Force, a multi disciplinary group of agencies, law enforcement, prosecutors, Department of Human Services, and nonprofits, to find a solution to the problem of human trafficking in the area.

Fuhr explained that this is the fifth year of distributing the lip balm, with fundraising occurring in various ways over the years to recoup the costs. She explained that local service organizations, church groups, and individuals have contributed, with some funds from the online Indian Scout Motorcycle raffle going towards the cost of the lip balms this year.

“The goals of the lip balm are for awareness, to be a tool for reporting suspicions of HT (human trafficking), as well as hopefully they will get into the hands of someone who is being exploited and to give them a way out,” Fuhr said.

The U.S. National Human Trafficking Hotline, created and staffed by trained people through Polaris Project, received 7,838 contacts in 2018. The lip balms have the message, “Forced to do something you do not want to do? Are you threatened if you try to leave? Do you see a young person being exploited? If so, call (the Human Trafficking Hotline): 1-888-3737 or text Be Free (233733)”

In addition, Free the Black Hills of Human Trafficking purchased banners that are hung throughout the Northern Black Hills during the Sturgis Motorcycle Rally.

“The banners highlight that ‘for some, it’s not a choice’ — helping both victims, potential buyers, and also the public to see the exploitation and coercion involved,” Fuhr explained.

Also distributed are “Red Flag” business-sized cards. Free the Black Hills of Human Trafficking has distributed tens of thousands of them over the past four years, especially at hospitality businesses like campgrounds and hotels/motels, Fuhr said. The cards include a QR code that, when scanned, provides the Human Trafficking Hotline number, for a quick save into phone contacts.

“We are grateful to all the businesses, organizations, and individuals who are willing to educate and protect others by getting involved in some way, by labeling lip balm, distributing the lip balms and awareness materials, buying a raffle ticket, giving donations, praying, or displaying the banners and materials,” Fuhr said. “What great local communities we live in, where we want a safe place for everyone.”