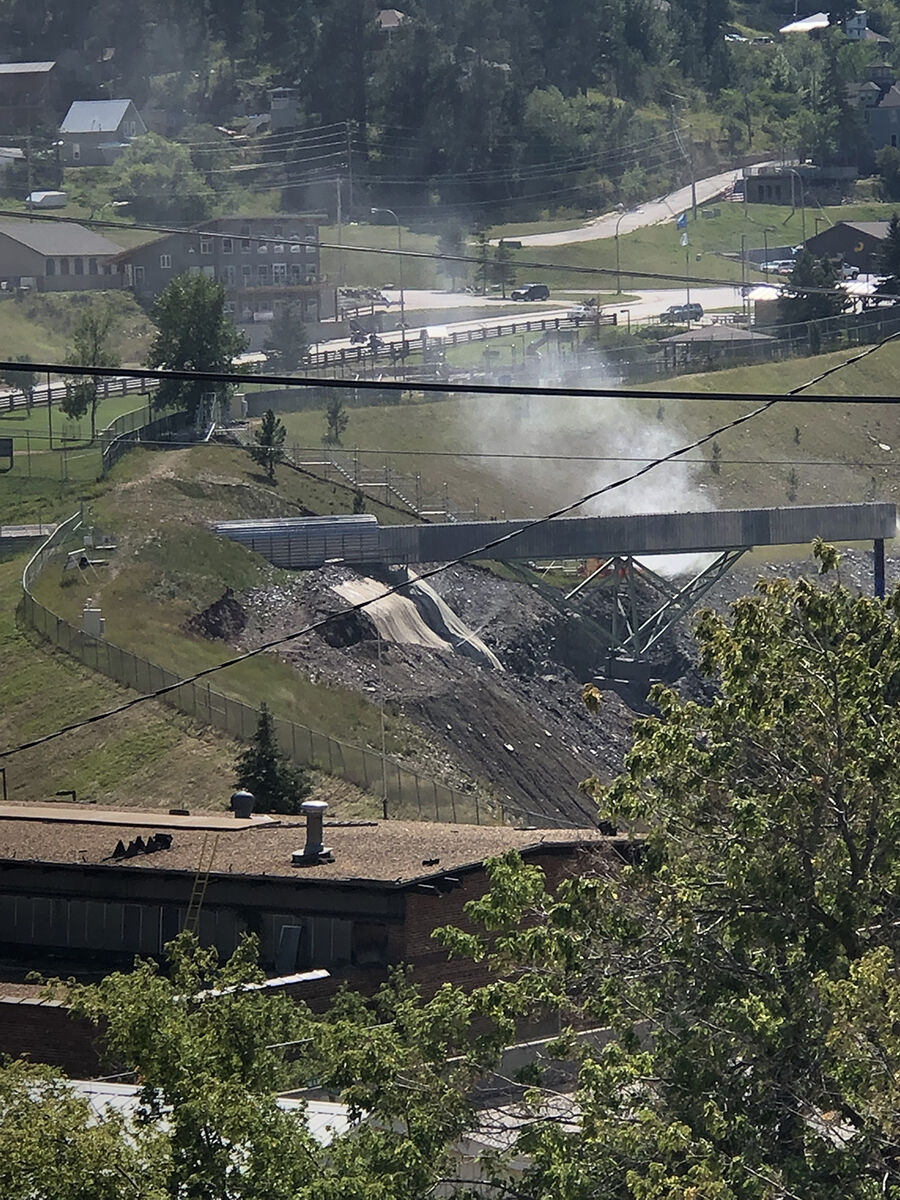 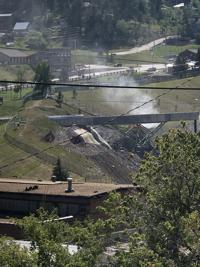 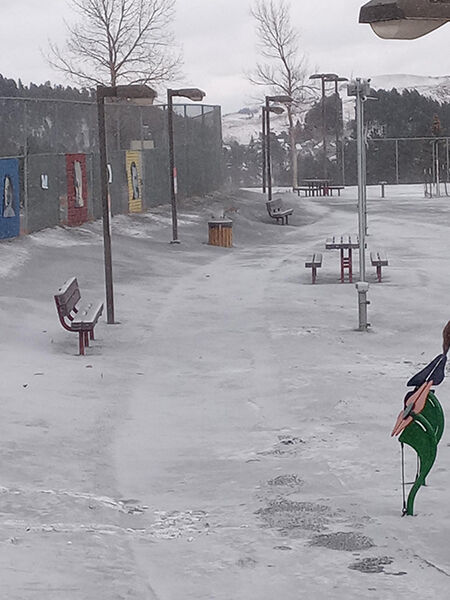 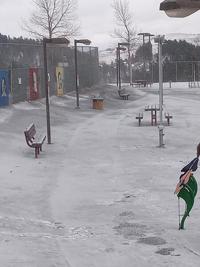 This weekend, high winds blew dust from the Open Cut onto fresh snow giving a stark contrast in how much dirt was being blown out from the Sanford Lab rock dust site. Photo courtesy of Jade McGrane

This weekend, high winds blew dust from the Open Cut onto fresh snow giving a stark contrast in how much dirt was being blown out from the Sanford Lab rock dust site. Photo courtesy of Jade McGrane

LEAD — Lead Mayor Ron Everett has asked the Sanford Lab to stop dumping rock into the Open Cut, until they can solve the dust problem.

For months the Sanford Underground Research Facility and Fermilab crews and contractors have been struggling to contain dust that has been blowing from the Open Cut in large amounts, as local residents have issued multiple complaints to lab and city officials. The dust originates from rock that crews are excavating from the underground laboratory, to make room for the Long Baseline Neutrino Facility and Deep Underground Neutrino Experiment. That rock is crushed and transported along a conveyor belt to the Open Cut, where it is dumped.

On Friday the city listed a dust update from the lab on its agenda for the regular city commission meeting, scheduled for Monday. The day before the meeting, on Sunday, a fresh snow revealed the effects of the black dust that was blown from the Open Cut, as the lab dumped more rock and the wind carried it around town. The black dust settled in Manuel Brothers Park and the surrounding area, creating a black and gray film on the freshly fallen snow — a visual representation of a problem residents have been complaining about for several months.

“We’ve been dealing with this for quite awhile,” Everett said. “Like the citizens have said, we were promised a certain thing. We were promised it wouldn’t have an effect. It obviously is. Some of the effect is from the material that is being dumped immediately. Some of it is from material that has been dumped and the wind moving it again. (This causes) public health concerns, clean-up of businesses and clean-up of our park. We need to invoke our right to say shut it down. I am asking you to shut it down for a week or two until we have all of our answers to questions and know how we are going to clean up the mess. I’m asking you to voluntarily do that.”

Patrick Weber, project manager of the construction project and a representative of Fermilab, which is overseeing the development of the Long Baseline Neutrino Facility, said he would have to check with other people within the project to see if it is possible to temporarily shut down, and promised to get back to Everett with the details Tuesday morning.

Everett asked City Attorney Tim Johns whether the city could force the shut down, but Johns advised the city to give the lab time to coordinate and communicate with the players involved with the construction project.

The exchange came after Weber appeared at the city commission meeting to discuss efforts to mitigate the dust issue.

“We know we’ve had some bad days with the high wind,” Weber said. “That’s not the neighbors we want to be. We are working to address that. It’s been a difficult issue to manage the dust and we’ve tried a lot of things.”

Weber mentioned a fogger that was installed to spray the rock before it is dumped. However, that method did not work because once the rock dried out in the pit, the wind picked it up and spread the dust. He also mentioned a chute at the end that resembles an elephant trunk, but it was not long or robust enough for the abrasive nature of the rock. The crew has since ordered a longer and larger chute that the Lab hopes will dump the rock far enough down into the Open Cut to keep the dust from kicking up.

Recently, Weber said crews have been applying a binding substance to the rock that is intended to bind dust particles together so they do not dry out. The substance, he said, is similar to that which is used to contain dust on gravel roads. The tackifier, he said, is the most promising solution so far.

“If you look at the pile down there you’ll see some parts that are almost black, but on the edges it’s lighter,” he said. “That discoloration is coming from an item we are applying to the rock coming out, called a binder.”

“All the snow in the park and even out into the street, if you look down on it you can see the (dust) particles that are black now,” Everett said. “Was it the tackifier particles blowing, or maybe it was just wet? It was clearly evident, as you looked at the snow, there are layers of dust. Keep working on it as hard as you can, because it is not acceptable. If you go to the park it is all over and we have to deal with that. It’s in our splash pad, in the shelters, it’s out in the grass. We need to also come up with a plan to clean that up.”

Commissioner Kayla Klein asked about the potential health effects such as silicosis, a form of lung disease caused from breathing in silica dust. However, Weber said the lab monitors how much silica is coming out closely and he assured her that there is no health hazard.

“When people worry about small particles causing respiratory issues that is related to small spaces,” he said.

But Jamie Gilcrease, owner of Lotus Up, a coffee shop and café located directly across from the Open Cut, said she has large amounts of dust coming through her building. Gilcrease reported that while she used to change her air filters once every three months, that routine has changed to once every three weeks because of the large amount of dust that has come through her shop.

“It’s coming through my windows and my doors,” she said. “I have black soot all over the inside of my building. The park, I was glad it was shown, because that’s what it looks like in my building. I’ve had three employees who felt dizzy on different occasions. We are in a small, enclosed space and there is a lot of dust coming through. I have been patient and kind and those filters are not cheap and at this time it’s hard to find them. How many things do we need to do before we shut that sucker down so you can figure it out? Nobody has come and asked about what we have seen and how we’ve been feeling.”

Jerry Mertesdorf, parks director for the city of Lead, said he has personally witnessed the wind picking the rock up as it’s falling from the chute, so that it never lands in the Open Cut at all. “How long is this new trunk going to be, and is it going to get it down to where the wind isn’t going to pick it up,” he asked.

Additionally, Mertesdorf asked about whether the tackifier being applied to the rock will kill the grass. “The stuff you put on the road kills the grasses,” he said.

“It is concerning that there are a lot of questions that weren’t able to be answered this evening,” Klein said.

In addition to the dust problems, Dustin Heupel said there were several promises made before the conveyor belt was built, which were never fulfilled. One in particular related to the pads, which the lab said it would wrap around light poles at the basketball courts, to protect people on the sledding hill. During preliminary meetings regarding the conveyor belt construction, Heupel said lab officials promised to provide ski-hill quality pads that would prevent injuries at the bottom of the hill. The pads that were installed are about two inches thick, and don’t provide any protection.

“The pads that got provided are inadequate at best, and that’s putting it nicely,” Heupel said. “At what point is the city going to hold them accountable to some of these things they promised us? We know the Homestake formation is high in silica. When it is coming out of there as thick as it is, and you have kids playing in that park and you have a half inch of that dust on their playground equipment, in a short time of playing on that stuff it’s probably not good for their health. I understand you are working hard, and we appreciate that you are not just blowing it off.”

Mike Headley, executive director of the S.D. Science and Technology Authority, which manages the Sanford Lab, said the lab will purchase the correct pads.

Following the discussion, Weber told Everett that he would report back to him on Tuesday morning with an answer about whether crews could cease dumping operations until the dust issue is settled. The Pioneer did not receive any updates before press time and this is a developing story.