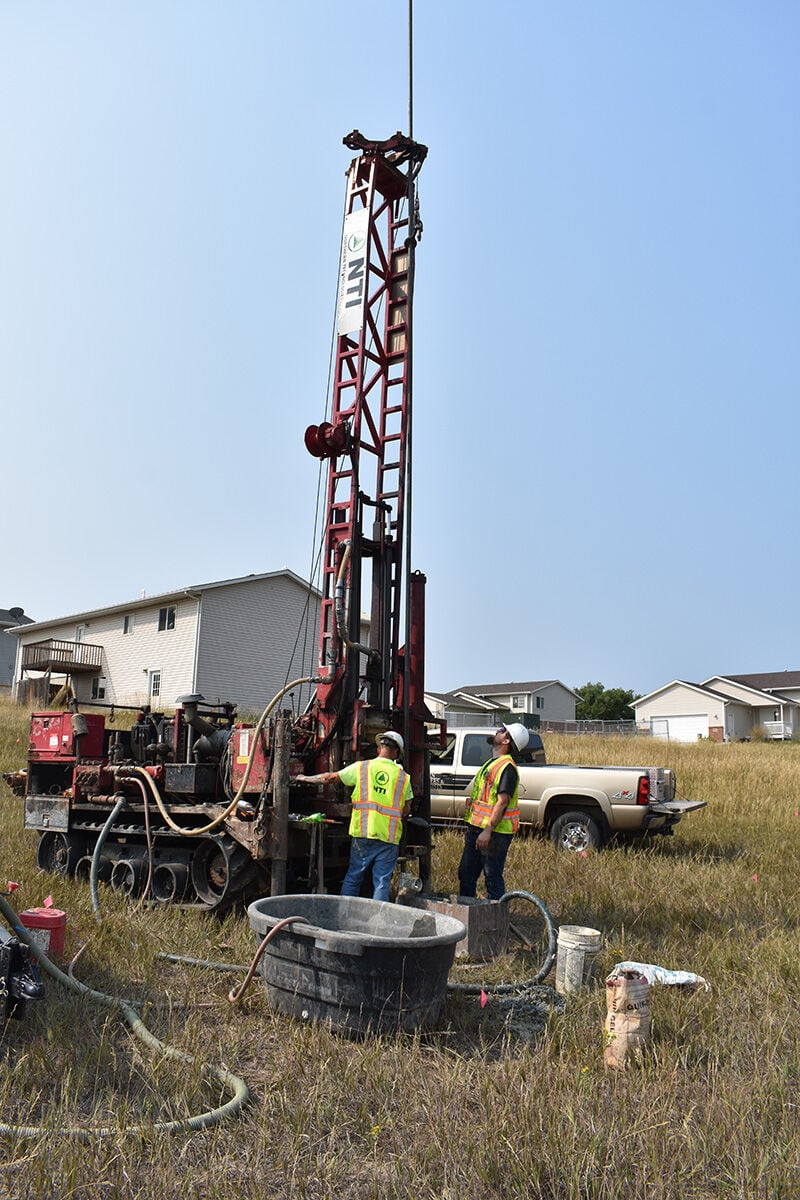 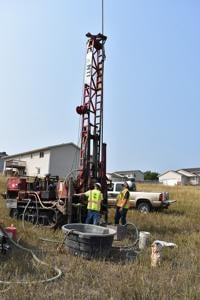 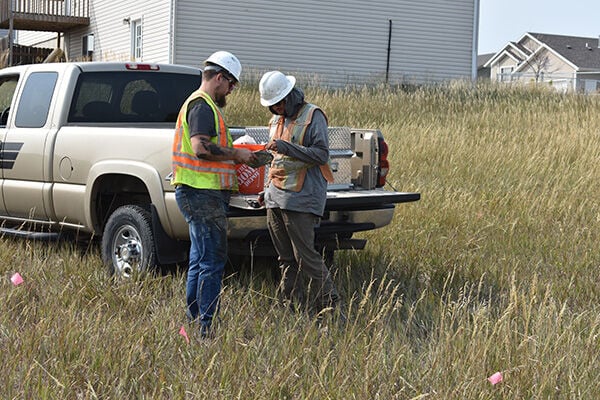 Adam Dando shows some of the core sample soils to an engineer with Western Engineers and Geologists of Rock Springs, Wyo. Pioneer photo by Deb Holland 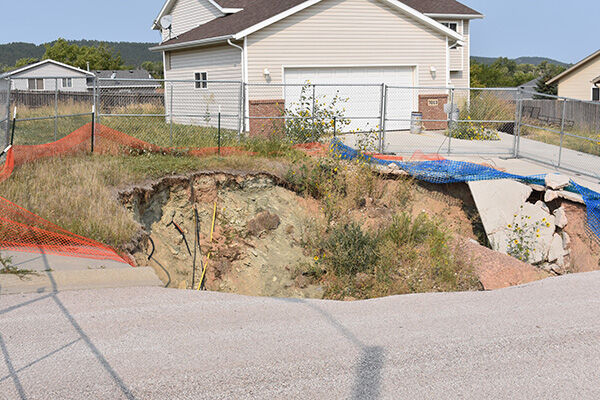 The sink hole, that opened up in April 2020 and caused the evacuation of several homes in the Hideaway Hills subdivision at Black Hawk, continues to grow larger. Pioneer photos by Deb Holland

Adam Dando shows some of the core sample soils to an engineer with Western Engineers and Geologists of Rock Springs, Wyo. Pioneer photo by Deb Holland

The sink hole, that opened up in April 2020 and caused the evacuation of several homes in the Hideaway Hills subdivision at Black Hawk, continues to grow larger. Pioneer photos by Deb Holland

BLACK HAWK — Geologist Nick Anderson says the only definitive way to actual know what is under the surface of the homes in the Hideaway Hills subdivision is to drill underground.

That operation, which began this week, is part of a lawsuit filed on behalf of Hideaway Hills homeowners by Fox Rothschild, a national law firm.

The lawsuit charges that the state failed to properly reclaim the land after it had been used as a gypsum mine. The land was later sold to developers who created the Hideaway Hills subdivision.

“When this area was reclaimed back when the state was working it for the open pit mine in the 80s and 90s, it was only ever reclaimed for pasture use,” Anderson said. “The material they put in was with the idea was that it was going to be grazing land. They sold it to a developer who ended up putting houses on it.”

Fox Rothschild contends that the state removed approximately 8,619 tons of gypsum from the old mine under Hideaway Hills, and a total of 135,227.58 tons of gypsum in total before the mines were closed and the land sold to a developer.

Records show that 275,227.58 tons of soil were disturbed or displaced in Hideaway Hills before it was sold to land developers, said Fox Rothschild lawyer Kathleen Barrow.

“Based on tonnage removed from underground, geologists estimate that the old mine extends substantially beyond the sinkhole evacuation zone and is at least twice the size of the area that can be accessed from the sinkhole,” Barrow said.

A series of sites will be drilled in two phases in the coming weeks to a depth of up to 150 feet, Anderson said. Engineers hope that core samples will provide definitive proof of the extent of underground voids, as well as the integrity of underground mines, pit mines and strip mines that were backfilled with non-native soil when the mine was closed.

The bore holes being drilled are about four inches in diameter. They hopefully will provide answers to key questions about the makeup and extent of the shuttered underground gypsum mine, Anderson said.

Rob Gerrard, of Western Engineers and Geologists of Rock Springs, Wyo., said the first holes dug Monday were in the area where the sinkhole opened up on East Daisy Drive in Black Hawk in April 2020. Because Black Hills cavers went underground, engineers have a rough map of the location of the old gypsum mine.

“What we’re trying to do is determine the extent of this mine. Does it go beyond what we can see right here on the surface?” Gerrard said.

Anderson said he has done extensive research of the Hideaway Hills mines and has not found any historic mining maps.

“If we had that, we could overlay it and know where to start looking,” he said. “The only map that exists is the one that we made from what we could see when we were down there.

Anderson accompanied other Black Hills cavers who went underground when the sinkhole opened up.

“The drilling plan here is two-fold. We’re trying to get a better framework of the mine. We’re also trying to get a better idea of what the sub-surface is made of,” he said. “There used to be a large open-pit mine over here that covered most of this neighborhood, but when they reclaimed it for pasture use, they brought in a bunch of either topsoil or non-native soil to recontour the site.”

Gerrard said they hope to do eight or nine drill holes to find out more about the subsurface.

“This is just kind of preliminary drilling to see where we need to go from here,” he said.

But the holes they do drill will hopefully supply some valuable information, Gerrard said. In addition to soil samples, the engineers read computerized data from the bore holes.

There are several concerns for the engineers relative to the subsurface.

Gypsum being water soluble is just one of the concerns, Anderson said.

“We don’t know how compacted some of that fill material is which is why we are seeing so much settling in houses around here. They were built on material that was not supposed to be built upon,” Anderson said.

The drilling operation got underway just a week after the Fox Rothschild legal team began taking sworn deposition testimony from designated state officials and a former cement plant executive to uncover precisely how the state-operated gypsum mines were shuttered and why the state failed to take action to protect homeowners, Barrow said.

She said the legal team is moving forward to seek class certification in the coming weeks.

“These homeowners deserve answers to some very serious questions,” Barrow said. “What we learn will be used for the benefit of all the residents of Hideaway Hills.”