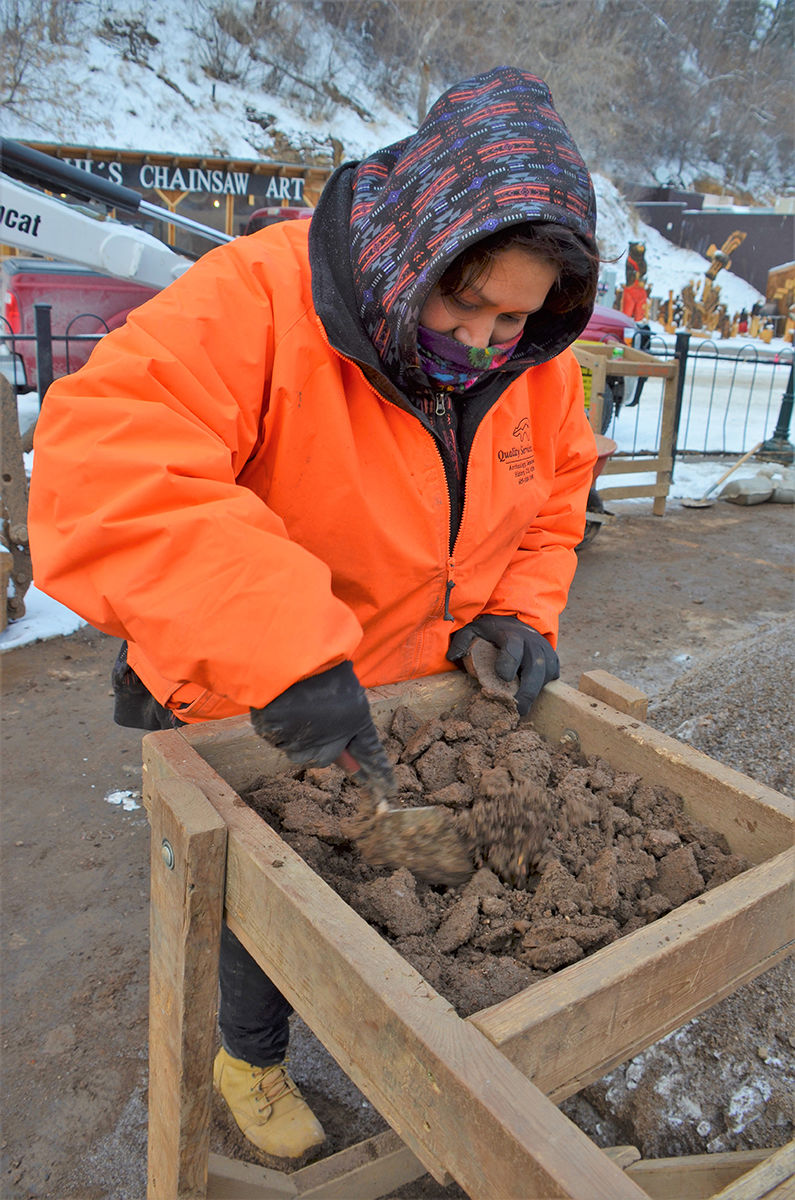 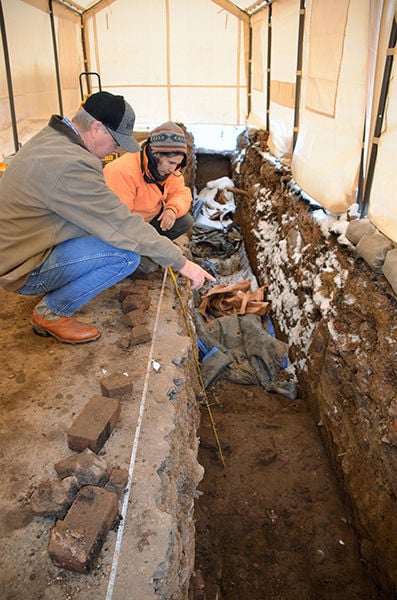 Deadwood Historic Preservation Officer and a Quality Services team member discuss the different strata being encountered in the approximate five-foot-deep trench in the Tin Lizzie parking lot, now the site of an archaeological dig. Pioneer photo by Jaci Conrad Pearson 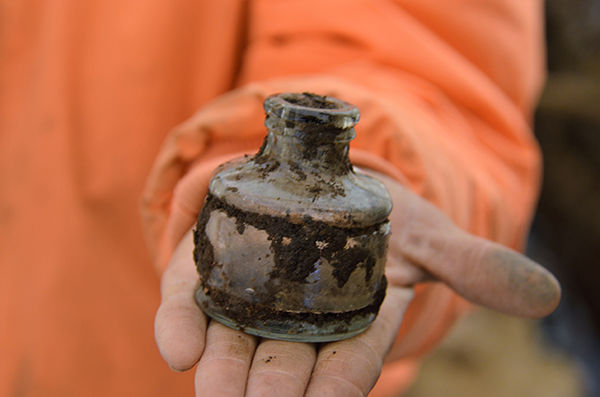 Miraculously, this ink bottle was found intact and with the cork still in at the Tin Lizzie archaeological investigation site. Pioneer photo by Jaci Conrad Pearson

Deadwood Historic Preservation Officer and a Quality Services team member discuss the different strata being encountered in the approximate five-foot-deep trench in the Tin Lizzie parking lot, now the site of an archaeological dig. Pioneer photo by Jaci Conrad Pearson

Miraculously, this ink bottle was found intact and with the cork still in at the Tin Lizzie archaeological investigation site. Pioneer photo by Jaci Conrad Pearson

Kuchenbecker said it’s not surprising at all how many items have been found.

“We fully anticipated a plethora of artifacts,” Kuchenbecker said.

The dig is required by Deadwood city ordinance prior to construction of a new Four Points by Sheraton: a Marriott hotel on the Tin Lizzie Gaming property.

“It’s a requirement for new construction,” Kuchenbecker said. “Tin Lizzie’s is in the process of putting a new hotel on that site and a requirement of new development within Deadwood is archaeological investigation.”

The city of Deadwood recently approved a $3.1 million TIF as part of an expansion project on the Tin Lizzie gaming complex, estimated to be a $17 million project completed sometime in 2022.

The cost of the archeological dig is approximately $500,000 and is borne by the developer through the TIF.

“The city is responsible for oversight and there is an agreement with the developer that the artifacts will be the ownership of the city,” Kuchenbecker. “This will supplement the 2001-2004 Chinatown excavation and further provide us an understanding of Deadwood’s history.”

The site of the property the archaeological dig is occurring on is across the street from the 2001-2004 archaeological investigation that uncovered over 250,000 artifacts from 1876 to the 1950s that helped historians better understand the impacts, significance, and day-to-day life of Chinatown and that area of Main Street.

The dig site is located in the parking lot of Tin Lizzie in Chinatown.

“Not all of this has been opened up yet, but there will be 17 individual test pits, ranging in size from one to two meters square,” Kuchenbecker said. “And then a trench that is 40 meters in length. The trench is crossing the site to identify features and artifacts that we believe are still in existence, based on historic photographs and Sanborn Fire Insurance maps of the day, as well as mineral surveys. So we had a general idea of what was there and this trench helps us just cut through that lot to fully understand what was there and with the artifacts, we can use that for diagnostic information to date different layers and strata, or the stratigraphy. The test pits are going where there will be drilled piers for the construction of the hotel.”

Kuchenbecker said the time frame on this archaeological investigation would be a little bit different than others.

The investigation began in late-October, early-November.

“The archaeological firm has indicated it would take between two and three months,” Kuchenbecker said.

The area of the dig site has housed several historically significant venues in the past, including: several Chinese dwellings and gambling houses, liveries, blacksmith, and boarding houses.

“We’ve found evidence of what appears to be early Deadwood history, from 1876 forward, with the layers including what appears to be the 1879 fire, 1883 flood, and, then, a variety of other buildings within that,” Kuchenbecker said. “So, the very founding of Deadwood, forward.”

This phase of the development will add a new 107-room hotel, planned for construction over the parking lot located southwest of the Tin Lizzie casino.

The new addition will be a four-story building that will be similar in height to the existing adjacent buildings. The hotel will be constructed on a platform placed over the existing parking lot to maintain as off-street parking. The hotel will be three stories with the lobby located on the second level. The project is expected to be completed by spring 2022.