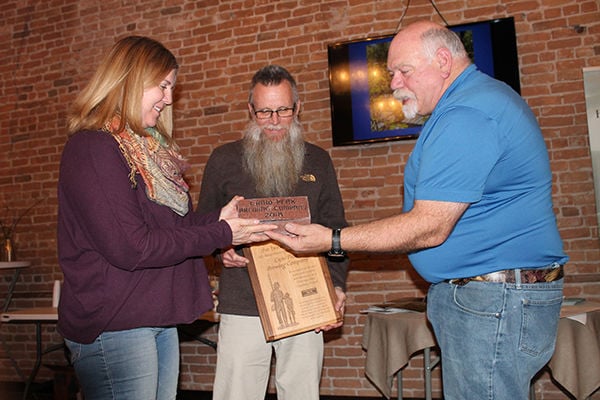 Crow Peak Brewing Company was honored as a 2018 Distinguished Hatchery Friend Thursday at the Booth Society, Inc.’s Winter Mixer. Owners Carolyn Ferrell and Jeff Drumm accepted the plaque and brick, which will be installed in a walkway at the hatchery, from Steve Shuck, right, president of the Booth Society board. Pioneer photo by Kaija Swisher 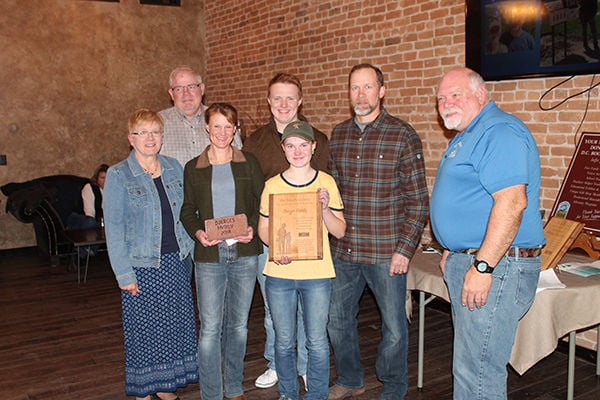 Three generations of the Doerges family were honored as 2018 Distinguished Hatchery Friends. From left are Carol, Joe, Heather, Tim, Jane, and Kyle Doerges, with Steve Shuck, president of the Booth Society board. Pioneer photo by Kaija Swisher

Crow Peak Brewing Company was honored as a 2018 Distinguished Hatchery Friend Thursday at the Booth Society, Inc.’s Winter Mixer. Owners Carolyn Ferrell and Jeff Drumm accepted the plaque and brick, which will be installed in a walkway at the hatchery, from Steve Shuck, right, president of the Booth Society board. Pioneer photo by Kaija Swisher

Three generations of the Doerges family were honored as 2018 Distinguished Hatchery Friends. From left are Carol, Joe, Heather, Tim, Jane, and Kyle Doerges, with Steve Shuck, president of the Booth Society board. Pioneer photo by Kaija Swisher

SPEARFISH — For their dedicated support and advocacy of the D.C. Historic National Fish Hatchery and Archives in Spearfish, Crow Peak Brewing Company and the Doerges family were honored as the 2018 Distinguished Hatchery Friends Thursday at the Booth Society, Inc.’s Winter Mixer.

“By all definitions, Crow Peak Brewing Company is a community supporter, and it’s a company truly woven into the fabric of Spearfish,” Steve Shuck, president of the Booth Society board, the nonprofit friends group that supports the hatchery, described of the first honoree. “It seems that weekly, or maybe more, they’re hosting a community event for an organization or donating beer to the community fundraising events throughout Spearfish, and the Booth Society is no exception to that. They generously support the Booth Society, and they’ve done so since they’ve been in business (about 12 years). Whenever the Booth Society has asked for donations from Crow Peak, they have always, without question, given.”

He thanked the company for all of its support of the hatchery, the Booth Society, and the community.

“Crow Peak Brewing has always been ready to help with community events and projects. We appreciate the support and sponsorships they provide to the events connected with the hatchery,” Shuck said as he presented Crow Peak Brewing Company owners Carolyn Ferrell and Jeff Drumm a plaque and brick, which will be installed in a walkway at the hatchery.

The second 2018 Distinguished Hatchery Friends recognition was presented to the Doerges family, including Joe and Carol Doerges; their son Kyle, and his wife, Heather; and their children, Tim and Jane Doerges.

“For not one, but for three generations of the Doerges family, the D.C. Booth Historic National Fish Hatchery has been a very special place,” Shuck said, describing that the visits started when Heather Doerges used to push the children in the stroller during her daily jogs. “Their kids are now in their teenage years, and they still frequently visit and volunteer at the hatchery.”

Shuck described that Tim and Jane Doerges both participated for all three years of middle school in the youth volunteer program for middle school students, Hatchery Helpers. Now in high school, they continue to volunteer at the hatchery, he added, describing that Jane Doerges enjoys fish work and aquatic plant removal, and Tim Doerges helps with a variety of tasks including cleaning raceways, cleaning leaves from the grates, and other maintenance tasks. When not helping with the volunteer tasks, Jane Doerges loves to bird watch on hatchery grounds, and Tim Doerges enjoys the nature trails and playing Pokémon Go throughout the facility.

“It doesn’t stop with the kids. Both their parents, Kyle and Heather, are also active volunteers,” Shuck said. Kyle Doerges built the Little Free Library in front of the administration building that’s a replica of a historic hatchery building, and he also built frames for some of the new outdoor interpretive signs, Shuck said, adding that Heather Doerges helps with many gardens, and both lend a hand by helping with special events, office work, the gift shop, and other behind-the-scenes tasks.

“Grandparents Carol and Joe also volunteer,” Shuck said, describing that Joe Doerges helps with special events and IT. Carol Doerges has done data entry work at the gift shop for inventory and helps in the gardens, too.

Shuck quoted Carol Doerges: “‘We love coming here to volunteer, to visit and relax, and it’s great for the grandkids. They feel ownership and pride for the facility.’”

After the three generations accepted the plaque and brick, Heather Doerges took a moment to speak.

“I know we’re here because you’re wanting to recognize and thank us for what we have done for the hatchery, but I feel like it’s backwards, and it should be just the opposite: We should be thanking you,” she said, describing that what D.C. Booth means to the family is more than most people know. She said that it was a “launching point” for her children and has helped shape them into the individuals they are today.

The hatchery provided their first experience with nature, before they could even walk, Heather Doerges said, describing that the daily visits eventually inspired science fair projects and participation in Hatchery Helpers.

“… now I have two amazing young scientists, and it was where they both learned the importance of volunteering and showing them what giving your time to something does,” she said.

Heather Doerges added that their experiences at the hatchery also taught her children the value of conservation and environment and that her son, a senior in high school, is thinking of becoming an environmental engineer.

Most importantly, though, Heather Doerges said, their experiences at the hatchery showed them the value of community and of friendship.

“You’d do anything for a friend that needs you, and D.C. Booth, you are our friends,” she said.

In addition to the Distinguished Hatchery Friends recognitions, Shuck thanked the hatchery staff for their work, encouraged people to contact their Congressional representatives to end the partial government shutdown so the hatchery, currently closed due to said shutdown, could reopen, and thanked the volunteers and community for supporting the society and hatchery.

“It’s fun to be able to do this, where we can say thank you to the community for all the support that you give us over the years … It’s been a very successful year. We couldn’t do what we do without our volunteers,” he said.

Shuck also encouraged people to visit dcboothfishhatchery.org, which has recently been updated through a new platform.