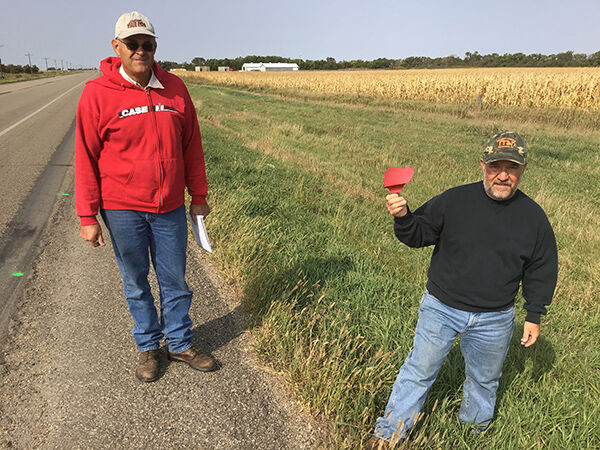 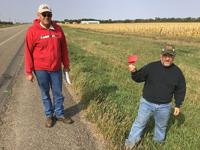 On Thursday, while inspecting the accident scene, Victor Nemec discovered a piece of red plastic from a vehicle — possibly the red 2011 Ford Taurus driven by South Dakota Attorney General Jason Ravnsborg in the Sept. 12 crash that killed Joe Boever. The fragment was in the north ditch near where the fatal incident occurred. Photo courtesy of Tom Lawrence 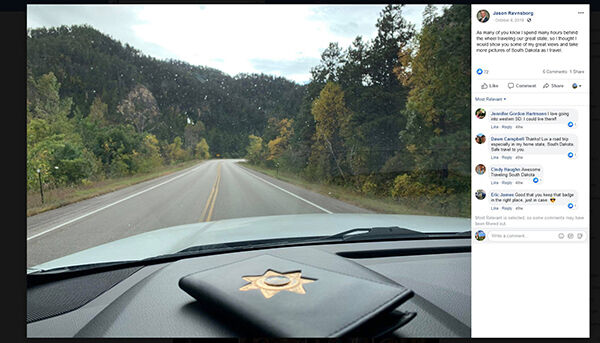 This image, posted to the Facebook page of South Dakota Attorney General Jason Ravnsborg on Oct. 8, 2019, appears to have been taken by Ravnsborg while he was driving. In the post, Ravnsborg wrote: “I spend many hours behind the wheel traveling our great state, so I thought I would show you some of my great views and take more pictures of South Dakota as I travel.” Photo: Facebook

On Thursday, while inspecting the accident scene, Victor Nemec discovered a piece of red plastic from a vehicle — possibly the red 2011 Ford Taurus driven by South Dakota Attorney General Jason Ravnsborg in the Sept. 12 crash that killed Joe Boever. The fragment was in the north ditch near where the fatal incident occurred. Photo courtesy of Tom Lawrence

This image, posted to the Facebook page of South Dakota Attorney General Jason Ravnsborg on Oct. 8, 2019, appears to have been taken by Ravnsborg while he was driving. In the post, Ravnsborg wrote: “I spend many hours behind the wheel traveling our great state, so I thought I would show you some of my great views and take more pictures of South Dakota as I travel.” Photo: Facebook

An experienced traffic-accident reconstruction expert is casting doubt on the claim made by South Dakota Attorney General Jason Ravnsborg that he thought he hit a deer with his car the night of Sept. 12 when in fact he had struck and killed a man.

Kurt Weiss is a mechanical engineer who has 34 years of experience in reconstructing hundreds of car accidents and is the owner of Case Study Collision Science, a California forensic research firm. Weiss is accredited by the Accreditation Commission for Traffic Accident Reconstruction and has worked on cases for government agencies and clients in civil and criminal trials.

After viewing an image of the site where Ravnsborg hit and killed 55-year-old Joseph Boever, reading articles about the incident and viewing a photo of Ravsnborg’s vehicle taken after the crash, Weiss said it is highly improbable that Ravnsborg would not have known he’d hit a man unless he was distracted and not looking at the road at the time of the collision.

Ravnsborg struck and killed Boever at 10:30 p.m. on Sept. 12 on U.S. Highway 14 just west of Highmore, S.D. on his way back from a political event in Redfield.

“If he (Ravnsborg) is looking forward and had the headlights on, it would be easy to discern if it’s someone’s jeans and a flannel (shirt) versus a beige-colored deer,” Weiss told News Watch in an interview. “But if he’s looking down or to the left and he blasts something, you might not know what you hit. But how could he not; look at the hole in the windshield.”

An investigation involving South Dakota, North Dakota, Minnesota, and Wyoming organizations is currently underway. Gov. Kristi Noem said she would release the report upon its completion as well as other evidence.

Weiss said that even at a high speed and on a dark night, Ravnsborg likely would have known he did not hit a deer if he had been driving without distraction.

Weiss and another accident-reconstruction expert interviewed by News Watch said it will be difficult but certainly possible for investigators to determine how and where on or off the roadway the collision between Ravnsborg’s car and Boever took place. Information from the road, debris at the site, overhead images taken by drone cameras, tire or skid marks on the roadway, and details from the car and its internal information systems can all be used to determine what happened that night, they said.

The second reconstruction expert interviewed by News Watch, John Desch of John Desch Associates of New Jersey, said that if the investigation reveals that Ravnsborg struck Boever on the road shoulder and not in the travel lane, then Ravnsborg would have more culpability in Boever’s death.

“That would be clear negligence on the part of the driver,” Desch said. “If a pedestrian is walking on the shoulder, there is some kind of reliance on their part that they’re in a safer area.”

Weiss further said that the broken windshield of Ravnsborg’s 2011 Ford Taurus would likely have contained clothing fibers, human skin or hair that could have indicated to Ravnsborg or Hyde County Sheriff Mike Volek that Ravnsborg had hit a person and not a deer. Likewise, a deer likely would have left hair, hide or bone fragments in the broken windshield or on the front of the car to indicate an animal was struck.

“A jagged glass edge is going to catch some fibers, and for me, as an experienced reconstructionist, if you look at the glass edge, you know the difference between a human and a deer,” Weiss said. “It would be very apparent.”

Weiss examined a photo of Ravnsborg’s crashed vehicle posted by KELO news; the red Ford Taurus with a smashed windshield was also seen at a highway maintenance facility in Highmore by Nick Nemec, a cousin of Boever, when he was at the accident scene in the days following the collision.

Investigators from the South Dakota Highway Patrol and the state of North Dakota are investigating the accident.

Ravnsborg, a 44-year-old Republican, released a statement two days after the accident saying that on the night of the collision he thought he had struck a deer, that he stopped his car and that he called Sheriff Volek and that the two looked but could not find evidence of what Ravnsborg had struck. Ravnsborg said that because his car was damaged, Volek loaned him his own car to drive back to Pierre, where Ravnsborg lives.

The next morning, returning in two vehicles to Highmore with his chief of staff, Tim Bormann, Ravnsborg said he and and Bormann stopped at the accident site to look around and discovered Boever’s body in the ditch. He said they then drove to Volek’s house and the formal investigation began.

Ravnsborg, who has several past speeding tickets, said he had not been drinking alcohol the night of the accident. The attorney general said he would not answer any further questions until the investigation is complete.

Department of Public Safety spokesperson Tony Mangan told News Watch that the state has hired John Daily of Jackson Hole Scientific Investigations, Inc., of Jackson Hole, Wyo., to reconstruct the accident. Daily has a mechanical engineering degree and spent 25 years as a law enforcement officer; his website said he has investigated more than 1,000 accidents.

Desch said that if Boever was wearing dark clothing and walking in the traffic lane, it is possible that Ravnsborg could have struck him and not known that he hit a person.

A car traveling 65 mph is covering about 100 feet per second, so there isn’t much time for a driver to recognize an object that suddenly illuminates in the headlights, Desch said.

But if the evidence shows that Boever was on the highway shoulder or in the ditch when struck, then “that’s a whole different matter and then you begin to look at distractions,” Desch said.

Desch said the culpability of Ravnsborg increases if Boever was on the shoulder when struck, especially since Ravnsborg would have heard the loud sounds from the “rumble strips” cut into the pavement just off the travel lane likely would have looked up.

Weiss said a low-profile vehicle such as a Ford Taurus would tend to sweep a person or a deer onto the hood and into the windshield, which should have made it easier to identify what object was struck.

According to manufacturer information, the 2011 Ford Taurus is equipped an air-bag control module that can show both pre-crash and crash data, including speed, engine RPM, brake and throttle application levels, rate of deceleration, and when safety measures such as air bags and seat belt tensioners deployed.

A pair of black tire tracks are still clearly visible on the pavement in the westbound lane of U.S. 14 at the accident scene just outside of Highmore. The tire marks are heading off the roadway to the right; the right tire mark first appears on the paved shoulder of the road.

The tire tracks are dotted with evenly spaced splotches of green spray paint made by investigators. The tracks start a little more than half a mile from the U.S. 14 intersection with state Highway 47 and about 280 feet west of a 65 mph speed-limit sign that marks the end of a reduced-speed zone through Highmore.

The green paint near the tire tracks appeared on Sunday, Sept. 13, when crash investigators were swarming the highway, said Nick Nemec, a former state lawmaker. Nemec and his brother, Victor, have walked the scene of the collision that killed their cousin at least once a day since identifying his body because they want to understand what happened and are not getting information from state officials.

The Nemecs said they do have serious doubts about the story Ravnsborg has told the public and wonder whether an alert driver could mistake a man for a deer, even on an unlit stretch of highway.

Three key questions the reconstruction expert will try to answer are whether Ravnsborg was distracted while driving, if he was traveling above the speed limit when Boever was struck and where Boever was standing or walking when he was hit.

Desch said that since the collision occurred at 10:30 p.m., it is also possible that Ravnsborg fell asleep behind the wheel.

Weiss said it is difficult to anticipate how long a reconstruction may take, and the length can depend on the complexity of the case, Weiss said.