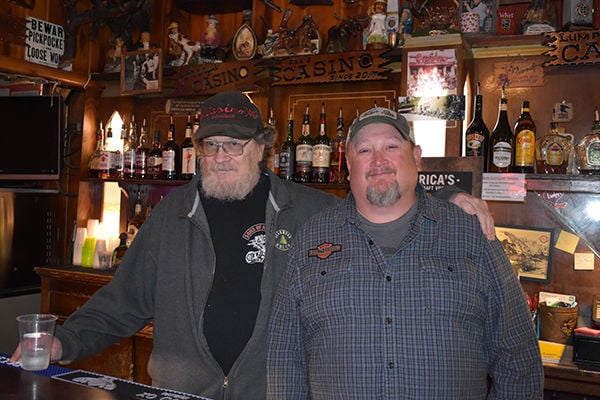 Donald “Duck” Haltiner, left, and Justin “Lumpy” Mattson pose behind the bar at Lumpy’s Casino Bar in Central City. Duck has been a bartender at the Casino for 50 years, and Mattson recently purchased the business that has been part of his family’s history for generations. Pioneer photo by Wendy Pitlick 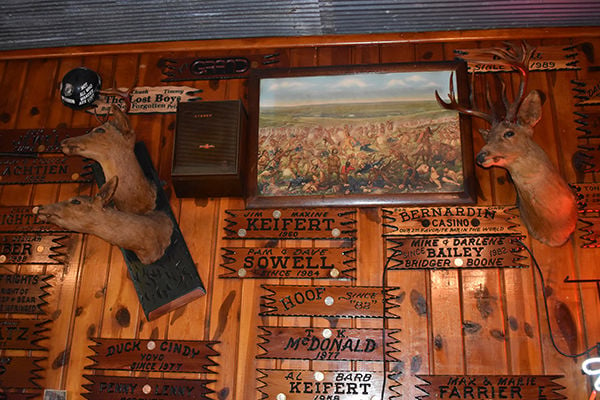 The Casino Bar Hall of Fame plaques adorn the walls of the bar. Patrons have purchased the plaques with messages, dates and names that go back as far as 1910. Pioneer photo by Wendy Pitlick 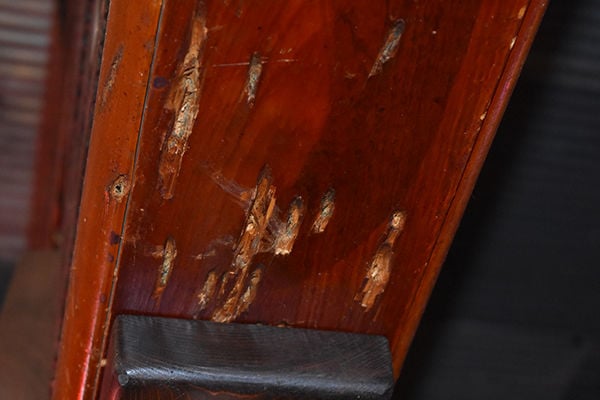 More than a half dozen bullet holes are part of the Casino Bar history from a time when bar owner John Daniels fired warning shots for a tourist, who was trying to steal silver dollars out of the bar. Pioneer photo by Wendy Pitlick

Donald “Duck” Haltiner, left, and Justin “Lumpy” Mattson pose behind the bar at Lumpy’s Casino Bar in Central City. Duck has been a bartender at the Casino for 50 years, and Mattson recently purchased the business that has been part of his family’s history for generations. Pioneer photo by Wendy Pitlick

The Casino Bar Hall of Fame plaques adorn the walls of the bar. Patrons have purchased the plaques with messages, dates and names that go back as far as 1910. Pioneer photo by Wendy Pitlick

More than a half dozen bullet holes are part of the Casino Bar history from a time when bar owner John Daniels fired warning shots for a tourist, who was trying to steal silver dollars out of the bar. Pioneer photo by Wendy Pitlick

LEAD — For more than 130 years the Casino Bar in Central City has been the place where everybody knows your name.

Much like the famed television sitcom “Cheers,” the bar has been known for over a century as the place where locals can wind down from a long day at work, where they can always find friends, and possibly get into a fight or two. For at least 50 of those years it has also been the place where locals can count on learning a new joke, thanks to longtime bartender Donald “Duck” Haltiner.

“I should have been a doctor,” Haltiner said of his 50-year tenure at the bar, which came to a close when he retired in April. “I had a lot of patients.”

For locals familiar with the Casino Bar, Duck has been synonymous with sharing good times. For Duck, the bar has always been part of his life. From his days of going to the bar to pick up a bucket of beer for his miner dad and bringing it home to his house at the old train depot, to running the football pool with more than 90 participants, his connection with the bar and its patrons has been long standing.

“You’ve heard that song “My Bucket’s Got a Hole In It,” by Hank Williams? That was because people would send their kid up to get a bucket full of beer and take it home.”

Originally established in 1888, the Casino Bar quickly established itself as the main watering hole of the booming mining town that was once even bigger than Lead and Deadwood. It has always been called the Casino Bar in one way or another, which new owner Justin “Lumpy” Mattson said is interesting, since the bar has never been a full fledged, legal gambling establishment.

“It’s the farthest away from a casino there is,” he said. “They played cards here back in the day.”

Duck said in the late ‘70s owner Chuck Charles ran a blackjack table in the back, despite warnings from the sheriff to shut the illegal gaming down.

Throughout its tenure, the bar has had multiple owners. But many of Duck’s stories come from the 30-year period when the late John Daniels was the owner, and when 967 silver dollars adorned the bar top.

“What they did is they drilled holes to size, and they froze the dollars to put them in, and they stuck when they expanded of course,” Duck said. “There was nothing over the top, no covering or anything on them. So, as the years wore on they were wearing down. Some tourist came in with a pocket knife and tried to take out one of those silver dollars. Johnny always kept a pistol over the bar, and so he shot over his head a half a dozen times. Those bullet holes are still out here. He threw him the silver dollar, and said get out of here and don’t come back!”

The bullet holes can still be seen on the threshold between the main bar area and the video lottery section of the bar.

A much more intentional bar decoration can be found in the hundreds of plaques that adorn the walls of the bar. Possibly dating as far back as 1910, Mattson said bar patrons have been able to purchase a wooden plaque with their name and whatever date they wanted to commemorate on the bar walls. During Daniels’ ownership tenure, those plaques also included a silver dollar until many of the originals were replaced with Eisenhower coins.

“Some of them put the date they turned 21, or their birthday or when they came out to this part of the country,” Mattson said. “Most of them had a real silver dollar in it. But when (John Daniels) took the dollars out of the bar top, they took them all out from the signs.”

Though the Casino Bar is known today as a friendly place where Wharf employees, Sanford Lab personnel, and Deadwood casino workers come to wind down in a quiet atmosphere, Duck said the bar once carried a very different reputation.

“It used to be a really rough bar,” Duck said. “I had a lot of friends, and I would say “let’s go to the Casino’ and they didn’t want to go there because of the fights. It was a rough place in the 1950s. Of course, you had the miners and the loggers and they didn’t seem to get along too well. A fight would break out and there might be 10 to 12 people involved in the fight. It would start because someone was down here with somebody’s wife, and (husband) was on night shift at Homestake. The (husband) would get off early and come in and here’s his wife drinking with somebody else. A friend of his, probably. A fight would bust out. You never called the cops in those days. When it was over, the ones who started it were usually buying each other drinks. It was a Wild West thing.

“The last fight I remember is Spanky was kind of a little guy and Mike was a pretty good size,” Duck continued. “They got into it because Spanky spit into his face. We got it broken up, but Mike was on top of him and beating him up.”

Mattson said things have calmed down considerably. “That doesn’t really happen anymore here,” he said. “This is more of a locals bar. They park right out front and if they want to get a taxi home, they can leave their vehicle here and not have anything to worry about. Basically it’s a working man’s bar. We have the miners from Wharf and the people from the lab and Kiewit, teachers, and people who work in downtown Deadwood. We have Terry Peakers and construction workers. Everybody who works in the community.”

“When Johnny Daniels owned the place — he was under George Patton on D-Day,” Duck said. “He got his leg shot up, and so he always walked with a limp. When D-Day came around if you came in this bar and you wanted a shot, he would give you a shot for free. You didn’t get to order the shot, he would just grab a bottle and you would drink what he gave you. The drinks were free, and he’d be so drunk by 3 or 4 in the afternoon that he shouldn’t have been tending bar.”

Mattson said Henry Rosenkranz, who was his great-grandfather, six times removed, was one of the original bar owners. Rosenkranz was the first brewer in the Central City area, selling his beer throughout the Northern Hills. He soon abandoned the brewery business and began operating at least 14 saloons in Deadwood, and 47 bars across the state. Mattson’s great-grandmother was charged with making ham and turkey to feed the patrons of the Casino Bar every year for Thanksgiving. It was a tradition that Duck’s girlfriend brought back for several years, and one that Mattson said he plans to continue.

Overall, the stories continue to be told and the memories continue to be made around the rich history of the Casino Bar. Families gather in the back room for games and entertainment, while workers enjoy peace at the bar surrounded by bar artifacts that their families left behind. Mattson said on July 25 he will pay tribute to a piece of that history, when he throws a retirement party for Duck. All bar patrons are invited for burgers, hot dogs, and the chance to swap stories, jokes and tall tales that stem from more than 130 years of good times.