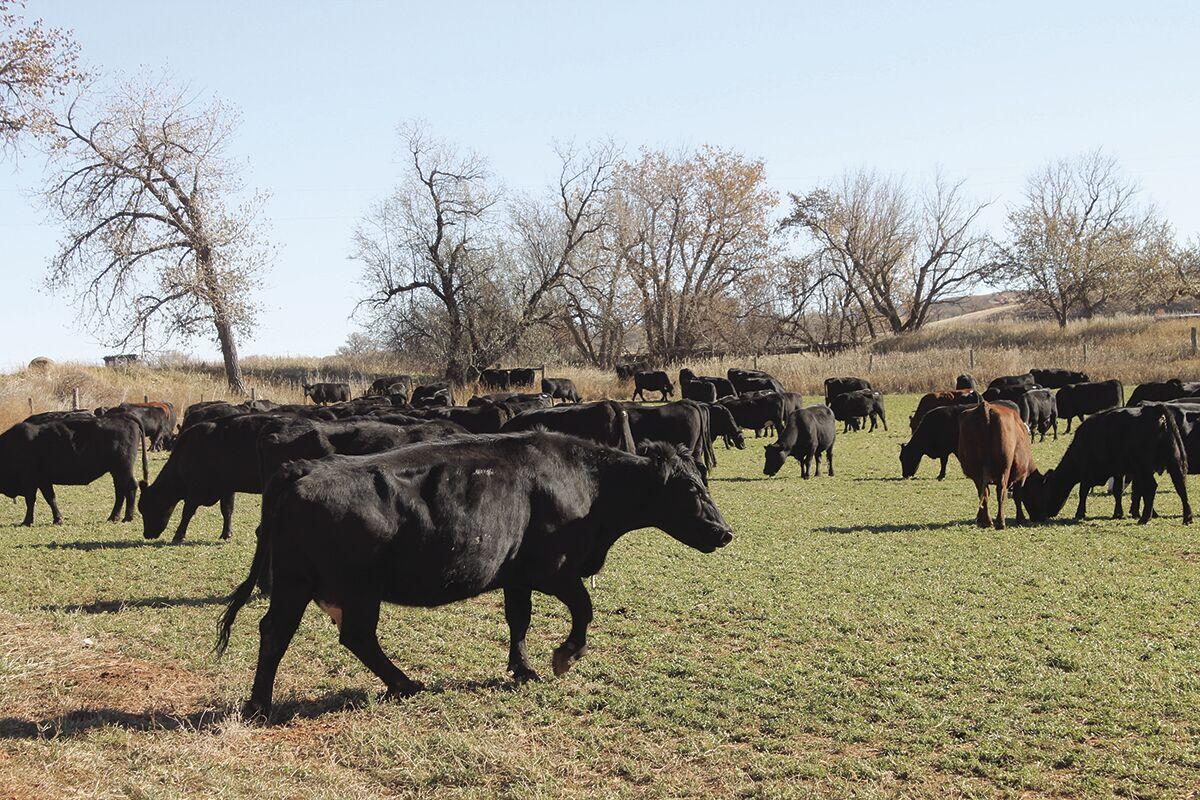 Thompson’s cows could be coming directly to a home near you through his new consumer direct sales venture, West Dakota Beef Company. Pioneer photo by Alex Portal 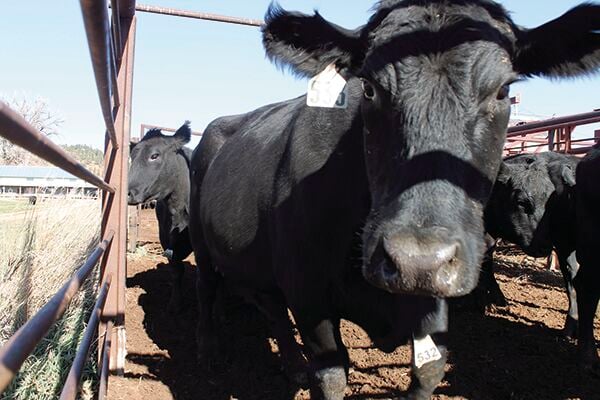 Meet your meat, local rancher Aaron Thompson is looking to free himself and his ranch from the iniquitous beef cattle market. Pioneer photos by Alex Portal 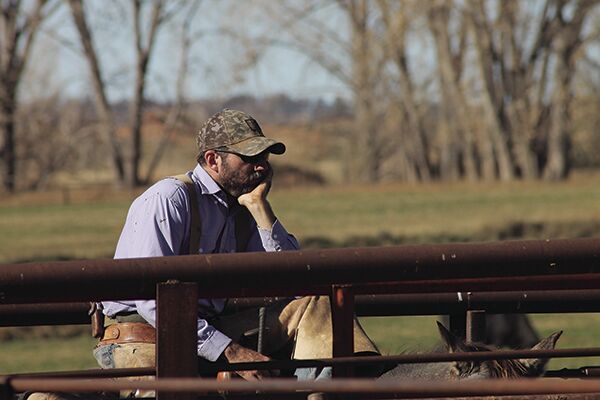 Weary of being a cog in the cattle market machine and suffering miniscule profit margins, Thompson looks to a future of fiscally fruitful free enterprise. Pioneer photo by Alex Portal

Thompson’s cows could be coming directly to a home near you through his new consumer direct sales venture, West Dakota Beef Company. Pioneer photo by Alex Portal

Meet your meat, local rancher Aaron Thompson is looking to free himself and his ranch from the iniquitous beef cattle market. Pioneer photos by Alex Portal

Weary of being a cog in the cattle market machine and suffering miniscule profit margins, Thompson looks to a future of fiscally fruitful free enterprise. Pioneer photo by Alex Portal

SPEARFISH — The cattle industry has played as major a role in the history of the Black Hills since the Gold Rush of 1876, and it continues to shape the region’s history to this day.

Aaron Thompson is one Black Hills rancher keeping that history alive by managing the same land his family has worked since 1888.

There are a few different avenues ranchers like Thompson can take to sell their animals, but by and large there is a common chain used for the market.

“So the chain is, I will calve out a cow. I’ll raise that calf to 600 pounds. I will sell it,” Thompson explained. “Typically those calves are going to go into a feedlot scenario and those feedlots take that animal to about 1,400 pounds and then sell them into the live market or direct to the packers.”

Typically, Thompson will sell his calves, born at the beginning of the year, at a sale barn. Feedlot operators look to purchase calves that are most likely to reach a target weight in the shortest amount of time, with as little additional investment as possible, traits Thompson takes great pains to cultivate in his herd.

“We’ve tried to develop a herd that might be a little better meat quality and kind of have a reputation as coming in as a heavier set of calves. Whether or not this makes us any additional revenue, I’m not sure, that’s the open debate, but that’s what we’re doing,” he said.

Thompson said the way the beef cattle market is set is an extremely complicated methodology, which can make even the savviest ranchers, ingrained with generations of experience spin their wheels. Basically, as Thompson explained it, representatives from the United States Department of Agriculture attend cattle sales at sale barns all across the country to see what price the average size calves are being sold for. That information is processed and delivered to market readers who set the prices at which ranchers like Thompson can sell their calves.

“That’s called the cash settled commodity index price. … Which is kind of asinine because that board is actually a snapshot of the past,” Thompson explained. “It’s a wildly complicated process. The cattle complex is, well it’s certainly beyond my comprehension.”

The “cattle complex” Thompson described operates something like a pyramid, as the market moves from each level of the chain; from rancher to feedlot, to packer, to retail, the number of players shrinks in each level.

The problem producers like Thompson face is a flooded market at their level of the pyramid. On any given day at the sale barn Thompson said there could be upwards of 8,000 head of calves being sold, that makes the merchandise he’s trying to move all the less in demand.

“Even if they’re the most special calves on the planet, they’re still not all that special because there’s literally 100,000 head of calves that sold that day nationally,” Thompson said.

That kind of market overflow makes the cattle market, very much a buyers market.

“So you’ve got all these tiny, tiny producers with no market power, selling cattle into a machine that essentially, at the top of it, there’s five or six people,” Thompson explained.

The players at the top of the pyramid represent the meatpacking and retail end of the market, which Thompson said, also has the highest concentration of profits.

“Somewhere between when that cow leaves the feed lot and when it hits the meat case at the grocery store, there is $2,000 of value that evaporates into the packers and the retail chain’s pockets,” he said.

With less competition at the top, meat packers and retailers can low-ball the producers who are desperate to unload their product and make any kind of profits; profits that Thompson said are generally razor thin.

“If we’re in black at $50 a head, that’s a huge year,” he said. “And the feedlots are the same way, the feedlots will be up $20 or be down $50 a head, and they’ll operate hundred of thousands of units like that for months at a time. And then you have $2,000 of value just kind of disappears into the ether at that retail and packing level, that’s frustrating to see.”

Fortunately for Thompson, the recent disruption to the meat packing market caused by the COVID-19 pandemic opened the door for producers to take the bull by the horns, and rewrite some of how the market is laid out.

“That kind of sent some shock through the market, and I think there were some consumer concerns there about, ’well, how stable is that meat supply,’” he said. “There’s entire industries that are blinking out of existence right now and new ones that are just spawning spontaneously like the Big Bang almost. So if there’s an industry that’s ripe for disruption I think the conventional cattle market would be a good one.”

The spontaneous big bang of industry innovation being seen throughout the pandemic, sparked Thompson to crunch some numbers and what he found was that he could essentially cut off the top of the cattle market pyramid, and deliver the beef produced from his cows at an incredible savings to the consumer, while also giving his profit margins a boost.

“I was astonished when I ran the numbers on this,” he said.

Thompson calculated that he could send his yearling calves to a feedlot on his own, allow them to reach their target weight of right around 1,400 pounds, then using local butchers, process the animals and sell them directly to consumers at drastically cut costs. Even with the additional cost of maintaining his animals in a feed lot and allowing for a fair mark up, Thompson can offer consumers a higher quality meet product at a savings of over $1,000 off of the retail price.

“I’d way rather get to where we’re pricing off of what it costs us to produce them … and still provide a decent value to the consumer,” he said.

That realization prompted Thompson to start West Dakota Beef Company, a consumer direct meat selling business which will offer folks the opportunity to buy whole or half beef carcasses directly from his family’s ranch located along the Redwater River.

“The goal would be for me to remove myself from the cattle market completely. … We’re taking ourselves out of that marketing, that price discovery process,” he said.

Thompson estimates a 1,400-pound animal will produce around 570 pounds of usable meat. That 570 pounds breaks down to approximately 215 pounds of ground beef, 99 pounds of round roasts and steaks, 105 pounds of chuck roasts and steaks, 93 pounds of rib & loin steaks, and 50 pounds of other cuts (brisket, flank, skirt, short ribs). All that could cost around $4,500 at a retail store, Thompson said he would be selling his beef at $3,200 for a whole order and $1,800 for a half.

“People will be able to place orders now … and the product will be ready to pick up just in time for grilling season to start,” he said. “So that’s kind of the impetus behind this, is that we can save the consumer some money on a very, very high-end product and hopefully elevate our quality of life considerably.”