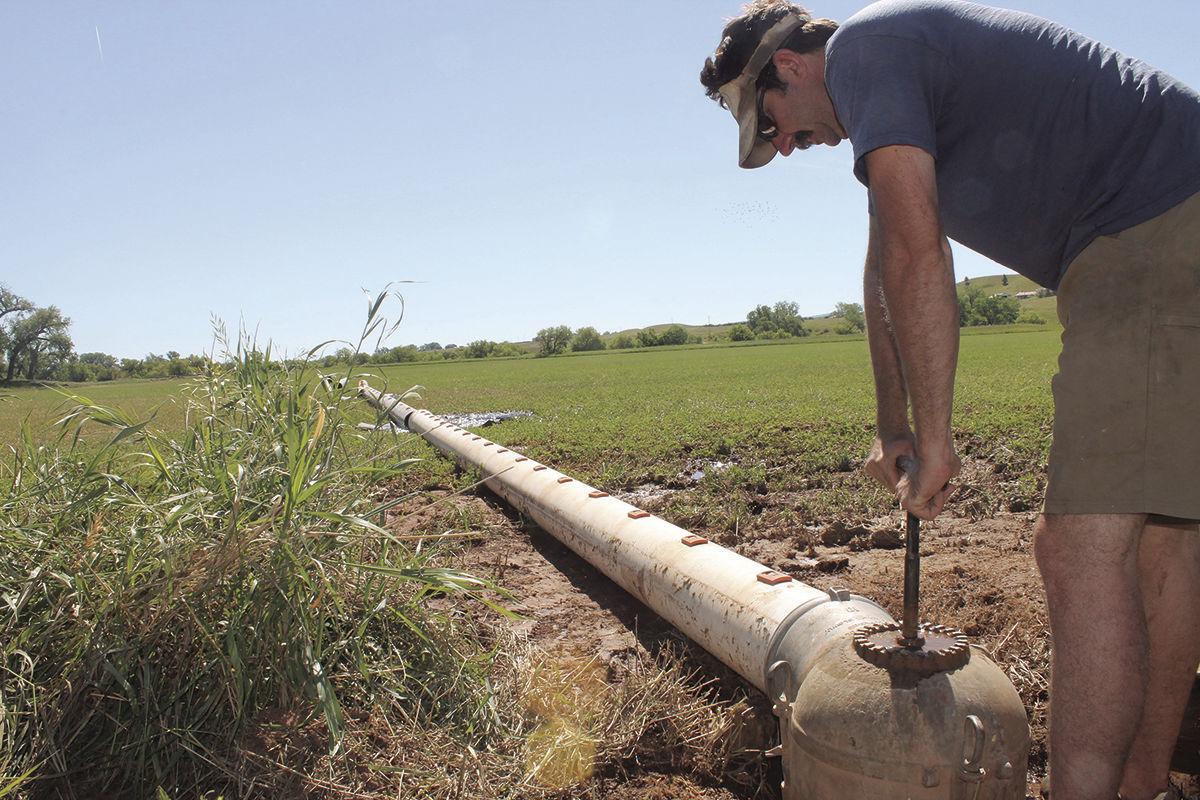 Aaron Thompson slowly closes the valve on one of his irrigation units to stop the flow so he can extend the line of pipes and continue the process. Pioneer photo by Alex Portal 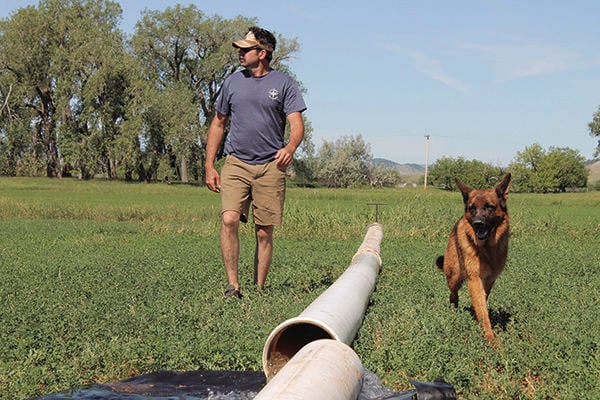 Aaron Thompson slowly closes the valve on one of his irrigation units to stop the flow so he can extend the line of pipes and continue the process. Pioneer photo by Alex Portal

“I can not put enough emphasis on how important nice irrigation infrastructure is,” said Aaron Thompson, a local rancher who says irrigation is vital to his operation in this part of the country.

“If you don’t have to irrigate one year, it’s a real treat and a real surprise,” Thompson said. “The last two years in ‘18 and ’19 we did not irrigate once. … That was definitely what I would call an anomaly.”

Thompson said the summers of 2018 and 2019 were exceptionally wet.

“(There) could be a lot of different names on it. It’s not my ditch by any stretch of the imagination,” he said.

The Thompson ditch feeds six different irrigation systems used by members of the community to maintain their crops. The ditch runs through each of their properties before depositing back into the creek, so any runoff or unused water isn’t wasted.

“Every step on the evolution of irrigation is aimed at increasing the efficiency of the use,” Thompson said. “You want to do more with less water at every step.”

Thompson’s irrigation system connects to the ditch with a network of underground pipes. The water is fed through the pipes and up to the surface via valve units placed throughout his property, which he can attach a long series of 10-inch diameter pipes to and run a long series of 10-inch pipes across the top of his crop fields. The water then flows through the pipes and is dispersed throughout the field via flood irrigation. The amount of time it takes for the water to travel from the outpouring of the pipe to the bottom of the field is called a “set time.”

“Those set times vary wildly. They can be 12 hours, they can be 20 minutes, they can be anywhere in between, and none of them are the same,” Thompson said.

Each ditch is allocated a certain amount of water, which each participant must share. Growers must monitor each system’s set time carefully in order to maximize the water’s use without taking too much away from the other members of the ditch. The Thompson ditch is allocated 22 CFS (cubic feet per second) of water, which is regulated through a head gate located at Redwater Creek.

“That’s a pretty good jag of water. And if everybody on the whole ditch is irrigating all at the same time we need every bit of it.”

Thompson said irrigation is an absolute necessity for growers with smaller acreages looking to maximize their crop yield.

“One acre of irrigated land down here is probably worth 40 to 50 acres of non-irrigated ground,” he said. “That’s the difference in productivity.”

Thompson said ideally, he would be able to time his system just right so that he could stop the flow of water at the top of his field so that the very last plant at the very bottom of his field receives the exact amount of water it needs to flourish without any of the water making it past that point.