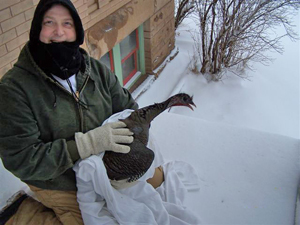 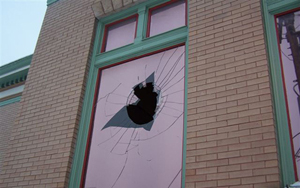 A turkey crash-landed into a window on the north side of the Deadwood Public Library early Sunday morning. The turkey was released unharmed.

A turkey crash-landed into a window on the north side of the Deadwood Public Library early Sunday morning. The turkey was released unharmed.

DEADWOOD — Get a read on this turkey. On Sunday morning, instead of arriving at church just down the street, a turkey crash landed in the Deadwood Public Library instead.

“One thing we noticed is that he did not go down the aisle with the cookbooks in it,” said Deadwood Public Library director Jeanette Chaney-Moodie, who watched from her post behind a door, as her husband John and Sgt. Ken Mertens of the Deadwood Police Department corralled the 20-plus pound culprit in 20 minutes flat by placing a blanket over its head.

They soon picked it up, took it outside and set it free.

Chaney-Moodie received a call around 9 a.m. Sunday morning from the Lawrence County Sheriff's Office, informing her that one of the library windows was broken.

Around 10 a.m. Mertens of the Deadwood Police Department said he, too, was notified that the window was broken and went over to check it out.

“I drove up Shine Street and sure enough, there was a hole in the window,” Mertens said. “The funny thing was, I couldn't see any footprints and the sidewalk was snowblown, so I was thinking the guy who snowblowed maybe shot a rock up and that's what happened.”

Upon closer investigation, Mertens and Chaney-Moodie discovered the culprit.

“As soon as we got close, we could see exactly what was going on,” Mertens said. “And that turkey wanted back out that hole. It became painfully obvious what was going on. He was flying all over the library.”

“There was glass and … all over the place,” she explained. “That was about all the damage.”

The window that was broken was thick and was one of the original historic windows in the library.

“I can't believe he wasn't hurt,” Mertens said. “In this case, we caught the culprit and then we let him go.”

Mertens said there was a positive side to the quandary.

“I was relieved that it wasn't vandalism, though. Those cases are always hard to solve. There are no answers for the victim.”

When the turkey was freed, he ran behind a bush and that was the last he’s been seen.