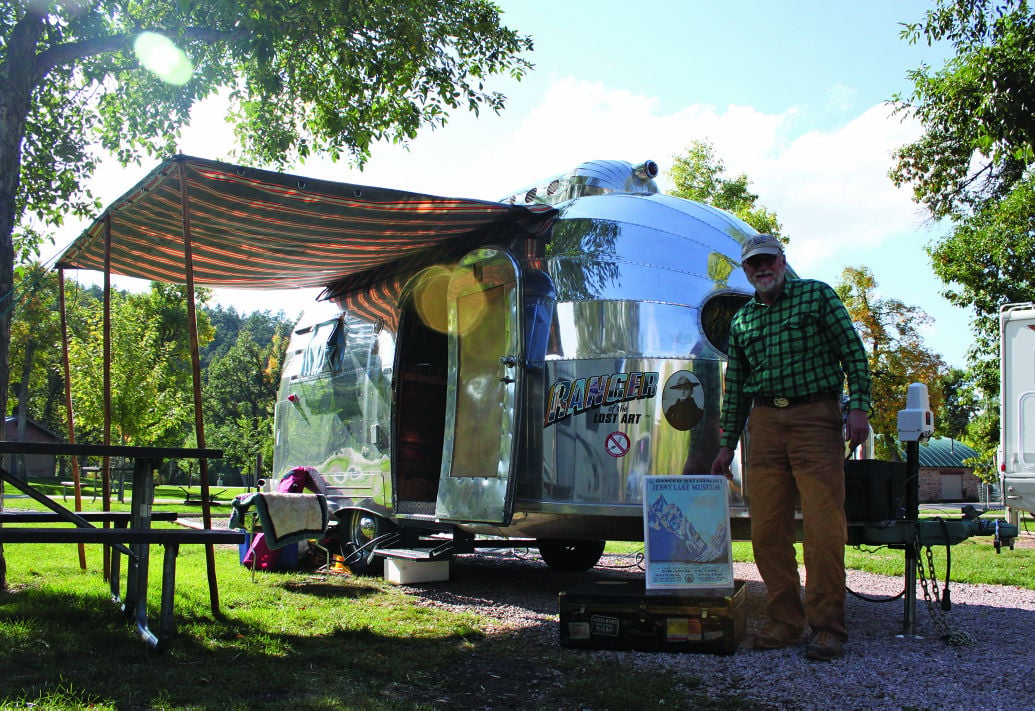 Doug Leen, the "Ranger of the Lost Art" poses with  an early WPA-produced print for Grand Teton National Park that he discovered in an old barn in 1973. Since then, Leen's become the de facto expert on WPA national park posters. Leen's traveling the country pulling his 1948 Airstream trailer, sharing the WPA parks poster story at campgrounds and museums nationwide. 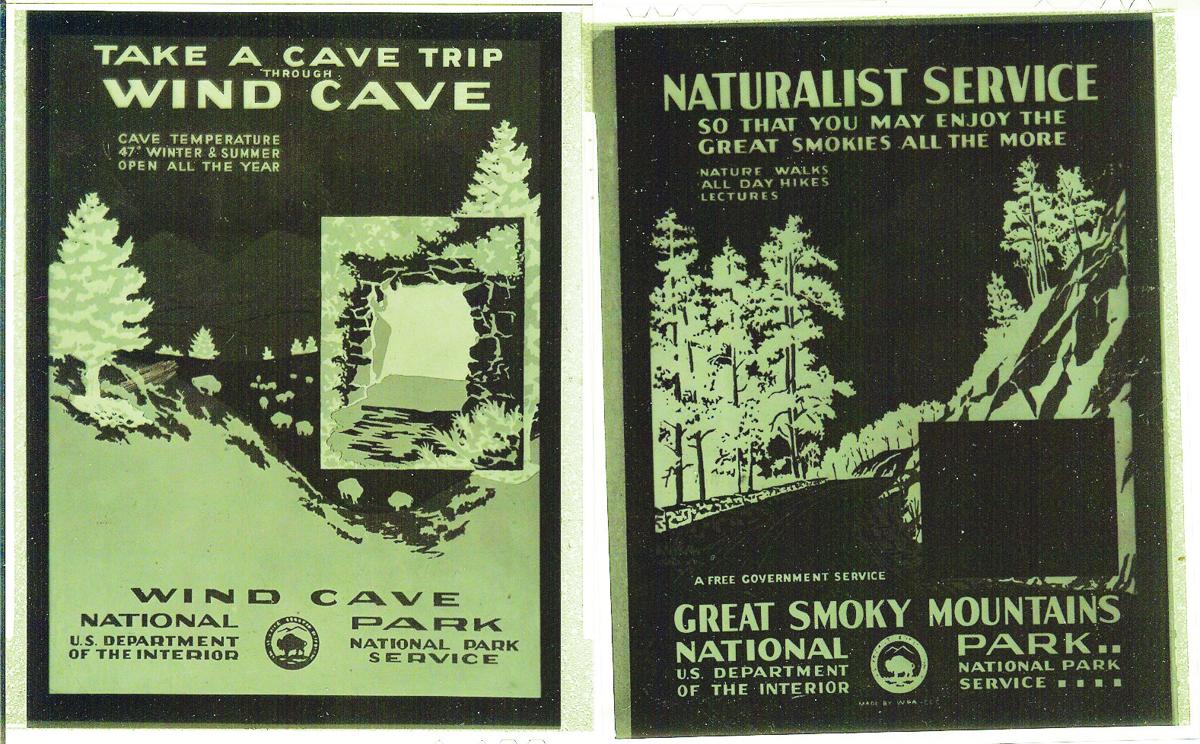 Leen has recovered original prints of all 14 WPA national park poster designs except for those of Wind Cave National Monument and Great Smoky Mountains National Park. This image is a scan of the original black and white negatives of the designs.

Doug Leen, the "Ranger of the Lost Art" poses with  an early WPA-produced print for Grand Teton National Park that he discovered in an old barn in 1973. Since then, Leen's become the de facto expert on WPA national park posters. Leen's traveling the country pulling his 1948 Airstream trailer, sharing the WPA parks poster story at campgrounds and museums nationwide.

Leen has recovered original prints of all 14 WPA national park poster designs except for those of Wind Cave National Monument and Great Smoky Mountains National Park. This image is a scan of the original black and white negatives of the designs.

SPEARFISH — He calls himself the “Ranger of the Lost Art.” Like Indiana Jones, the adventurous archeologist who partially inspired the moniker, 69-year-old Doug Leen, of Kupreanof, Alaska, has an all-consuming passion for recovering lost history for the public.

For the next 14 months the veteran national park ranger, dentist, and amateur historian will travel the country on a mission to stir up interest in an 80-year-old public art project designed to promote America’s National Parks as part of the park system’s 2016 centennial celebration. He carries with him five rare national park posters that might’ve been lost to history if it weren’t for him. And he’s on a mission to recover two pieces of the original poster set that retain long-lost status. When was the last time you cleaned out your attic?

Franklin D. Roosevelt established The Works Progress Administration, or WPA, in 1935 as part of the New Deal. In a largely successful effort to curtail unemployment the WPA put than 8 million American citizens to work on government projects from 1935 to 1943. This included the construction of more than 115,000 buildings, some 78,000 bridges, and roughly 650,000 miles of roads. Today, the WPA is most widely recognized for these projects, which affectively defined the architecture of U.S. infrastructure in the 20th century.

One could argue the silk-screened posters of the Federal Art Project defined American pop art in the 20th century, producing more than two million posters from 35,000 unique designs in an eight-year period. WPA posters promoted everything from national health initiatives to public art performances to travel.

It was the travel posters that stuck in the American collective consciousness across time, especially an iconic series promoting U.S. National Parks. Posters from this campaign remain instantly recognizable to this day thanks largely to none other than the Ranger of the Lost Art.

WPA national park posters weren’t always treated so reverently. In fact, they were very nearly forgotten completely. But one day in 1973 a young ranger at Grand Teton National Park noticed a worn poster in an old barn during the park’s annual cleanup. Rather than toss it in the burn pile he asked his boss if he could keep it.

Young Doug Leen had no idea how deeply that old poster would change the course of his life, he had no idea he was single-handedly saving a piece of American history from fading into obscurity, he just thought it would look pretty cool on his wall.

The old Grand Teton poster remained tacked to Leen’s wall through the end of his seven-year career as a National Park Ranger, through his years at dental school, and into his tenure in private dental practice in Seattle — 20 years all told.

“I’d look at this thing and think, ‘you know, Doug, there’s a story here. This poster’s going to make you a million dollars some day, there’s something behind this,’ facetiously,” Leen said.

In 1993, Leen finally found a sliver of context in which to place his antique Grand Teton poster when he stumbled across a book; “Posters for the People: Art of the WPA,” by Christopher DeNoon. The Teton poster wasn’t in the book, nor were any others in the National Park Series, but the style was strikingly similar.

Around that same time Leen received a call from an old friend at Grand Teton National Park looking for an idea for a poster to commemorate moving the park’s Jenny Lake Museum later that year.

This is where the odyssey began. Leen worked to reproduce his beloved Teton poster in his first attempt at any artwork of that sort. The park sold 600 of those reproduction prints.

“At that point I thought, ‘you know, I could do this for the whole park system,’” Leen said. “I only had one (original), but I thought I could make them up for all the parks in this style.”

The newly minted resurrection artist decided to start with Yellowstone. But he wanted to make sure the park didn’t have its own historic WPA poster like Grand Teton’s before he started from scratch.

Leen called Tom DuRant at the National Park Service Archives in Harper’s Ferry, W.Va. to inquire on other WPA park posters. Through some strange coincidence, DuRant had just returned from a search for National Park posters at the request of Grand Canyon National Park, who had an old poster on hand that they wanted to know more about. That poster became the second known surviving original in the WPA park series. Questions on its provenance led to DuRant’s discovery of black and white negatives of 13 different WPA park designs.

“That discovery was the Holy Grail. From there the poster momentum grew,” Leen said. “The passion all spread from that one poster, and once that story started to unfold … it is like Indiana Jones, you’re looking for this lost art.

The discovery of the black and white negatives set Leen off on two quests he continues to this day.

The initial quest to reproduce each poster from the negatives set him on a quest to discover remaining original prints. Without full color original prints for reference Leen and his artists — Mike DuPille first, then Brian Maebius — had to guess at what colors to use.

Posters turned up in the dark corners of attics, behind cobwebs in crawl spaces, beneath piles of pseudo-pronagraphic ephemera in antique shops, and more. Some of the oddest discoveries occurred within the park system itself.

Thirteen copies of a WPA poster for New Mexico’s Bandelier National Monument were discovered in the park superintendent’s office where they’d been in use as file drawer dividers for some 50 years. That poster was totally unknown before the discovery, as Harpers Ferry had no negative of it.

Leen said WPA artists likely produced about 50 prints of each design. That means a total of about 700 park prints were produced in total. So far, 42 original prints — 12 of the 13 black and white negative designs and the Bandelier design — have been recovered, or roughly 6 percent. Original prints of the Wind Cave National Monument and Great Smoky Mountain National Park designs are still missing.

The WPA national park prints were designed for distribution within the parks and in surrounding communities; they weren’t intended for long, distinguished lives on the stark white walls of art galleries.

“These prints were, of course, never for sale, they were just advertisements, and they were torn down and taken home and crayoned by kids — some were cut in half, like in White Sands, New Mexico, where they were used in a plant press,” Leen said.

As for the poster reproduction quest, Leen and his team have reproduced all 14 known WPA park poster designs, most of them from black and white negative.

While he can’t be totally certain, Leen believes the WPA stopped the National Park poster project at 14 designs for one simple and rather plausible reason: WWII got in the way. Leen has reason to believe the presumed final design, the Bandelier National Monument poster, was completed on Dec. 6, 1941, the eve of Japan’s attack on Pearl Harbor.

“By Dec. 8th it was a different world, and I’m sure these posters were all but forgotten,” Leen said. “Actually, what did happen was the posters were gathered up and they were taken over to the old US Mint building in San Francisco sometime between 1941-1945, when that building was a National Archive. And when that building closed after the war ended, the Federal Archive shipped the posters back to their respective parks.”

… where many of them were apparently repurposed as filing cabinet dividers.

The unlikely discovery of several original Bandelier National Monument prints cut in two inside a file cabinet, and all the other bizarre ways original prints resurfaced, leads one to believe there’s a good chance original Wind Cave and Great Smoky Mountain prints will turn up somewhere, sometime.

Leen asks everyone he meets to look in their attics, to keep their eyes peeled at garage sales and antique shops, and of course to contact him when the prints emerge. He’d like to buy them, share them with the nation on the road, and donate them back to the National Park Service along with all the other originals in his possession.

“I want this stuff back in the public domain, that’s my goal,” Leen said. “And to do that I’ve got to flush out the two that are still missing. It’s something I’ve got to do — it just burns harder every day. “