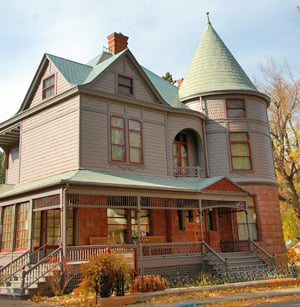 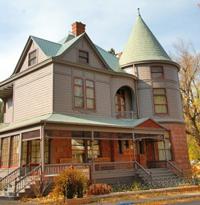 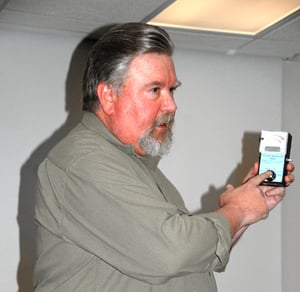 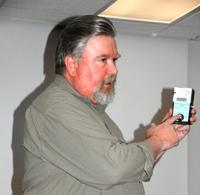 DEADWOOD — Footsteps, a door closing, children talking and plenty of electronic voice phenomena (EVP) are evidence of paranormal activity in two of Deadwood's most storied and stately historic structures.

It may have been Mary, it might've been Alice and it most certainly could have been Nathan or W.E.

Whatever or whoever presented themselves during the Black Hills Paranormal Investigations of the Adams Museum & House are proof positive that there is paranormal activity in the decades-old Deadwood mainstays.

“The evidence collected, along with personal witnesses, indicates that there is a level of paranormal activity taking place within the Adams House,” read a statement slide contained in a video presentation by Black Hills Paranormal Investigations  to a group of nearly 100 packed into the Mary Adams Lecture Hall at the Homestake Adams Research and Cultural Center Saturday afternoon. “We can't say with any certainty that we captured an Adams or a Franklin, but we can say we captured something.”

“We don't go into an investigation looking to prove a haunting,” another slide read. “We let the evidence tell the story.”

“That was me walking up the steps,” said investigator Mark Shadley. “There is no doubt in my mind that there was someone coming up the stairs behind me.”

Documentation and debunk are two buzz words that were flying freely during the presentation.

Shadley said he is a complete skeptic and consequently spent much time over the course of the evening trying to debunk the footsteps.

“I tried to recreate what happened, but I just couldn't recreate it,” Shadley said. “We have a rule in this business, if you can't document it, it didn't happen. In this case, it's clearly documented.”

Another investigator said that one of the most interesting pieces of evidence collected overnight at the Adams House was when a door opened and closed when no one was in the home.

“We were actually all in the Adams gift shop, which is a separate, smaller building beside the house,” he explained.

After the door was heard opening and closing, they called their counterparts to see if someone went in the house without telling someone.

“There was nothing outside that did it,” he said.

Electronic voice phenomena, or EVPs presented as evidence include a voice heard in Mary Adams' room, children's voices in the smoking room and a female voice humming in Alice Adams' bedroom.

“More than one time during the night, we heard people talking, but the equipment didn't pick it up,” Shadley said. “When we heard the children's voices, it was 3 a.m. and heavy snow was falling, we tried to debunk it, but we couldn't find anyone.”

Adams Museum director Mary Kopco is seen in the presentation giving her client interview in the Pioneer Room, explaining how a female apparition has presented herself in the room and that every holiday alarms go off, as well as every time Mr. Adams' picture is moved. Soon, investigators point out a clear “knock” that is heard from the vicinity of where Mary is standing.

As they ascend the stairs nearest the Pioneer Room, a voice is clearly heard, whispering “This way.”

Rustling of clothing and the moving of a wooden chair or table are also heard.

“One gets the uncanny feeling of being watched in the Museum,” the presentation summed up.

Although paranormal activity presented itself, investigators said they felt no malice in the house.

“And we have to be careful about feelings, here, because feelings aren't evidence,” Shadley said. “I didn't feel threatened at all. I found the house very comfortable. The Adams House has such an awesome history. I would be more than comfortable to stay in the house all night long.”

The 20 minute presentation of the team's findings was gleaned from seven hours of footage on several machines from each location. Each machine then had to be viewed in real time to identify the paranormal activity.

“Well, we spent around seven hours at each location,” said lead investigator Mark Rowland. “So it took around ten times that long to review. We have nine members on our team, so everyone brings their own findings. We then met several times to debunk those findings. The items that we achieved 100 percent consensus on were presented as valid findings. The rest were thrown out.”

The group is highly sensitive to “false positives,” so they take all sorts of variables into account that could inaccurately present themselves as evidence.

“What you're hearing is raw, we just turn up the volume so you can hear it better,” Shadley said. “We did get enough evidence to prove that there is a certain amount of paranormal activity in the Adams House, but it's not going to harm anyone. It's just there. It's part of history.”

Shadley said they may have more gigs coming up in Deadwood, but mum's the word on where.

Black Hills Paranormal Investigations is based in Rapid City and the team was formed five years ago. In an effort to maintain the highest ethics they don't charge fees and they don't solicit clients.

“We were honored to investigate the Adams Museum & House because of the history that is behind them,” Rowland said. “And we were tickled to get some evidence.”