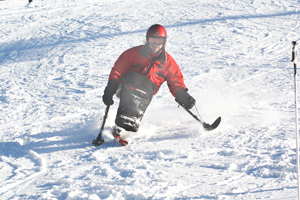 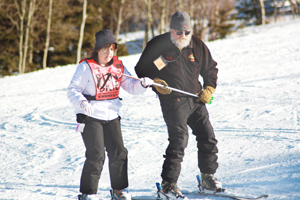 LEAD — Learning how to ski involves a certain amount of both skill and trust.

With enough practice, almost anyone can become at least somewhat skilled in the sport. But for someone who has never skied before, putting their trust in a total stranger to help get them safely down a mountain of snow is much more than a blind leap of faith — especially for someone who cannot see.

She put her faith in two complete strangers to guide her safely down the Stewart Slope at Terry Peak Ski Area when she decided to try skiing three years ago.

She wouldn't have believed it herself if someone had told her 25 years ago she would be skiing today.

She had tried skiing with friends before she lost her sight, but never quite got the hang of it. She spent more time with her feet in front of her rather than beneath her, she recalled.

"I was on my butt the whole way down. I was in tears because I couldn't get down the hill," she said.

But on Monday, there were no tears from Defrancesco, only smiles, as she made her way down the hill with the aid of her guides Deb Tinker and Dale McMillin.

With the two at her side every step of the way since Defrancesco first set foot on the mountain, she has put her complete faith in the guides she now considers among her close friends.

Up the chairlift and down the hill they went, over and over again, chatting and laughing as the 44-year-old novice skier continued to gain mettle with every turn.

Defrancesco spent the day perfecting the turns that will give her an edge in Thursday's races.

McMillan quipped that Defrancesco will be showing him a thing or two about skiing by then if she continues to perfect her skills at such an impressive rate.

"This is so thrilling," Defrancesco beamed. "Ski for Light has done so much for my confidence."

The trio is among the more than 150 volunteers and participants in the 33rd annual Black Hills Regional Ski for Light. The program pairs blind, visually impaired or physically challenged individuals with guides to teach them how to cross-country or downhill ski.

Defrancesco fell in love with Ski for Light after attending her first one in 2010. She met the love of her life at the 2011 event, and moved to North Dakota in July to be with her boyfriend Jesse Shirek, she said.

This year, she introduced her best friend, Tennessee, to Ski for Light. She did not want her guide dog of eight years to retire at the end of the year without knowing the special friends she now considers part of her family.

"Ski for Light is like one big family," Defrancesco said. "Every year I come back it feels like I'm coming home to see my family."

Ski for Light continues through Jan. 26 and concludes with a banquet and awards ceremony Thursday night at the Days Inn (formerly Golden Hills Resort) in Lead.