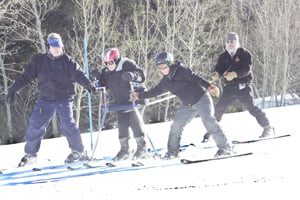 Ski for Light participants took to the slopes and cross-country trails on Thursday to race against their own times during the final day of Black Hills Regional Ski For Light at Terry Peak Ski Area. Skiers were scored in different events according to how close they came to their best posted time of the week. The weeklong event concluded last night with an awards banquet at the Days Inn (formerly Golden Hills Resort) in Lead. 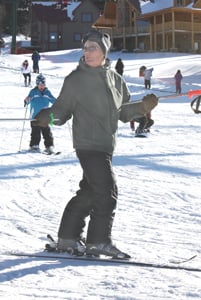 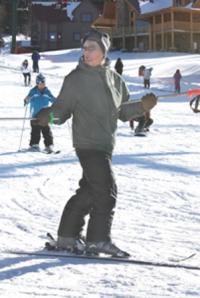 Ski for Light participants took to the slopes and cross-country trails on Thursday to race against their own times during the final day of Black Hills Regional Ski For Light at Terry Peak Ski Area. Skiers were scored in different events according to how close they came to their best posted time of the week. The weeklong event concluded last night with an awards banquet at the Days Inn (formerly Golden Hills Resort) in Lead.

LEAD — Watching ski instructor Deb Tinker with a student, her care and expertise are obvious. She brings a feeling of comfort and trust, both of which are elementary in any teacher and student relationship. But for her visually or physically challenged students, it is crucial.

That trust was evident this week as she guided Sherry Defrancesco, a participant in the 2012 Black Hills Regional Ski For Light, held this week at Terry Peak Ski Area.

Defrancesco is totally blind, but she skied with ease at her instructor's side after learning some basics.

This is the third year Defrancesco and Tinker have skied together. The two have become good friends since first meeting in 2010.

Tinker has taught Ski For Light participants how to downhill ski since 1989. Prior to becoming a Ski For Light instructor, she volunteered in the downhill program for seven years.

She has taught professionally for 30 years, earning the trust of students who range in age from toddlers to senior

Tinker was a ski instructor at Deer Mountain Ski Area in 1982 when she experienced her first Ski For Light. She had heard about the program from friends, but had never gotten involved before.

She has forever been thankful that longtime Ski For Light instructor Mark Albrecht, now deceased, invited her to the group's picnic that week.

Tinker has led both visually and physically impaired participants, and enjoys every minute of it, she said.

She still remembers all her students' names and even checks up on them once in awhile. Many of them have continued to ski.

Her first ever Ski For Light student, Troy Schenk continues to participate in the event every year, and took a run with her on Tuesday.

“That was really fun because he was the first one I helped in 1989,” Tinker said.

She was especially pleased that Schenk, who is almost completely blind, now skies in front of her rather than beside or behind her. “He has his own equipment now and goes to some big ski areas. I think he really enjoys the sport,” she said.

Another student, Brianne Alley of Lead, also continued to ski after working with Tinker during the week-long event many years ago.

“I know that even after she left the hill, she kept skiing and has been on some ski trips to Colorado,” said Tinker.

Alley has cerebral palsy and was among some of Tinker's earliest Ski For Light students.

Tinker uses the same techniques with Ski For Light participants that she has always used to teach skiing, although she makes some adaptations based on the skill level and desires of each skier, she said.

Tinker incorporates three basic concepts in her teaching: visual, audible and tactile/kinesthetic. She relies on her students' response to the different techniques to determine their best style of learning and adapts accordingly.

For Ski For Light participants, one or more of those three senses may be missing, which increases the challenge. Some participants have skied in the past while others have never been on skis, which she also must take into consideration.

Regardless of how her students learn, at some point they all have to move to get to the bottom of the hill, Tinker laughed. “I want to get them to feel it in their feet and in parts of their body that are really moving the skis,” she said. “They need to learn how to direct the skis.”

For someone who is blind or physically impaired, that movement is especially scary and the most difficult to control, much like her other students. But she's right by their side the entire way to help them gain confidence in their own ability.

“A person who's blind doesn't have a visual sense of learning,” said Tinker. “But I still have to get them down to the foot part and how to control their skis.”

“They have no sense of where the slope is or how steep it is,” she added.

While that can be good in the sense that the fear factor is largely diminished since the student has no idea what lies ahead, Tinker said she has experienced the feeling of vertigo herself when she was caught in a blizzard once. She uses that situation to help guide her blind students.

“I fell up the hill but couldn't get my balance because I couldn't see anything,” she said. “I had to find the fall line to figure out which direction I was going.”

Tinker explained that the fall line is an imaginary vertical line on the mountain that is most directly downhill. The more directly a skier is in line with the fall line, the faster they go. Skiers can stop themselves if they are at a 90-degree angle to it, she said.

Tinker uses an “edgie wedgie,” a device that keeps the tips of the skis together for most beginner skiers because the angle of ski tips determines the direction a skier is headed and at what speed, she explained.

Learning how to keep ski tips together is the first step in mastering the “snowplow,” a technique that forms the skis into a wedge and determines how fast a skier is going, she said. “Snowplowing” is also how beginners learn to stop themselves.

Ski For Light instructors often hook a tether to the student and ski behind them to help control speed, she said. Other times they use a ski pole with each holding on to one end, or ski down the hill backwards in front of the student to guide them.

“We use whatever a person is comfortable with, whether they want to use the pole with you or hold your hand,” said Tinker. “Sometimes I ski backwards, holding their tips together and pushing their feet out and out apart to get them to feel how to pressure the skis to control their speed.”

Another vital part of an instructor's job is calling out directions for visually impaired skiers to let them know which way to turn or where they're headed so they don't run into or over something, she said.

“We tell them to go right or left, or to stand heavier on their downhill ski, or that we're going across the hill so they learn to trust that we're leading them where we're supposed to be leading them,” said Tinker.

Safety is a key factor in skiing, and blind or visually impaired skiers are especially vulnerable so they wear an orange vest indicating their challenge to make sure others are aware of their presence, she said.

An instructor must be aware of every move the skier makes and anticipate what might happen next, another vital safety practice.

Regardless of which technique is used, getting their students to ski independently is the ultimate goal.

“They just need to know where they are on the hill, and that they've got a fall line,” said Tinker. “If your skis are moving, whether it's backwards or forward, you are in the fall line. If you don't want to be moving, you need to get yourself at a 90 degree angle (to the fall line) and you're stopped.”

Just like the participants and other volunteers who look forward to Ski For Light each year, Tinker plans her vacation well in advance so she can be part of it.

“We're all just like a big family,” she said. “It's so rewarding. It's just great to help people and see that they have a good time. I've made a lot of good friends over the years.”