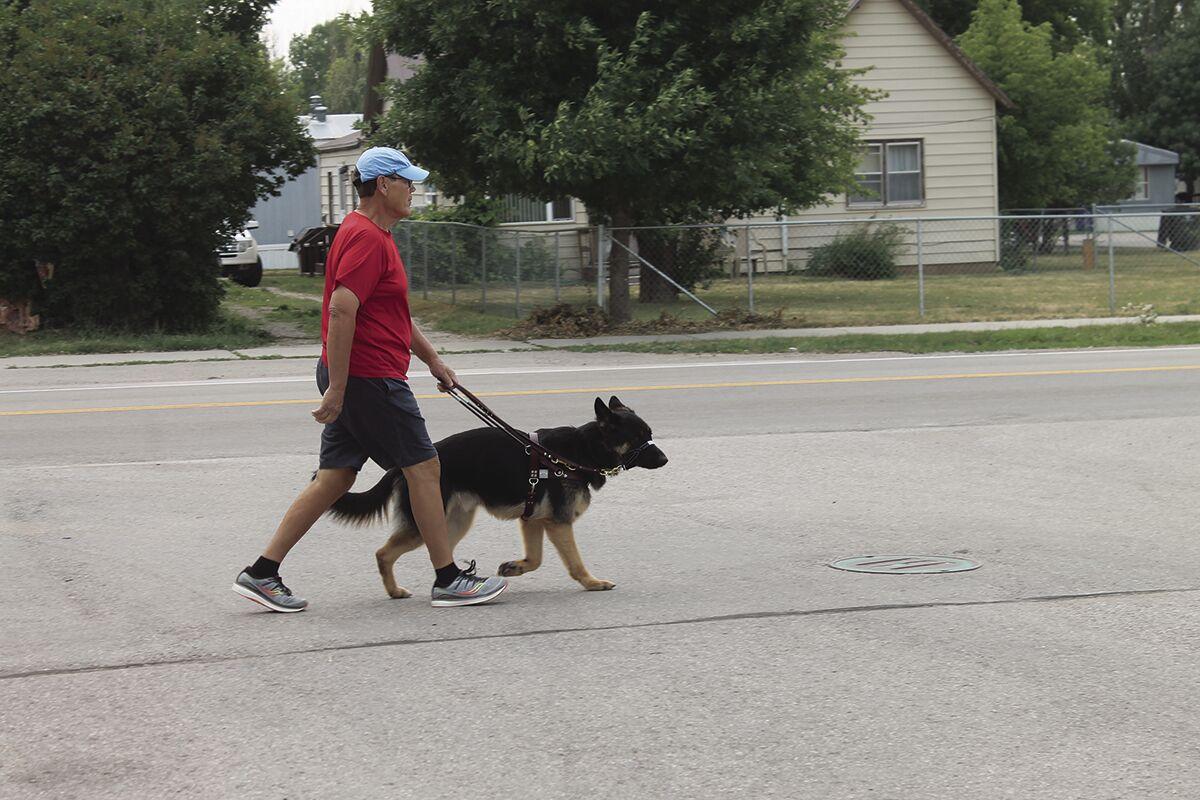 Jim Hoxie and his new guide dog partner, Mr. M, work together to navigate their way around town. Pioneer photo by Alex Portal 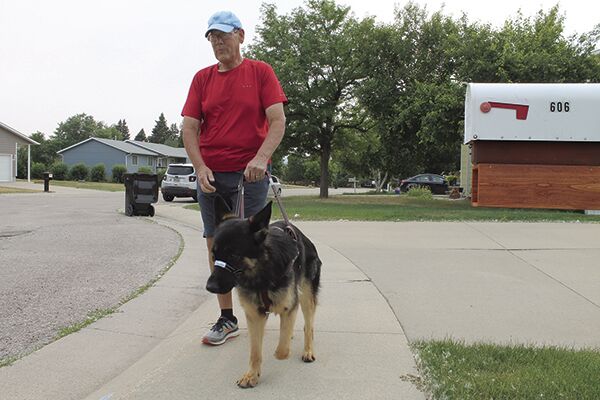 Hoxie and Mr. M out for a stroll. Pioneer photo by Alex Portal

Jim Hoxie and his new guide dog partner, Mr. M, work together to navigate their way around town. Pioneer photo by Alex Portal

Hoxie and Mr. M out for a stroll. Pioneer photo by Alex Portal

SPEARFISH — Jim Hoxie has been using his blindness to bring awareness about white cane safety and etiquette for years, giving talks at schools and even writing a children’s book titled “Grandpa’s White Cane” to help spread the word. Now he’s trading in the cane for a canine, with his new guide dog, Mr. M.

“You have to have the training with the tall white cane and be proficient in travelling by yourself,” Hoxie said. “It’s a different type of travel with the cane than the guide dog.”

After receiving his training at the Edward Hines, Jr. Veterans Affairs Hospital near Chicago, Ill., Hoxie teamed up with representatives from the Fidelco Guide Dog Foundation in Bloomfield, Conn., who commenced an extensive review process to determine not only his proficiency navigating with the white cane, but also to determine the specific dog that would be the best fit for him and the area.

Since 1981, Fidelco has been training purebred German Shepherds as guide dogs for the blind and low vision community, then a dog along with a placement specialist, travels to the individual for an intensive two-week training program.

“This way we’re able to work with the person in their home area where they’re going to use the dog,” Peter Nowicki, a placement specialist with Fidelco said.

Recipients of the program are not charged for the dogs, but are encouraged to make a goodwill donation of $150 to the foundation after six-months, to foster a sense of ownership and commitment to the animal. Fidelco is a completely donation-based nonprofit organization. Nowicki explained that the first dogs bred and used as guides were German Shepards, and along with Labrador and Golden retrievers, remains one of the most common breeds used in those programs.

“It’s because (the German Shepard) was a multi-talented, bright, intelligent dog with a great memory, great work ethic, and because of its herding instinct, it was very adept at taking commands and taking responsibility for the sheep,” he said.

Guide dogs are socialized from birth by foster families for around a year-and-a-half, then sent to the Fidelco facility where they are trained in the basic commands of guiding.

“The dog is trained to work in a straight line along the sidewalk until it comes to an intersection or a problem, and then handle that,” Nowicki explained.

As Hoxie and Mr. M walk, the dog will prompt him to stop at intersections and move around objects in his lane of travel, even if it’s above the dog’s head.

“When we walk down the sidewalk, we don’t worry about the things that are two or three feet above us, we might notice it, but it’s not a threat. For (the dog), he has to make that judgment and either slow down, identify, or go around it if it is above his head,” Nowicki said.

“If I’m caning and there’s a branch, I’m going to get slapped in the face unless I get lucky and know it’s there,” Hoxie added.

Hoxie said that although he’s learned to get around very proficiently with his white cane, having a literal second set of eyes to help him navigate has been a game changer.

“(Using the cane is), for me at least, a little slower,” he said. “You’re finding objects that are in your way … but with the guide dog … he’s guiding me around those objects, and we’re moving as fast as anyone else is walking, or even faster, which is just, for me, great.”

Mr. M has to adhere to a strict schedule with controlled interactions in order to remain at his peak performance.

“He’ll always be a dog, (Hoxie) has to maintain his ability to be a guide,” Nowicki said.

For example, having grown up with dogs as pets for most of his life, Hoxie said he was inclined to whistle to Mr. M to get his attention; a habit he had to teach himself out of.

“Someone across the street may whistle … and distract the dog.” Hoxie explained.

Mr. M is trained to know when it’s time to go to work. When Hoxie calls him and starts putting on his specially designed harness, that’s the dog’s signal to clock in.

The harness is an integral part of the two’s communication as they walk. There are two points of leading on it, a leash and a handle. When Hoxie is using the leash, Mr. M knows that he’s operating in “dog mode” and is being walked. If Hoxie is using the handle, Mr. M snaps into “guide mode” and knows he’s now responsible for both of the pair’s safety. Similar to a transmission system in a vehicle.

“(Putting the handle down,) That’s like putting the dog in neutral,” Nowicki said.

Hoxie gives Mr. M verbal and visual commands to start and stop, turn left and right, and to point out specific things like entrances to buildings and crosswalk signals. In turn, the harness worn by Mr. M signals to Hoxie if the dog is slowing down as they approach an intersection, or swerving to avoid an obstacle in the path.

Hoxie and Mr. M’s working relationship is strictly reinforced. Hoxie and Mr. M need to grow and maintain a strong bond in order to keep their partnership working. To do this, Hoxie is also the only one who feeds, relieves, and plays with the dog. Even his wife Linda and their grandchildren are encouraged not to interact with Mr. M. As a matter of fact, Mr. M is not actually the dog’s name, but only Hoxie should address the dog by his proper name so that he knows to take commands solely from him.

“(Hoxie) is the dog’s world, and the stronger and the better that bond and relationship, is the safer and more accurate and proficient traveler he’ll be outside,” Nowicki explained.

“So you don’t want to be teaching (a guide dog) bad things that could be a problem for me and my safety and his safety,” Hoxie added.

It can take up to a year or more for the bond between Hoxie and Mr. M is at a level where he can receive some attention from others without the risk of breaking his concentration. Even then, it’s especially important for both Hoxie and Mr. M that the general public respects the guide dog/handler relationship.

“If the dog is allowed to socialize with everybody and play with people or kids when they’re out then that’s what the dog enjoys doing and it’ll do that too much or instead of paying attention to its work,” Nowicki said.

“The dog, when I’m out in the community, is working. We don’t want him distracted for my safety and his,” Hoxie added.  “You normally wouldn’t run up to a dog, you just don’t know with any dog whether it’s a guide dog or not.”

It’s not all work for Hoxie and Mr. M; however, part of formulating that strong bond is engaging in some well-deserved playtime and plenty of affection.

“He just goes bananas running around here. He is a dog. And we play for maybe 15 minutes with that ball. It’s a stress reliever for him after working hard,” Hoxie said.

Hoxie said he’s excited to continue working with Mr. M, building on their relationship and entering a new phase of spreading community awareness for the blind and low-vision community.

“I knew that this would be intensive, and fun, but hard work. But this really is intensive and it really is hard work,” he said with a laugh. “The level of concentration, learning from (Nowicki) and the dog and how to work with the dog – you need to love animals and you need to be committed to doing this,” he said.

For more information about guide dog training, or to make a donation, contact Fidelco by calling (860) 243-5200, or visiting https://fidelco.org.