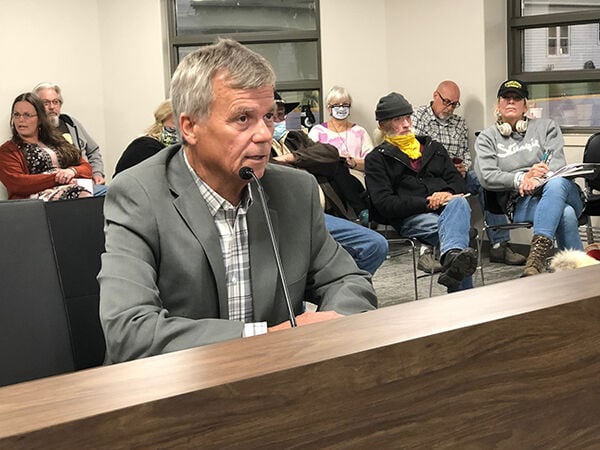 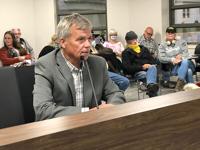 Jerry Petersen, longtime supporter of the Sturgis half-mile flat track at the Sturgis Fairgrounds, asked the Sturgis City Council to keep the half-mile track instead of using the fairgrounds land as a housing subdivision. Pioneer photo by Deb Holland

Jerry Petersen, longtime supporter of the Sturgis half-mile flat track at the Sturgis Fairgrounds, asked the Sturgis City Council to keep the half-mile track instead of using the fairgrounds land as a housing subdivision. Pioneer photo by Deb Holland

The racetrack, situated on the Sturgis Fairgrounds property, is akin to sacred ground for some people who see it as the birthplace of the Sturgis Motorcycle Rally.

The half-mile racetrack is used infrequently, and the rodeo grounds at the Sturgis Fairgrounds on Ball Park Road is being moved to a new site near Sturgis Brown High School.

Now, the city finds itself in need of buildable lots for housing which will bring more people to the community and expand the city’s tax base. One of those areas being tapped for housing development is the 22 acres of the Sturgis Fairgrounds.

That could mean the loss of the historic half-mile track.

Petersen told the council that racing on a half-mile dirt track dates back more than 100 years. First it was harness racing, then horsepower of another sort — automobiles — kept the track busy.

“This lasted into the early thirties, but by then all America lost its steam,” Petersen said. “The track was abandoned and if money had been handy, the city might have torn it down back in 1936 forever erasing our destiny.”

But Pappy Hoel and the Jackpine Gypsies adopted the Sturgis track and started combining Sturgis hospitality with their love for racing that turned it into the phenomenon known today at the Sturgis Motorcycle Rally.

Petersen said the city is at a crossroads.

“Some feel that the track is no longer a viable commercial enterprise, and so they wish to replace it,” he said. “And the decision you make on this subject will affect the city for eternity. The track is a monument to the citizens achievements more than anything else. I fear many will see the loss of the track to that of having their heart plucked out of their chest.”

Petersen said the city should show more pride in its history.

“I believe that we benefit more by restoring it to glory than tearing it down,” he said. “And there is an army of volunteers and abundance of sponsors who will help the city, if it will just help itself. Let’s not forever destroy our great future. Let’s embrace it.”

When he finished his prepared statements, Petersen asked if any city council members had questions.

“I don’t know if we have any questions at this time. I think perhaps we will in the future,” said Dave Martinson, Sturgis City Council president who was filling in for an absent Mayor Mark Carstensen.

Martinson said he believes that sometimes the general public gets worked up about different topics such as Sturgis Fairgrounds property.

“We have to realize that the timeframe is not immediate. I think on occasions, some people in public have the idea that something is going to be shoved down their throats. That’s certainly not the case,” he said.

Any comments or suggestions from Petersen or others who may feel the same are welcomed, Martinson said.

And people who have other points of view on the issue are welcome to offer their comments and suggestions also, Martinson said.

“We want to make sure that all voices are heard on this. I feel like we have a time frame when that can occur. That will give us the best opportunity to make a decision that will be in the best interest of everyone,” he said.

City council member Mike Bachand encouraged Petersen to share his biography with the Sturgis city manager, so that all city staff and council members knew with whom they were dealing.

Petersen said he had lived in the Sturgis area for 14 years and for 12 of those years he has spent time trying to get the half-mile track at the Sturgis Fairgrounds back to its glory.

Petersen has even started a Facebook page called The Sturgis Road Captains. They are a group dedicated to saving the Sturgis Half-Mile Flat Track and seeing it brought back as a Crown Jewel in venues of American Flat Track Racing, he said.

Their five-year goal for the Sturgis Fairgrounds will be to add a new grandstand and the fill in of the infield of the track with multiple recreational activities for the citizens of the community to use year round.