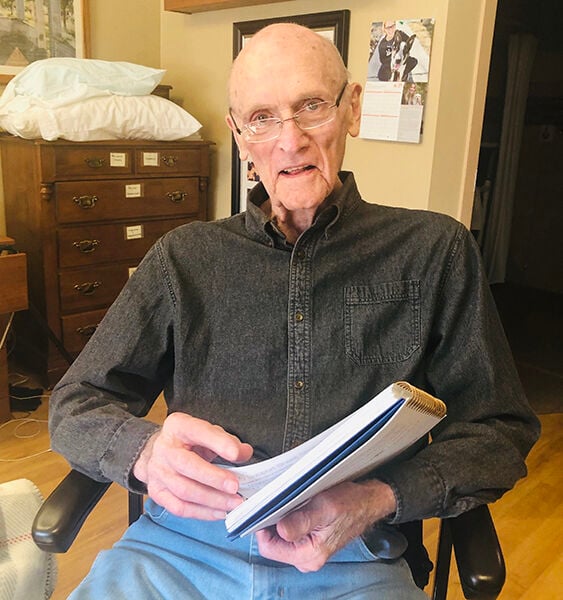 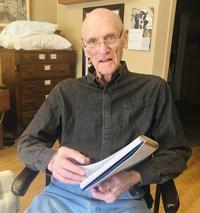 Jim Rumbolz was an active, engaged resident of the Avera Prince of Peace Retirement Community in Sioux Falls when this picture was taken in December 2019. Just six months later, Rumbolz had suffered rapid mental and physical decline that led to his death in June. He did not become infected with the coronavirus, and his daughter believes isolation and sensory deprivation contributed significantly to his passing. Photo courtesy of Terryl Cadwell 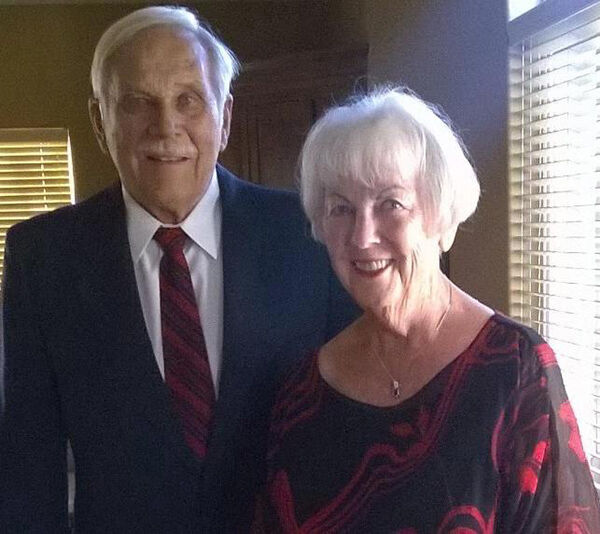 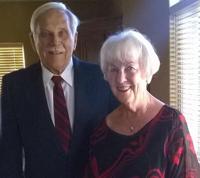 Tom and Lee Raines of Sioux Falls have worked as a loving couple to make the best of Tom’s diagnosis of Alzheimber’s Disease. But Lee now worries that Tom’s condition has declined rapidly since the COVID-19 pandemic led to restrictions at his long-term care facility that at first prevented Lee from visiting Tom, and later blocked her from touching him physically during outdoor visits. Photo courtesy of Lee Raines

Jim Rumbolz was an active, engaged resident of the Avera Prince of Peace Retirement Community in Sioux Falls when this picture was taken in December 2019. Just six months later, Rumbolz had suffered rapid mental and physical decline that led to his death in June. He did not become infected with the coronavirus, and his daughter believes isolation and sensory deprivation contributed significantly to his passing. Photo courtesy of Terryl Cadwell

Tom and Lee Raines of Sioux Falls have worked as a loving couple to make the best of Tom’s diagnosis of Alzheimber’s Disease. But Lee now worries that Tom’s condition has declined rapidly since the COVID-19 pandemic led to restrictions at his long-term care facility that at first prevented Lee from visiting Tom, and later blocked her from touching him physically during outdoor visits. Photo courtesy of Lee Raines

As nursing homes and assisted-living facilities have restricted the movements of residents and eliminated most in-person visits by friends and families amid the COVID-19 pandemic, an unexpected elderly health crisis has emerged in South Dakota and across the country.

The mental and physical health of many residents of long-term care facilities are declining and, in some cases, leading to death from the extended isolation residents are undergoing due to restrictions on visitation and interaction aimed at preventing the spread of the coronavirus among a highly vulnerable population.

Recent efforts in South Dakota to use federal relief funds to increase testing for the coronavirus among facility visitors or to implement other measures to reduce isolation have failed, leaving many worried that more elderly residents will suffer the slow decline caused by loneliness, isolation, and sensory deprivation.

Anecdotal reports of the decline of residents of long-term care facilities have become commonplace in South Dakota and beyond. Advocates for the elderly and family members of facility residents recently testified before a South Dakota legislative committee that patients with Alzheimer’s disease have declined rapidly, that residents are losing the will to live, and that some have died unexpectedly from causes not directly related to the virus.

Terryl Cadwell told lawmakers in September that her father, Jim Rumbolz, 88, was living an active lifestyle at the Avera Prince of Peace Retirement Community in Sioux Falls before the pandemic. When coronavirus restrictions were implemented, including limits on social activities and family visits, Rumbolz quickly deteriorated and died in mid-June.

“There was never a slip we noticed before COVID in any of his mental capacities at all, so this was really devastating,” Cadwell said. “I feel like it was the isolation that ended this life shorter than it should have been.”

As the pandemic drags on, medical researchers are starting to drill in on the potential consequences of extreme isolation among elderly people.

In a paper published this summer in the Journal of the American Medical Directors Association, researchers from the U.S. and Australia noted that severe loneliness was present among residents of long-term care facilities at double the rate compared with people living in a personal residence, and that the pandemic has exacerbated that difference.

“A feeling of loneliness has many deleterious consequences … including increased risk of depression, alcoholism, suicidal thoughts, aggressive behaviors, anxiety and impulsivity,” the article said.

Data compiled by the federal Centers for Disease Control and Prevention indicate that deaths among dementia patients in the U.S. have risen sharply during the COVID-19 pandemic, not only due to the virus itself.

In the second week of April, U.S. deaths due to dementia rose by 42% compared with the average deaths in the same week from 2015 to 2019.

In all, about 15,000 more people with dementia have died since March due to “unexpected” causes, which could be from the virus but also for unknown reasons, according to the CDC.

Advocates for the elderly joined with family members of long-term care residents to make the case to state lawmakers in September that some of the $1.5 billion South Dakota received from the federal CARES Act pandemic relief fund should be spent on efforts to help facilities open safely to visitors.

Their pleas for rapid testing of potential visitors and other efforts drew sympathetic responses from lawmakers, but in the end fell short. Rules set by Congress allow CARES Act money to be used only to offset net financial losses by businesses, including long-term facilities. None of the money, which must be spent by Dec. 31, can be used on capital projects or to create new programs or install new infrastructure.

That leaves long-term care facilities with no new money to buy or use rapid COVID-19 tests on visitors who want to safely enter the facilities to visit relatives.

Efforts to find money and methods to help reduce isolation are continuing in South Dakota as more attention gets paid to the plight of long-term care residents, said Joe Schartz, public policy director for the Alzheimer’s Association of South Dakota.

“It’s not unique to South Dakota; it’s a national crisis and is happening all over the world,” Schwartz said.

State Sen. Deb Soholt, R-Sioux Falls, has a keen interest in helping facility residents and their families, both as the chair of the Senate Health and Human Services Committee and as a daughter whose 91-year-old mother is in an assisted-living facility.

Her mother suffers from cognitive decline but is mostly self-sufficient in the facility, Soholt said. Since the pandemic hit in mid-March, Soholt has seen her mother’s mental, spiritual and physical condition decline.

Soholt, a registered nurse, said she supports the facility’s measures to protect her mother, other residents, staff and visitors from the virus that is especially deadly to the elderly. But Soholt said that as COVID-19 protections have restricted the movement of residents within the facility, reduced opportunities for socialization in the home and limited opportunities for family and friends to meet with and physically touch her mother, she has watched her mother suffer emotionally and her physical condition worsen.

“My mom has a great attitude and a sweet personality, but you can just see the exponential decline,” she said.

Soholt said she remains hopeful that there may be CARES Act funds allocated to South Dakota that do not get spent by the Dec. 31 deadline, and that Congress may allow that money to be used for reasons other than to cover net losses. If that fails, Soholt said she expects that elderly advocates will appear before the Legislature during the 2021 session starting in January to request state money for programs aimed at mitigating isolation of long-term residents.

Many facilities have allowed residents to have brief visits with patients outdoors on patios or in courtyards, though without physical touching. Other novel methods have been used to reduce isolation, including visits through windows, via internet connections or even through messages left for staff to deliver to residents.

When the pandemic hit in March, the Edgewood Rapid City senior living complex was closed to almost all visitors.

At the facility, which has about 95 residents, restrictions on visitation and movement took an emotional and physical toll on residents and staff, said Director Erin Andersen.

After some research, and with donations of materials from several Rapid City businesses, the staff at Edgewood built a so-called “hugging wall,” an 8-foot-tall, 6-foot-wide wooden structure that resembles a window frame in which visitors and guest can embrace. The two users are separated by a vinyl sheet that is cleaned after each use and are able to safely hug by wearing long plastic sleeves that typically would be used to artificially inseminate cattle. The plastic barriers prevent the spread of the coronavirus while allowing two people to fully embrace, Andersen said.

“The reactions from people the first time they touched a loved one, it was tears of joy, and actually staff cried too, because you could see the relief,” she said.

Doctors and caregivers have reported that patients with Alzeheimer’s or dementia have become withdrawn or show slowed mental cognition. Some patients have suffered falls, become more susceptible to infections and shown sudden frailty.

Lee Raines of Sioux Falls is suffering through what she said is the devastating decline of her husband, Tom, 82.

Tom was diagnosed with Alzheimer’s disease in 2015, Raines said, and he later moved to an assisted-living facility for safety. The disease took a toll on his mind and body, but since the pandemic struck in March, and restrictions on visitation were implemented, his decline has become more rapid.

His physical condition has also deteriorated amid the pandemic, Raines said, noting that Tom, 82, has lost more than 20 pounds.

Now, they are only able to visit briefly together outside, six feet apart, with no touching allowed.

“Sometimes I cry all the way home,” she said. “It just breaks your heart, it really does.”