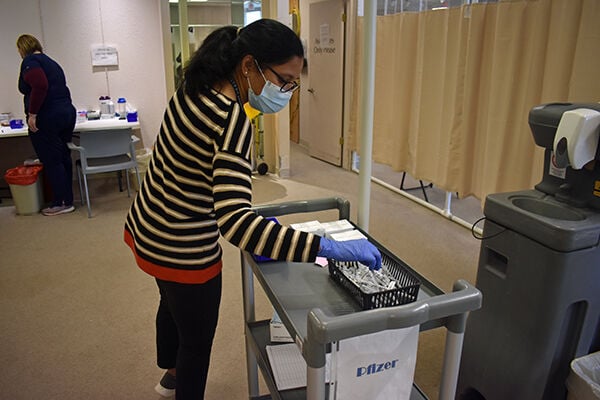 As syringes are filled, they are placed in a basket which nurses pick up and use on patients at the COVID-19 vaccination clinic in Rapid City. Pioneer photo by Deb Holland 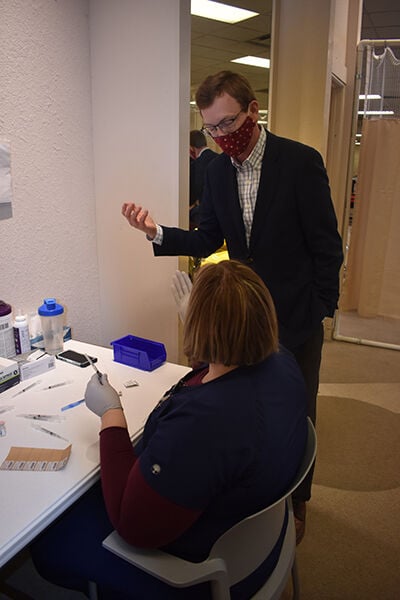 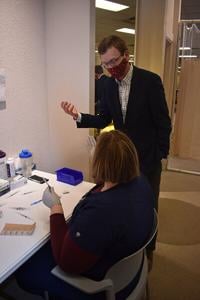 As syringes are filled, they are placed in a basket which nurses pick up and use on patients at the COVID-19 vaccination clinic in Rapid City. Pioneer photo by Deb Holland

EDITOR’S NOTE: This is the last in a series of stories about the COVID-19 vaccine.

RAPID CITY — A sense of enthusiasm and optimism permeates the Monument Health COVID-19 vaccination clinic in the former Herberger’s store at the Rushmore Mall in Rapid City.

“You don’t see people smiling this big normally when they are seeing medical providers, but everyone understands that this is the pathway to healthiness. This is the pathway to getting back to normal,” said South Dakota Rep. Dusty Johnson who recently toured the clinic.

He said it was exciting to see the enthusiasm at the clinic.

“There is an almost giddiness here that you normally associate with kindergarten classrooms. People are really happy to be here. This is the light at the end of the tunnel,” he said.

But it also falls on the federal government to see that the pipeline for the vaccine continues to flow, Johnson said.

“We need the production of more vaccine. I know that we are getting close to the end of the road, but we would not want America to become complacent,” he said.

Currently, both Pfizer and Moderna are manufacturing doses at full capacity, and together release between 12 million and 18 million doses each week. The state of South Dakota, through its healthcare providers, gets less than 20,000 doses per week.

Pfizer and Moderna say their factories are ramping up and expanding capacity each week and the Johnson & Johnson vaccine has just been approved, but there is a worldwide race to develop vaccines that use a finite amount of resources.

The Biden administration has indicated it would continue to use the Defense Production Act to boost supplies needed.

Meanwhile, Monument Health officials say they are using their allotment of doses as fast as they receive them both at the Rapid City vaccination clinic and clinics across the Black Hills.

Seeing a mall turned into a medical facility which provides nearly 900 vaccinations a day is amazing, Johnson said.

“This is what ingenuity and this is what medical capability is going to be able to provide,” he said.

In talking with patients at the clinic, Johnson said he was impressed with the efficiency of the operation and heard no negative comments.

“They all talked about how easy it was to get in. And, how efficient it was to be processed through,” he said.

Johnson admits he had a preconceived idea that the process would take much longer than it did for each of the patients. Johnson shadowed Joan Petersen of Rapid City as she went through the process of getting her shot. He said he was amazed at how quickly the process went.

Getting the vaccine is an incredibly important act that Americans can take, not just for their own health, but for the health of their communities, their families and for this country, Johnson said.

“I am going to that much more of an advocate of vaccinations after seeing how easy and efficient this was,” he said.

Johnson said he understands there is a certain amount of vaccine hesitancy among citizens, but history has shown that vaccines can be a game changer.

Johnson himself was offered a vaccination when the vaccine was first rolled out, but has waited for his turn.

“I will absolutely get the vaccine. I don’t have any vaccine hesitancy, but I do understand that a lot of South Dakotans were uncomfortable with the idea that an elected official 44 years old and relatively health would cut to the front of the line,” he said.

South Dakota has been among the leaders in providing vaccinations for its citizens.

“The fact that they are able to get vaccine into the arms as quickly as they are able to receive the inventory is a huge testament to Monument Health, other providers and everyone else involved,” he said.

Johnson said he has been bragging about South Dakota’s vaccination success to anyone who will listen.

But there is still work to be done, he said. There needs to be additional federal investment in vaccinations.

Healthcare providers had a tough year in 2020 because they cancelled a lot of elective surgeries and assumed additional expenses that came with being ready to serve their communities during the pandemic, Johnson said.

“We want to make sure that they are able to do what they need to do operationally without assuming additional financial harm. The federal government has got to be willing to step up and provide them with the resources they need to get the shots in the arms,” he said.

Clayton Christensen, senior director of ambulatory and clinic operations for Monument Health, said the vaccination clinic at the former Herberger’s store has the capability of providing up to 1,300 shots per day.

“We are comfortable with pace we are at right now. We are ahead of our vaccine supply. To do more would mean more space, more vaccine supply, more caregivers working in the operation,” he said.

Currently, the shots are free for everyone, he said.

“We bill the state back for our hours that we spend here. Right now we can bill the state for about $250 per hour for this operation,” Christensen said.

As of last week, Monument Health had given about 27,000 vaccinations.

On a personal note, Johnson said having the vaccine has meant a new sense of optimism for his in-laws.

“They have not spent as much time with my children as they would have liked to in the last year. That extracts a legitimate emotional toll across this country in every community,” he said. We have a tendency to talk about these things in raw numbers and in cases and hospital beds and vaccines delivered, but we also need to measure the success in chorus concerts attended, birthdays attended and hugs given. We have been deficient in those areas for one year. It is time for us to get back to normal.”