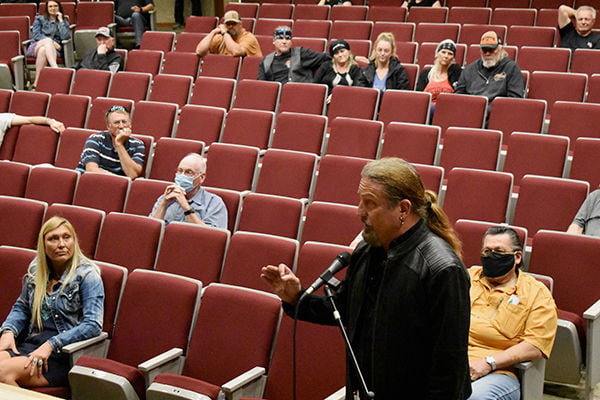 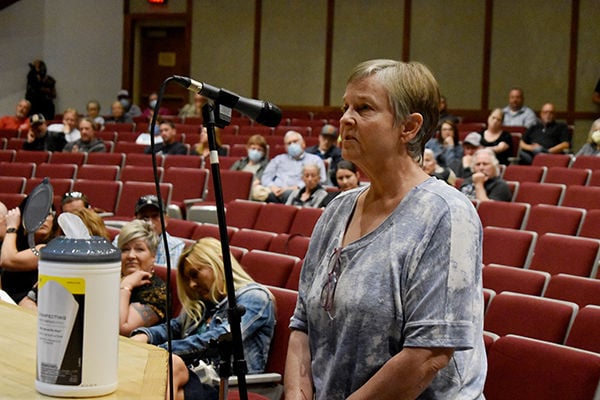 Marcia Johnston, who was born and raised in Sturgis, is a Sturgis business owner and president of the Sturgis Rally Charities Foundation, said that as a former Sturgis City Council member she empathizes with the current board having to make the difficult decision about the Rally. Pioneer photo by Deb Holland

Marcia Johnston, who was born and raised in Sturgis, is a Sturgis business owner and president of the Sturgis Rally Charities Foundation, said that as a former Sturgis City Council member she empathizes with the current board having to make the difficult decision about the Rally. Pioneer photo by Deb Holland

STURGIS — At an emotionally charged town-hall meeting Monday, Sturgis City Council members heard testimony for and against hosting this year’s 80th Sturgis Motorcycle Rally in light of the COVID-19 pandemic.

The council will use that information to make a decision at their meeting June 15 on whether to forge ahead with this year’s Rally, modify the Rally or postpone it for a year. More than 100 people were on hand for the meeting with about two dozen offering comments. Those speaking ranged from bartenders to nurses, and campground owners to retirees.

Sturgis resident Linda Chaplin, who has lived in Sturgis for more than 54 years, said she believes it should be the top responsibility of the Sturgis city government to look out for the health and well-being of its citizens.

“It is my deepest conviction, and I have relayed that to all of you, that this is a huge, foolish mistake to make to host the Rally this year,” she said. “Postpone it until next year. Have a big one next year.”

Longtime Sturgis businessman Bob Davis said closing down businesses in Sturgis when the coronavirus first began to spread in other areas of the country may have been an overreaction.

“I think canceling the Rally would probably be the biggest overreaction that we could possibly make,” Davis said. “Anytime a decision is made based on fear, on emotion, based on wishful thinking, you are not going to have a good decision. When in history has a good decision been made because of fear?”

Davis said that based on South Dakota hosting the big July Fourth celebration at Mount Rushmore, it should grab the opportunity of hosting the Rally this year. But regardless of the council’s decision, Davis said he and other business people in the community will support it. And he reminded council members that people will still come to Sturgis for the Rally no matter what the council’s decision.

Marcia Johnston, who was born and raised in Sturgis, is a Sturgis business owner and president of the Sturgis Rally Charities Foundation, said that as a former Sturgis City Council member she empathizes with the current board.

“This is not an easy decision to make,” she said.

As a member of the Sturgis First Presbyterian Church, Johnston said the congregation recently made the decision to cancel their Rally breakfast which they have hosted since 1975. They cancelled it one other time, but this year’s decision was because so many of the volunteers are older and fit the at-risk group for COVID-19, Johnston said.

“We have an older generation at our church. We don’t want to put them at risk, or make them feel like they have to make a decision between them staying healthy and helping the church,” she said.

Going ahead with the Rally is the right thing to do, Dane Senser told the council. He hopes to display the world’s largest American flag at this year’s Rally with the help of veterans.

“We’ve been cooped up, wrapped up for three months now. People want to get out and enjoy their freedom again. Give them that opportunity. Don’t deny them,” said Senser.

Jesse James Dupree, co-owner of Pappy Hoel Campground and Full Throttle Saloon along with Michael Ballard, told city council members that he doesn’t believe any of the motorcycle enthusiasts who have been coming to the Rally for years have any ill intent to come and make anybody sick.

Dupree said the city needs to get the message out to people who want to come to the Rally this year about what is expected of attendees to help curb the spread of the coronavirus.

“We have 600 acres. You can social distance your rear end off out there,” Dupree said of Pappy Hoel Campground.

Making sure people stay safe at the Rally is about personal responsibility, Dupree said.

“It’s not about the mayor or the governor, the president or anybody. … It’s about people coming out here and respecting each other, respecting the guidelines that the city council is going to put together,” he said. “Come. Be safe. Respect our community, and enjoy the Black Hills.”

They'll hold the rally and we'll have a giant spike in COVID cases just in time for winter. We're already seeing spikes in states that reopened too soon, what makes them think it will be any different here? Even considering holding the rally is reckless.

Is there anyone out there that believes that the CIty of Sturgis will cancel the rally?

I'll readily admit I'm not out and about in establishments to see personally what the behavior of customers is like -- but from all I've heard probably fewer than 1 in 10 of the folks rambling into establishments are masked up. It's reckless garbage to imagine that people are gonna exercise personal responsibility to keep the folks working the rally -- let alone attending it -- safe...but, a lot of money will be made...so, there's that.