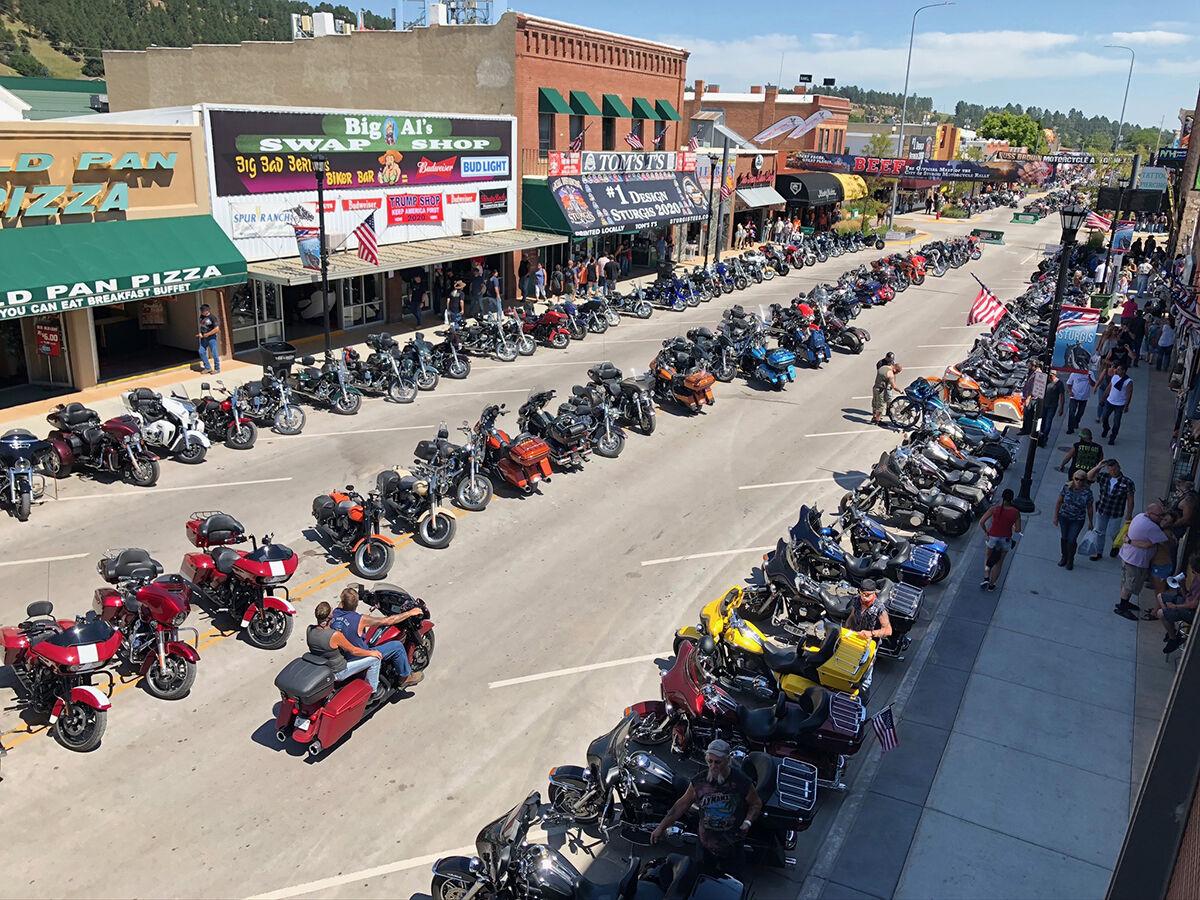 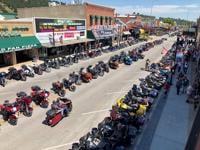 Vehicle counts at nine locations around Sturgis show estimated attendance at this year’s Sturgis Motorcycle Rally is down about 6% through Tuesday. Pioneer photo by Deb Holland

Vehicle counts at nine locations around Sturgis show estimated attendance at this year’s Sturgis Motorcycle Rally is down about 6% through Tuesday. Pioneer photo by Deb Holland

STURGIS — At the half-way point of the 80th Sturgis Motorcycle Rally numbers show attendance at this year’s event is down slightly, but spending by those who are here is up over last year.

Rodney Norton of Longview, Texas, said he and his wife, Gayle, were spending “lots” of money in Sturgis during their visit for the Rally. On Monday they were shopping for carrots at Sturgis Grocery Mart.

“We’re staying out at the Full Throttle. This is our third trip to buy carrots for the rabbits. They got lots of rabbits, and we enjoy sittin’ there feeding them when we’re not riding,” he said.

Norton said he had kept tabs on the news hoping this year’s Sturgis Rally wouldn’t be canceled.

“I think there is more people than what we anticipated. We’ve had a wonderful time,” he said.

Sturgis City Manager Daniel Ainslie agrees. The city has known that because of the COVID-19 pandemic numbers would be down.

“We thought attendance was going to be quite a bit lower, especially given that international tourists make up 5 to 10%,” Ainslie said.

Vehicle counts at nine locations through the Sturgis area show numbers are down about 6% from 287,709 for the first five days last year to 270,488 this year.

Also, the city stopped its advertising for this year’s Rally months ago.

“We haven’t been promoting it for months plus we cancelled all the city activities. People have been telling us that they were coming no matter what and that’s what we are seeing,” he said.

Ainslie said people have wanted to escape from where they have been cooped up.

“They wanted to get out and enjoy the Black Hills,” he said.

Year-round businesses throughout Sturgis, who have been willing to share their sales figures with the city, show that for the first three days of the Rally sales were up by double digits, Ainslie said.

And, the city owned liquor store is shattering all sorts of sales records. One downtown bar owner said people aren’t frequenting the bars as much this year. Instead, they are grabbing a bottle or a six pack, and heading out to wherever they are staying to party.

Temporary vendor licenses year to date are down about 20%, city officials said.

Among those noticeably absent from this year’s Rally is long-time Rally sponsor Harley-Davidson.

A spokesperson for Harley-Davidson said the company is focusing their support in ways that are consistent with their health and safety goals instead of large consumer activations.

“Fortunately, the Sturgis Rally isn’t restricted to concerts and parties – the true experience is rooted in riding and the spectacular routes that surround the event,” the spokesperson said. “We are encouraging socially distanced riding through our Let’s Ride campaign.”

Although law enforcement figures show some categories of arrests at this year’s Rally are up higher than last year, both the Sturgis Police and Meade County Sheriff’s Department say this year’s event has been relatively quiet.

Meade County Sheriff Ron Merwin said he believes the attendance at this year’s Rally is down.

“In my opinion the traffic is a lot higher, but the walkers are a lot lower. I think they are staying out of crowds. Instead they are out riding and then heading back to the campgrounds,” he said.

Merwin characterized those attending the Rally this year as “typical” bikers.

“They want the freedom. They are out to ride. It’s not a lot of weekend riders,” Merwin said.