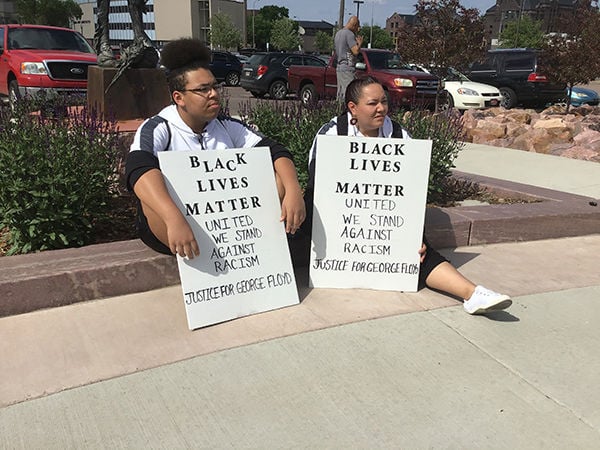 Ramona Redwing of Brookings and her son Jerrell Lodge of Brookings attended to add their voices to a call for an end to injustice and racism. Photo courtesy of Tom Lawrence 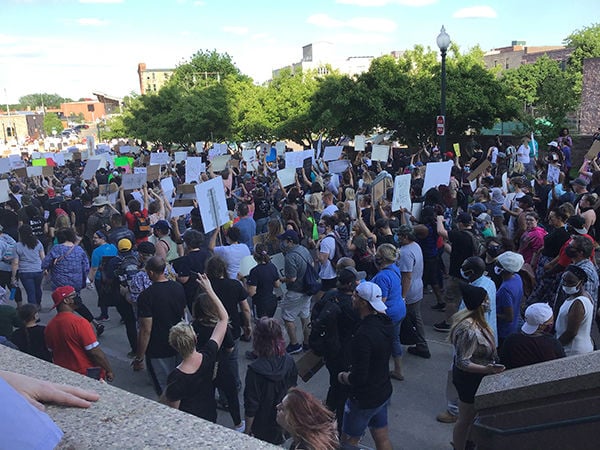 A crowd of more than 1,000 people marched, chanted and rallied for peace, an end to racism and social justice on Sunday in Sioux Falls. The peaceful gathering in the afternoon was in marked contrast to the end of evening, as some protestors pelted police with rocks, shattered windows at local businesses in and around the Empire Mall and forced the city to declare a state of emergency.  Photo courtesy of Tom Lawrence

Ramona Redwing of Brookings and her son Jerrell Lodge of Brookings attended to add their voices to a call for an end to injustice and racism. Photo courtesy of Tom Lawrence

A crowd of more than 1,000 people marched, chanted and rallied for peace, an end to racism and social justice on Sunday in Sioux Falls. The peaceful gathering in the afternoon was in marked contrast to the end of evening, as some protestors pelted police with rocks, shattered windows at local businesses in and around the Empire Mall and forced the city to declare a state of emergency.  Photo courtesy of Tom Lawrence

More than 1,000 people gathered in downtown Sioux Falls Sunday afternoon. They spoke about peace and love and defeating racism.

The most common two words were George Floyd.

The 46-year-old Minneapolis man was killed Monday, May 24, when three Minneapolis police officers held him down, one with a knee on his neck. His torturous death was captured on video that was released to the world a day later, sparking protests, riots and violence across the country.

As fires burned in cities across the nation, the protest arrived in Sioux Falls last weekend. A small protest was held Saturday but a major event took place Sunday afternoon and evening.

After hours of peaceful marches and inspiring speeches, the day took an ugly turn at dark, as a few dozen people amidst the crowd of protestors chose to throw rocks at police vehicles, to shatter windows and try to break into businesses and seek a confrontation.

Mayor Paul TenHaken was forced to declare a citywide state of emergency. Tear gas and rubber bullets were fired and 70 members of the South Dakota National Guard were activated by Gov. Kristi Noem and sent to the Empire Mall, where the trouble was happening.

How did the day take such a turn for the worse?

It started at Van Eps Park, as hundreds of people gathered for the 5 p.m. rally centered around a statue of Dr. Martin Luther King Jr.

I spoke with a Brookings woman and her son, who felt compelled to attend.

“To protest against injustice and racism,” said Ramona Redwing, 35, who is Native American. Her son Jerrell Lodge, 15, is both Native and black.

Floyd’s death was “heartbreaking,” Redwing said. “Something needs to change.”

She said she is concerned for her son’s safety.

“I feel unfortunately my son has a target on him because of his skin color,” Redwing said.

Standing near them was Autumn Gallagher of Sioux Falls. Gallagher wore a shirt that said she wanted to be able to say she had shared love in her life.

Gallagher said she had been sitting on her butt for 35 years and enjoying white privilege. It was time to stand up and be counted, she said.

Julian Beaudion spoke next to the Dr. Martin Luther King Jr. status in Van Eps Park. He is a state trooper, a community activist and a Sioux Falls City Council candidate in Tuesday’s election.

Beaudion said he was “terrified” to speak in some ways. He said he feared for his safety and that of his family, and worried he would be ostracized by other law enforcement officers.

Other people in the crowd shared his emotions, he said. But, Beaudion said, they came to the rally because it was vitally important.

He asked black people to raise their right fists in the air, saying it stood for unity, power and solidarity. Then he asked everyone else to raise their left fists to become allies and accomplices in seeking justice and peace.

“At this moment, at this very moment, you will be our other halves,” Beaudion said.

In a foreshadowing of what was to happen, he said he might have to go to work that night. It’s unclear if he was in uniform Sunday night, but dozens of men and women from multiple agencies were deployed across the city.

The city and the Sioux Falls Police Department worked with organizers and issued a supportive tweet before the rally started, saying the department enjoyed a good relationship with the community.

“Today will be no exception as we have worked with many community leaders in helping to facilitate a protest in reference to George Floyd’s tragic death in Minneapolis, and making sure it is done safely,” the police said. “We respect your 1st Amendment rights and want you to be heard. Today is Sioux Falls’ opportunity to proudly show the world the great example of how community and police can work together and do things with grace and peace, while respecting all those involved. #OneSiouxFalls.”

Another mini-rally started at the other end of the park, as two young men led people there in chanting, “No justice, no peace,” and “Say his name, George Floyd.”

One of the duo, his passion clear, said there was a clear reason for the rally.

“We’re here because my brothers and sisters are dying!” he said. “Take a look at us today. This is what America is supposed to look like.”

One of the speakers was Selwyn Jones of Gettysburg, who came with his wife Joie. Jones spoke from a deeply personal perspective — he is George Floyd’s uncle.

After the speeches, the massive crowd moved to the Minnehaha County Courthouse and then to the Law Enforcement Center for more speeches and chants. The event ended around 6:30 p.m. with people feeling upbeat and proud that it had come off so well.

Then, hundreds of people continued to march together, winding through the city in an unplanned addition to the event. They headed to the Empire Mall, and on the way, the mood started to shift.

By the time they arrived at the mall, some wanted trouble. They decided to emulate the rallies and riots they had seen on TV, and for several hours, they tried to do just that.

On their Facebook page, the organizers had sounded a hopeful note: “This is a peaceful protest. We do not associate with anyone who has rioting/ malicious intentions.”

That was the goal. It remains a worthwhile one, but the reality was, and is, it’s difficult to obtain.