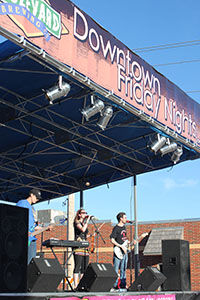 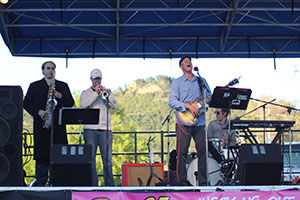 SPEARFISH — For the fifth year, Downtown Friday Nights will shut down Spearfish Main Street as the crowds come out for the live music, shopping, children’s activities, and socializing that happen during the free outdoor series.

The event runs from 6-9 p.m. each Friday and kicks off this week with Chancey Williams & The Younger Brothers taking the stage.

Downtown Friday Nights grew out of First Fridays, a monthly event that started in 2005, and since then, it’s continued to grow, in terms of crowd numbers and quality of entertainment. Scott Temple, one of the organizers for the summer series, said the event has surpassed expectations.

“Nobody knew it was going to be this,” he said, describing that at the beginning, the organizers thought that if the event drew 1,000 people each week, it would be great.

“We had no idea … It’s turned out to be this thing, this giant thing,” he said, adding that on an average Friday now, the organizers expect 4,000 to 5,000 people to come through. “The town plans its week around it now,” he said, explaining that other towns in the region have mimicked the event after seeing Spearfish’s success.

Downtown Friday Nights has been noted on various websites listing Spearfish as one of best places to live or visit, as well. Spearfish was recently named to Livability.com’s “Top 100 Best Small Towns 2015,” and in the website’s article describing why Spearfish made the list, it states, “One of the downtown’s highlights, however, takes place outside, every summer, when the city hosts its Friday night concert series.”

While Temple pointed out the quality of entertainment present each week, he noted that July 31 will bring a whole new element to the Downtown Friday Night stage, which will be expanded to accommodate the dancers, light show, and presence of Brulé. The award-winning group’s show “consists of a 5-piece rock ensemble augmented with an array of traditional Native American instrumentation. Paired with the stunning steps of one of the top Native American dance troupes, their authenticity brings a multi-dimensional art form to this cultural rock opera. The musical journey of Brulé’s founder, Paul LaRoche, adds an affecting story to audiences, and the result is Native America meets Pink Floyd in a spectacular theatrical stage production of sight, sound, and soul,” states Brulé’s website.

The Budweiser Clydesdales will again make an appearance at Downtown Friday Nights during the Sturgis Motorcycle Rally, as well.

Street closures take place from approximately 3:30-10 p.m. on Main Street from Illinois to Grant streets, and on Hudson Street from Seventh Street to the alley between Fifth and Main streets.

The layout this year will feature more tables in the Hudson intersection, with the vendors circling the open space. Volunteers with the Spearfish Community Coalition will check IDs for wristbands, as in the past, and Temple voiced his appreciation to the organization for its help in keeping the event safe and family-friendly.

“It’s going to be an awesome summer,” Temple said.

The 2015 Downtown Friday Nights line-up is as follows:

• July 17 — Corvette Show and Shine; Walt Keys & Unfinished Business (This is not a DFN-planned event; there will be fewer vendors and kids activities.)